Mammals are often a major focus of conservation activism and public awareness. As with birds, the public pays close attention to the potential impacts of IDOT projects on mammals. Our surveys provide an assessment of the mammalian fauna in the project areas as required by federal and state statutes and regulations. We survey specifically for federally and state-endangered species. We use historical data (e.g., IDNR Natural Heritage Database, museum specimens) to help determine which species may be present in a given project area. Field surveys of mammals are conducted through capture-and-release programs using a variety of live-traps and mist-nets appropriate for the target species. 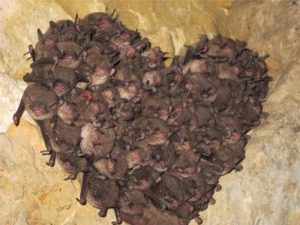 The focus of many of our surveys is the federally and state-endangered Indiana bat (Myotis sodalis). This rare species is small (~ 8 g) and spends summer days roosting beneath slabs of loose, peeling bark on dead trees or the “shaggy” bark of certain live trees. Surveys to determine the Indiana bat’s presence involve mist-netting at night. Mist-netting sites are established in areas that we determine to be suitable habitat for Indiana bats, based on the presence of potential roost trees. At each site, 2 sets of black nylon mist-nets are suspended over a likely flyway for bats, most often a stream or small river. The nets are opened at dusk and monitored continuously for the first 30 minutes of netting. They are then checked every 10 minutes over the course of the next 5 hours. The reproductive state, age class, weight, and overall condition of each captured bat are determined and the animals are released at the point of capture. 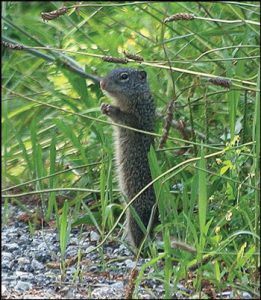 Franklin’s ground squirrel (Poliocitellus franklinii), listed as a threatened species in Illinois, is also a major focus of our surveys for IDOT in northern and central Illinois. This animal spends most of its life underground. It is a true hibernator and only active above ground during the summer. These ground squirrels have fairly restrictive habitat requirements (areas with vegetation that is not regularly mowed and moderately to well- drained soil). Therefore, the first step in a Franklin’s ground squirrel survey is to identify habitat patches in the project area that might support them. We perform the assessment by visiting the project area to look at the vegetation and consulting Natural Resource Conservation Service soil maps. We then use live-traps, laid out in lines or grids, to determine the presence or absence of Franklin’s ground squirrels in these patches. Traps are baited with popcorn and set in the morning (because the animal is diurnal). They are checked in early afternoon and again in late afternoon. Trapping continues for 3 consecutive days. The reproductive status and weight of each captured ground squirrel are recorded, and a small patch of fur on the animal’s side is clipped. This allows us to recognize any animals that are trapped again and determine the number of individuals caught at the trapping site. The ground squirrels are then released at the trap location.

Two other state-threatened rodents, the marsh rice rat (Oryzomys palustris) and golden mouse (Ochrotomys nuttalli), are the focus of surveys in southern Illinois. The rice rat is primarily a resident of wetland habitats, whereas the golden mouse occupies wooded or shrubby areas. After identifying suitable habitat for one or both species during visits to the project area, trap lines or grids are established. Sherman live-traps are baited with a mixture of rolled oats and peanut butter. Traps for rice rats are placed near water; some of the traps for golden mice are placed above ground in shrubs or masses of vines because the species is largely arboreal. Traps are set during late afternoon and checked for 3 consecutive mornings. As in Franklin’s ground squirrel surveys, each captured animal’s reproductive condition is determined and it is marked and released.