Birds have long been a major focus of public attention and conservation efforts. Neotropical migrants, raptors such as Bald Eagles and Peregrine Falcons, and game species such as waterfowl, are of special concern to conservation groups, hunters and the general public. Less recognized birds such as forest interior species are also of particular concern and have been shown to be in decline.

Neotropical migrants, such as the Rose-breasted Grosbeak, pictured below, are birds that spend most of the year in subtropical or tropical latitudes and breed in temperate areas. This group relies on habitats in far distant latitudes for breeding, migration and overwintering. Because habitat alteration and loss in several latitudes (e.g. the Amazon and Illinois) can negatively affect these species, many of their populations are in decline. Preservation efforts aimed at this group of birds extends across the Americas, and several large conservation organizations are specifically dedicated to tracking the health of these populations across their vast ranges. 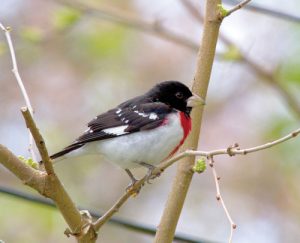 While few bird species use roadsides for nesting or foraging, many others can be negatively impacted by road improvements and new construction. When new transportation projects are proposed, The Illinois Department of Transportation (IDOT) works closely with the Biological Surveys and Assessment Program to assess potential impacts on bird species. During the planning phase of each survey, we consult multiple databases (e.g. IDNR Natural Heritage Database, The Illinois Breeding Bird Atlas, the North American Breeding Bird Survey) as well as current conservation recommendations of state, national and international monitoring plans (i.e. The Illinois Wildlife Action Plan, The Partners in Flight, International Union for Conservation of Nature Red List) to assess the potential for bird species, specifically those that have been identified to be in need of special protection, to occur in a given project area. We also assess the available habitat in project areas for species of conservation concern. We estimate the number of birds of different species in project areas using standard practices such as timed counts during which all of the birds seen or heard in an area are recorded. Broadcasts of mating calls are used to draw out and elicit calls from difficult to detect species. 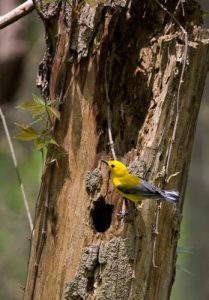 Our group also conducts research on a variety of ornithological topics. Dr. Wendy Schelsky’s research focuses on how extra-pair mating differentially influences breeding and dispersal decisions of the sexes in the Prothonotary Warbler (Protonotaria citrea), a socially monogamous songbird in Illinois. Her research shows that male warblers monitor the success of neighboring nests that contained their extra-pair offspring whereas females sought out extra-pair fertilization from males that were less related to them than their social mates, suggesting that small songbirds have sophisticated ways of enhancing their reproductive success.