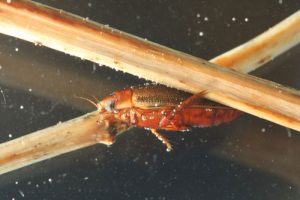 Aquatic macroinvertebrates (insects and other organisms) vary widely in their vulnerability to environmental perturbations. Some species can survive and occasionally prosper in extremely polluted waters, while others require clear, clean, relatively pristine conditions to survive and reproduce successfully. Because of this range of tolerance levels, and because insects are less mobile than larger aquatic and semi-aquatic vertebrate groups such as fishes, amphibians and reptiles, aquatic insects and other small macroinvertebrates (amphipods, isopods, crayfishes, oligochaete worms, flatworms, leeches, horsehair worms, and smaller mollusks such as fingernail clams and snails) can be used to determine the quality of aquatic habitats better than a single point sample of water or sediment. Biologists have studied these tolerance differences and used them to create an Index of Biotic Integrity (IBI) that is based on which macroinvertebrates are present and their relative abundance in a given stream. 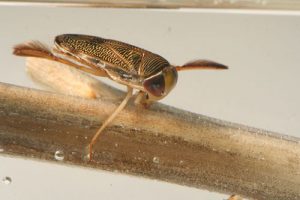 During the years 2008 through 2011, nearly 250 aquatic macroinvertebrate samples (including mostly insects) were collected from 50 sites associated with IDOT highway projects across Illinois.  Over 23,500 animals representing 5 phyla, at least 75 families, and more than 350 taxa were sorted and identified from these samples. In 2012, 1,370 taxa representing 4 phyla, 7 classes, 16 orders, 40 families, and over 50 genera were collected from 6 sites in 3 project areas.  Surveys that we conduct at IDOT project sites catalog the stream macroinvertebrates and produce site-specific IBI scores. These scores serve as one of several parameters that, along with the results of habitat assessments and surveys for other groups of flora and fauna and water quality monitoring assist IDOT and other personnel in decisions that ultimately guide optimal placement of roadway alignments, bridges, and other rural, suburban, and metropolitan transportation corridors such as bicycle and pedestrian trails. Although only a few state or federally listed aquatic macroinvertebrates occur in Illinois — most notably the Hine’s emerald dragonfly (Somatochlora hineana) and the Illinois cave amphipod (Gammarus acherondytes) — we also assess project alignments for the potential presence of listed taxa, those under consideration for such listing, and those considered rare in the state.