The Phylum Annelida, or true-segmented worms, includes the Acanthobdellida (bristle worms), Branchiobdellida (crayfish worms), Hirudinida (leeches), oligochaetous Clitellata (microdrile oligochaetes and earthworms), and Polychaeta (sand worms, tube worms, or clam worms – primarily marine); with the exception of the acanthobdellidans (restricted to boreal, or arctic marine systems), one or more species in each of these other groups occurs in Illinois, including several freshwater species in the polychaete family, Aeolosomatidae (head-crawling, or suction-feeding worms), and 1-2 freshwater polychaetes in Lake Michigan.

Diversity of annelids in Illinois

At present, 86 aquatic oligochaetes, 34 leeches, 9 branchiobdellidans, 3 aphanoneurans, and 38 earthworms occur in Illinois. Of these, several are considered rare in the state, including a few that are known from only a few other localities in North America. Illinois is the type locality for 21 aquatic and terrestrial oligochaetes and leeches first described as species new to science. Type material for seven of these species is held in the INHS Annelida Collection. Some of the early work on annelids in Illinois included studies by Harrison Garman, Stephen A. Forbes, Frank Smith, Paul S. Welch, and Walter J. Harman – all associated with the INHS and/or the University of Illinois. Collectively, Garman, Forbes, Smith, and Welch described 13 species new to science from localities in this state.  In 1986, Harman’s field notes and his extensive collection of earthworms from central Illinois, obtained during his doctoral research at the University of Illinois, were donated to the INHS Annelida Collection. 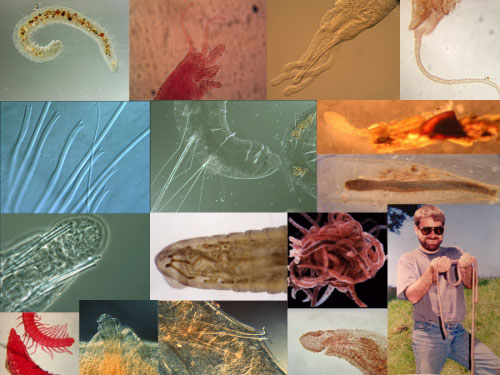 The INHS Annelid Collection is the largest state collection of freshwater annelids in the U.S., and ranks third size (behind the U.S. National Museum-Smithsonian Institution in Washington, D.C. and the Royal Ontario Museum in Toronto, Canada) in number of curated specimens. Between the early 1980s and the present, the INHS Annelida Collection has grown in holdings from fewer than 5,000 specimens to over 340,000 (over 7,500 lots, or collections). Because oligochaetes are a common and often the dominant group of organisms in aquatic macroinvertebrate samples, a significant number of specimens in this collection were identified from samples obtained during surveys for aquatic resources by INHS Biological Surveys and Assessment Program (BSAP) personnel in streams and other aquatic and semi-aquatic habitats associated with IDOT project areas throughout the state. During 2012, 984 microdrile oligochaete worms, 12 branchiobdellidans (crayfish worms), and 31 leeches (collectively representing four orders, five families, and 20 genera) were identified from collections in streams associated with or adjacent to three IDOT project sites in Illinois. In addition, 155 earthworms, representing three families and at least six genera, were collected from these habitats.

New county and drainage basin records in the state for both aquatic and terrestrial worms have been established during our BSAP surveys, and specimens representing new state records for five aquatic oligochaetes and three earthworms were documented in IDOT project areas.  Over 70% of the freshwater oligochaetes in the collection are permanently mounted on microscope slides, while the remaining specimens are stored in alcohol in vials, jars, and tubes. The INHS Annelida Collection includes representatives of many species with limited known distributions in North America, although none is listed as endangered or threatened at the federal or state level. The geographic scope of this collection: 76% from Illinois, 23% from elsewhere in North America (all 50 states plus four Canadian provinces), and 1% from 20 other countries.

A computer database for the collection was recently restructured to better organize and present metadata associated with specimens in this collection. This database will also include the results of an ongoing collections profiling exercise – implemented to assess the ‘health’ of the collection. More specifically, this profiling exercise allows us to review a) the integrity of specimens and their storage units, e.g., vials, jars, tubes (for sorted and unsorted wet collections, primarily those preserved in alcohol or buffered formalin), and slide boxes (for specimens permanently mounted on microscope slides), b) the completeness integrity, and quality of labels associated with the specimens (labels included in the containers holding wet preserved specimens, or labels affixed to microscope slides), and c) the breadth, quality, and accuracy of data associated with each specimen. The initial observations recorded during a profiling exercise allow curators and collections managers to respond immediately to critical issues (dessication, infestation, deterioration), as well as provide justification for current and future funding to maintain biological holdings at an optimal level. Regular collection maintenance is critical to preserving historical and recent collections and their associated data for current and future reference by INHS personnel (when preparing background information for environmental assessment projects as well as their independent and collaborative research), and by other researchers in Illinois, the U.S., and elsewhere in the world to compliment their ecological, taxonomic, systematic, and biodiversity studies and research programs.