One hundred four species of amphibians and reptiles have been recognized within the boundaries of Illinois. Illinois boasts 20 salamander species and 21 frog and toad species. Amphibians are constrained to wet or moist environments because their skin and egg membranes are permeable to water. Amphibians also have a biphasic lifestyle whereby they first go through a larval period prior to metamorphosis into adults. Reptiles are represented by 6 lizards, 17 turtles, and 40 snakes. Reptiles, on the other hand, are less dependent on water because they have a scaly waterproof skin and their eggs are protected by a thick shell. 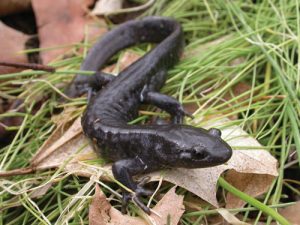 The Illinois Endangered Species Protection Board currently recognizes 9 amphibians and 18 reptiles as threatened or endangered in the state. This unfortunately means that more than 25% of our herpetofauna is at some level of risk for extinction in the near future. When these species occur in the vicinity of Illinois Department of Transportation (IDOT) projects, the Biological Surveys and Assessment Program conducts surveys for state-listed species and their associated habitats.

Survey methods vary by species, habitat, and even by season. For example, pond-breeding amphibians are best surveyed during the breeding season when they congregate at wetlands. During this time, frogs, such as Bird-voiced Treefrogs and Illinois Chorus Frogs, can be identified by their unique breeding calls. Other sampling methods include minnow traps, dip nets, or by hand. Stream and seep/marsh-dwelling salamanders such as the Dusky Salamander and Four-toed Salamander are surveyed for by visual encounters, transect surveys, or time-constrained searches, where researchers visually search an area, distance, or a particular period of time, examining all possible hiding spots in an attempt to find the species.

Sampling techniques also differ for turtles. Aquatic turtles are frequently sampled by using a large trap with funnel ends. Omnivorous species such as Blanding’s Turtles are trapped using smaller hoop traps baited with sardines, chicken livers, or bait fish. Vegetarian species such as River Cooters are trapped using larger hoop traps with long nets extended out into the water body in an attempt to intercept and funnel the turtles into the trap. Terrestrial reptiles including most snakes and Ornate Box Turtles are surveyed primarily by visual encounters. Recently trained dogs have been used to help researchers find terrestrial turtles for study.