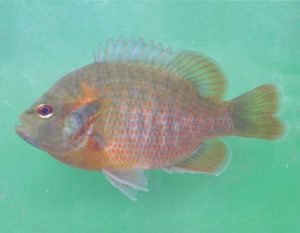 The redspotted sunfish (Lepomis miniatus) occurs in clear, slow-flowing, well-vegetated streams and backwater lakes from the Illinois River basin south through the Mississippi River Valley.  Within Illinois, it historically had a sporadic distribution that included bottomland lakes along the Illinois River, the LaRue-Pine Hills Ecological Area (Big Muddy River drainage), and backwater lakes along the Wabash and Ohio rivers.  Although never abundant in Illinois, the distribution of redspotted sunfish has been reduced in the state due to habitat destruction (e.g., drainage of backwater lakes) and poor water quality.  As a result of this reduction, it was listed as state-threatened in 1989 and has since been designated as state-endangered.

Beginning in 2004, the Illinois Department of Natural Resources (IDNR) and INHS have been performing status surveys for, and DNA analysis of redspotted sunfish populations in Illinois and boundary waters.  IDNR and INHS staff established a redspotted sunfish recovery team and established goals that included propagating the fish using offspring from the most genetically appropriate source population and releasing young-of-year (YOY) into restored Illinois River backwater lakes. Jeremy Tiemann (INHS), Trent Thomas (IDNR), Wendy Schelsky (INHS), and John Epifanio (INHS) are conducting this project to re-establish viable populations of redspotted sunfish in its historic range in the Illinois River basin. After DNA was analyzed by Dr. Schelsky and status data were finalized, the researchers began propagating the fish. From 2008-2010, sunfish were collected from Fish Creek (Sangamon River drainage) and stocked into research ponds.  Approximately 8,500 YOY were stocked into the 72-acre Fish Preserve Lake, a protected waterbody at Emiquon Nature Preserve, and 175 individuals were stocked into a 2-acre refuge pond at Mansion Pond in Allerton Park.  Redspotted sunfish spawned as age-1 individuals in both of the stocked waters.  As a result of this success, we were able to elaborate on our stocking efforts by translocating the fish to five additional suitable waters.