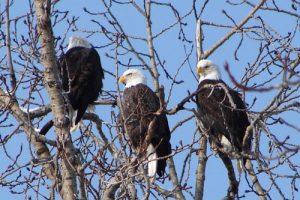 The Bald Eagle (Haliaeetus leucocephalus) is one of the species that we pay particular attention to during IDOT avian assessments. The Bald Eagle has a special place in America as our official national symbol. However, in the early 1970s the species was in grave trouble. It is not clear how abundant Bald Eagles were in Illinois prior to European settlement, but early explorers described it as a common breeding bird and as ‘extremely abundant’ on the big rivers of Illinois in the winter. The extinction of Bald Eagles was considered a real possibility by 1940. Harassment by humans, including bounties in several states, and habitat loss had decimated the population. The Bald Eagle Protection Act of 1940 was enacted by Congress in an attempt to end the wholesale slaughter. However, with the post-WWII introduction of the pesticide DDT and its relatives onto the landscape, Bald Eagles continued to decline. By 1963 the breeding population in the lower 48 states was estimated to be fewer than 500 pairs. The Endangered Species Preservation Act of 1966 and the Endangered Species Act of 1973 laid further ground work for Bald Eagle recovery, and in part because of its status as our national symbol, the bird became a focus of the environmental movement. Major habitat conservation efforts were undertaken in Illinois by the IDNR and the Illinois Audubon Society with innovative habitat protection and monitoring programs. Still, by 1985 only a single breeding pair of Bald Eagles survived in Illinois, and the over-wintering population on the Mississippi and Illinois rivers had dropped well below 600 individuals. 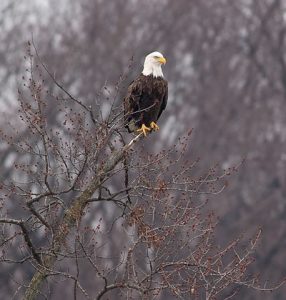 Today, Bald Eagle recovery is one of the success stories of endangered species protection efforts. Between 1963 and 2007, the number of breeding pairs in the lower 48 states increased from approximately 487 to over 11,000, and in 2007 the Bald Eagle was removed from the U.S. threatened and endangered species list. The bird was de-listed from Illinois’ state list in 2009. Wintering populations on the rivers of Illinois now average a few thousand birds annually, and it is estimated that 30 to 40 pairs of Bald Eagles currently nest in Illinois. Federal protection for this bird is still strong through the Bald and Golden Eagle Protection Act, and we will continue to monitor Bald Eagle activity near all IDOT projects in Illinois.