With March 3rd being World Hearing Day, WHO-ITU (World Health Organization and International Telecommunication Union) released a new standard for safe listening devices on February 12th, 2019. As our group researches on improving hearing through array processing, we also think that preventing hearing loss and taking care of our hearing is important. Hearing loss is almost permanent, and there are currently no treatment for restoring hearing once it is lost. In this post, I will revisit the new WHO-ITU standard for safe listening devices, and I will also test how loud my personal audio device is with respect to the new standard.

In the new WHO-ITU standard for safe listening devices, WHO-ITU recommends including the following four functions in audio devices (which is originally found here):

Below are the articles that I have referenced, and please read them if you would like to read more concerning safe listening and noise exposure:

How loud is too loud?

*dBA (A-weighted decibel) is a sound pressure level unit that is different from dB (decibel). I will discuss the differences more in depth in the next section.

Below is an example of a graph called “Equal-loudness contour”. (Originally from Wikipedia) 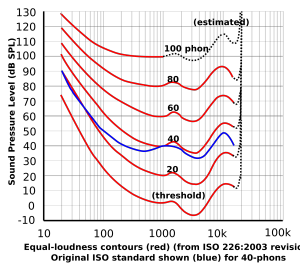 Until this point, I have summarized the new standard, which was issued by WHO-ITU, and went over how human perceives sound at different frequencies. However, it is hard to get an idea of what 80dB and 100dB sounds sound like. On the internet, there are resources, such as Noise Levels Chart and YouTube videos with white noise and sine waves at certain loudness, but those resources are still hard to understand. They are also too reliant on the listeners’ experience and environments, so we can hardly call those resources dependable and accurate. Also, Apple and other audio device makers tend to not publish their audio device’s specification with regard to loudness, so it is hard to gauge how loud our personal audio device is playing. In order to see how loud audio devices can be playing audio, I conducted a crude experiment, which I hope will be helpful to you as well!

In this experiment, I used a chunk of styrofoam, IPod Touch, earphones, and a decibel meter. In order to mimic the ear canal, I drilled a hole with a diameter of about 0.7cm through the styrofoam so that the distance between the earphone and the tip of the decibel meter was around 2.5cm. I used Betron ELR50 in the initial experiment with earphones, and later, I used V-moda Crossfade in the experiment with headphones. The decibel meter measured sound in A-weighted decibel unit, and it mentioned that it can measure accurately between 30dBA and 130dBA. The IPod Touch that I used is a 7th generation IPod Touch, and I have not set a volume limiter. In the experiment, I tested at three different slider placement: slider at slightly less than the halfway point, slider at around 80%, and slider at 100%. Finally, the audio source that I used in the experiment is this. By using an actual music in this experiment, I thought it is more relatable to how we normally use our audio devices. Also, the music used in this experiment is free to download, so you could conduct your own test as well if you would like to!

Below is a picture of the test setup: 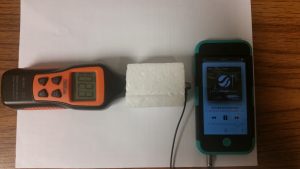 Slider at little less than the halfway point with earphones 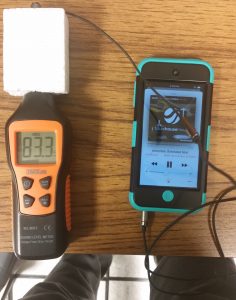 Slider at around 80% with earphones 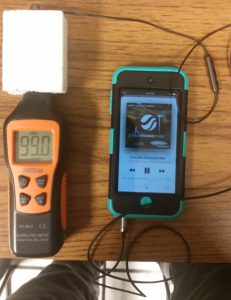 Now, the slider position is moved to the 80% position. With this slider position, it was seen that the loudness of the audio fluctuated between 89dBA and 106dBA. This volume is above the new standard by quite a bit. Note that since decibel is a log scale unit, even the difference of 10dBA can be significant.

Slider at 100% with earphones 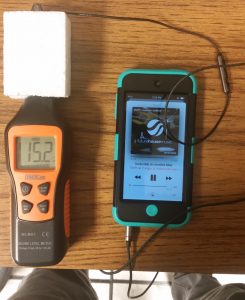 This is the last experiment with earphones, where the slider is moved to the max volume position. While testing, I was able to hear the music even without earphones directly in my ear. With this slider position, it was seen that the loudness of the audio fluctuated between 102dBA and 118dBA. Considering that the threshold of pain, or the sound pressure level in which human starts to feel pain from a sound source, is 120dB, seeing that max volume of an IPod Touch can emit volume close the threshold is frightening.

Slider at little less than the halfway point with headphones 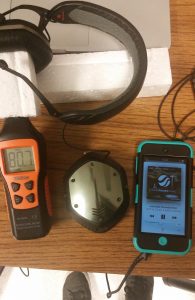 Slider at around 80% with headphones 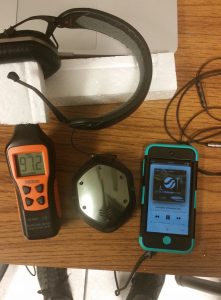 Now, the slider position is moved to the 80% position. With this slider position, it was seen that the loudness of the audio fluctuated between 89dBA and 95dBA.

Slider at 100% with headphones 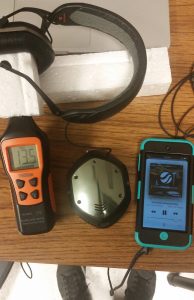 Lastly, the slider position is moved to the max volume position. With this slider position, it was seen that the loudness of the audio fluctuated between 98dBA and 114dBA.

Conclusion of the crude experiment

As seen from the above results, the loudness from the audio device exceeded the new WHO-ITU standard even when the slider was positioned at slightly less than the halfway point. I have seen some articles recommending the slider to be at 80% for safe listening, but the volume at 80% position was well above the safe listening levels.

Noise-cancelling headphones are not perfect either…

So far, we have discussed the new WHO-ITU standard and how it compares to sound emitted from audio devices today. However, we have not mentioned any concrete ways in which people could prevent hearing damage and hearing loss.