While many support stricter regulations on guns in the United States, many others oppose these restrictions. Strongly supported by the NRA, gun activists believe that creating stricter gun laws would violate the Second Amendment of the Constitution which states that “the right of the people to keep and bear Arms, shall not be infringed.”  These anti-gun control activists believe that creating stricter regulations regarding the ownership and acquisition of guns would do little to decrease crime rates and overall become ineffective. 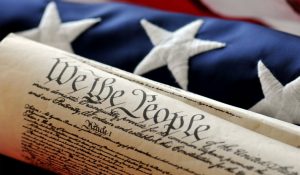 Many of these pro-gun supporters use John Locke’s protection of “life, liberty, and property” (Locke § 87) to preserve the current gun laws and Second Amendment. In order to understand Locke’s position on this issue, the entire statement must be looked at in its context. As it is clear Locke supports an individual’s right to self-preservation, this does not ultimately mean Locke would be against stricter gun control.

Locke’s understanding of the natural man is a rational individual who when trusted with their futures will act in a rational way. (Locke § 61) He believes that because of this, all men should be able to preserve their natural, inalienable rights even after entering into a civilized society. While individuals may leave the state of nature to enter into a government, they do not leave their rights behind with them. To the understanding of many individuals, this would mean that Locke supports the individual’s right to self-defense and to bear arms in order to do so.

This argument runs deeper as Locke continues to mention that although men may maintain their inalienable rights when consenting into a civilized society, this does not grant complete freedom. Rather, the government may still regulate an individual’s right to preserve oneself for the common good. (Locke § 131) With the current issue in mind, many Americans today would argue that gun control could ultimately result in saving individuals’ lives – a common good.

While Locke considers these rights to self-preservation and inalienable rights to be those of the natural, rational man, it is clear today that not all individuals are rational. Statistics have shown that of 235 mass killings, 22% of the culprits would be considered mentally ill. These numbers clearly reveal the ability of guns to get in the hands of those who are not rational individuals, something that Locke does not support or consider in his work.

It should also be recognized that even Locke’s “rational man” may not always be the rational man we know today. During his time, Locke failed to recognize indigenous people, such as the Native Americans who had previously occupied American land, as members of this group. Rather those who had not followed the same common-law of reason may be treated as beasts as seen as “noxious prey.” (Locke § 16) This idea suggests a change in who the natural man is and what he encompasses. Neglecting such a large part of the human race from the natural man fails to fully examine “the natural man” and how rational he may be.

After analyzing Locke’s social contract, it is evident his examination of society and man is not sufficient enough to support a man’s right to carry firearms, especially at the height it has reached today. While his own theory may believe all men are rational enough to carry these weapons, his attempt to exclude individuals from the group discredits its truth. While based on his theory Locke would support the right to bear arms, a practical analysis of his work would not hold that decision accountable.