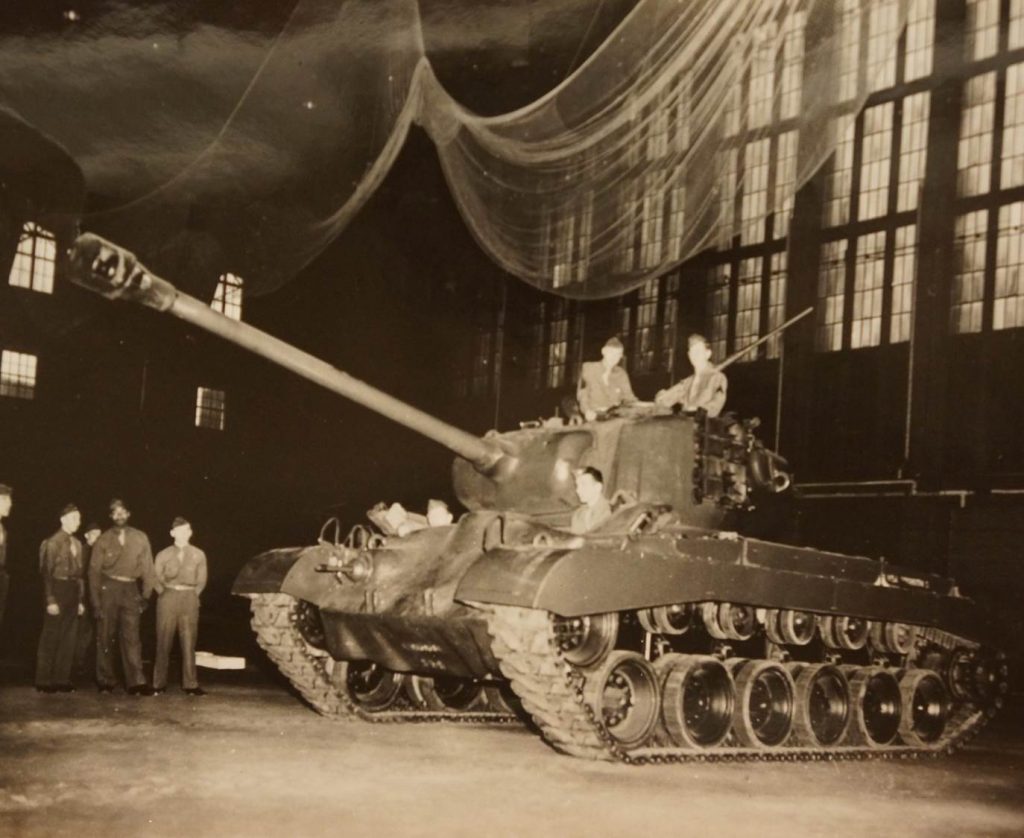 ROTC had its beginnings in the early 1800’s when civilian colleges began to offer military instruction to students. During the early stages of the Civil War, it became apparent that the United States Military Academy at West Point, New York was not capable of producing the quantity of loyal officers required to lead the massive and poorly trained volunteer forces fighting in this War. To fill the need for a ready pool of military leaders, Congress included a special provision of the Morrill Land Grant Act of 1862. The Act offered to each state tracts of federally controlled land, or money in lieu of land. States were to sell the land, invest the income, and create and maintain colleges with the proceeds. The colleges were to offer training in agriculture, mechanical arts, and military tactics. 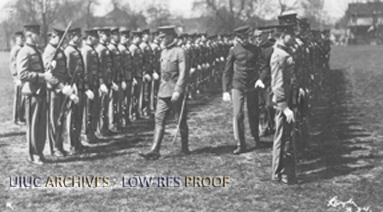 In 1916 with World War I raging in Europe, congress passed the National Defense Act, which created the Reserve Offers’ Training Corps (ROTC). This Act provided support for college military training and training camps. During the Korean and Vietnam conflicts, ROTC provided over 70% of the Army’s officer requirements. This illustrates the continuing critical role of ROTC in National Defense. In 1964, the ROTC Revitalization Act added flexibility and incentives to the program. This Act created the 2-year ROTC program, increased pay, and created new scholarships. This Act also changed ROTC from mandatory to optional training on campuses across the Nation. In 1973, women became eligible for enrollment in ROTC.

On the first day of classes, Spring Semester 1868, students at the Illinois Industrial University, currently named the University of Illinois, were formed into ranks before an instructor. These 75 young men, each of whom had to be at least 15 years of age, reported for roll call to the Military Department. The first campus dress code required all pupils to wear a gray uniform with blue cap. From this beginning, training in “Military Tactics” was to be an integral part of education at the University of Illinois. 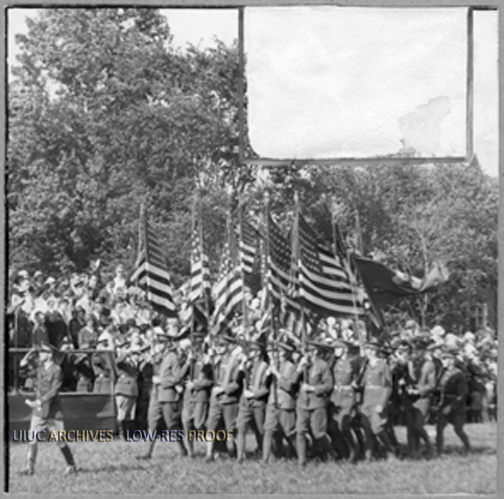 The second building constructed for the University was a drill hall and workshop in 1869. The present Armory building was built in 1914 with the last major renovation in 1926. The Armory building was constructed exclusively for military training: to house equipment, and provide offices, classrooms, and a drill floor. The original Armory floor was dirt and cinders. When construction was finished, on Nov. 1, 1914, the Armory was considered the largest structure in the world without a center support.

In 1919 ROTC, which had been created by the National Defense Act of 1916, began full operations on campus. All able-bodied males were required to take at least basic military training in ROTC. Originally, ROTC enrollment and training was branch specific. For example, the 1923 enrollment was 830 in Cavalry, 738 in Infantry, 236 in Air Service, 208 in Engineers, and 194 in Signal Corps. Cadets trained on campus with cannons, tanks, horses, pontoon bridges, and airplanes. Branch training in ROTC was discontinued in the mid-1960s. ROTC enrollment reached a peak of 4,772 Cadets in 1942.The University of Illinois established Naval ROTC in 1945 and Air Force ROTC in 1949. This made it one of the few Universities in the Nation with tri-service ROTC, which still holds true today. 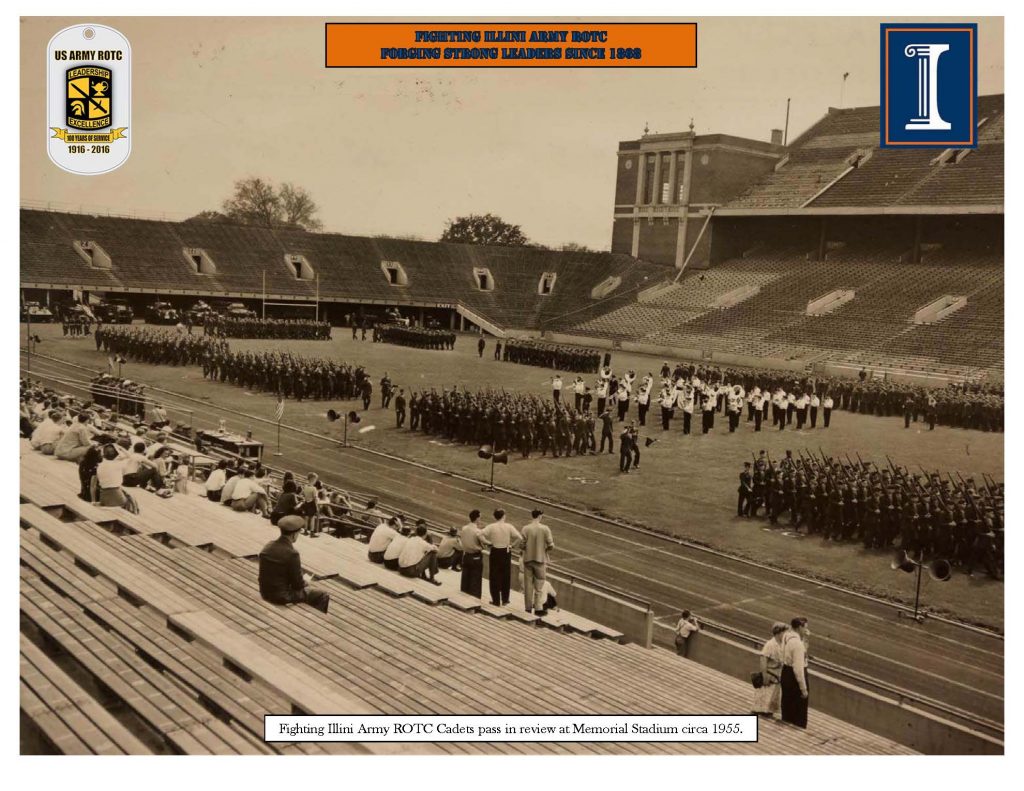 The switch to voluntary ROTC drastically affected enrollment in 1964 under the ROTC Revitalization Act. In 1963, enrollment fell to 3,100 Cadets. In 1964, enrollment plunged to 500 Cadets. As a result of public resentment over the Vietnam Conflict, enrollment dropped to only 69 Cadets in 1974. The 1980s saw a rebirth of national pride and patriotism and enrollment rose to 129 by 1988.

With the entrance of women into ROTC in 1973, the Fighting Illini Battalion had the distinct honor of commissioning the first woman through ROTC. Throughout its history, the University of Illinois has consistently trained high-quality leaders for duty in the US Armed Forces. Cadets can be proud of being a part of the distinguished heritage of the Fighting Illini Battalion. 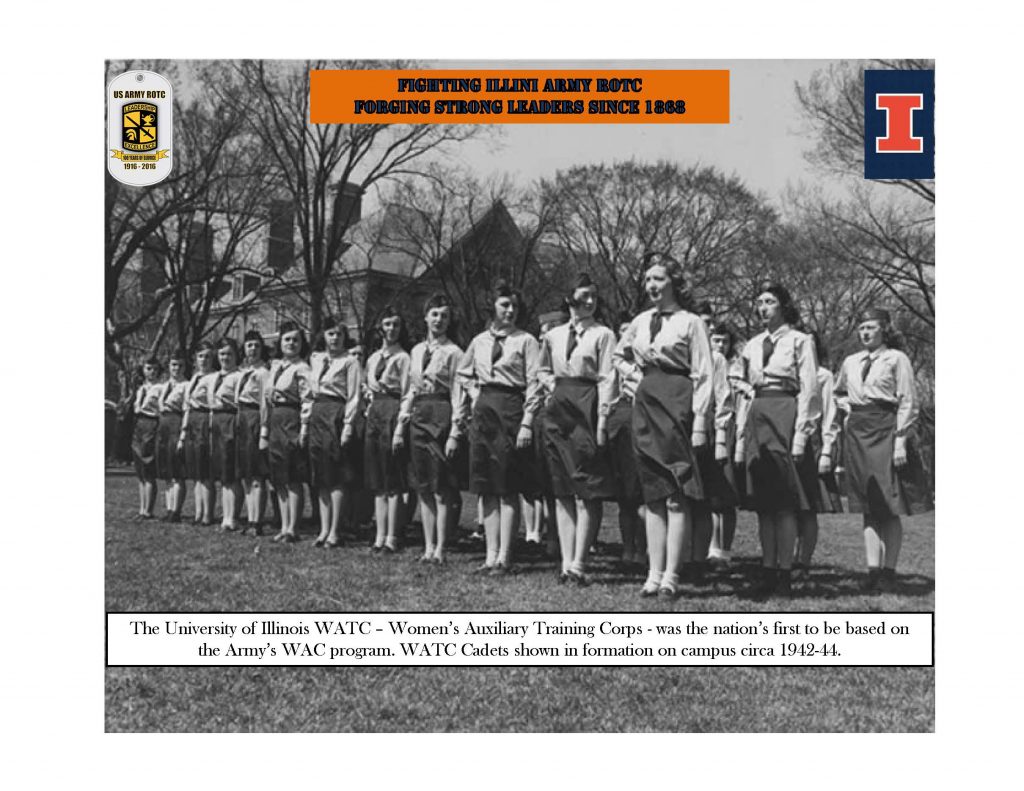 Today, former cadets continue to forge history across the globe in places like India, Israel, Iraq, and Afghanistan. Just a fraction of the contributions to this nation are highlighted in the Battalion’s Hall of Fame. Stay on the net for updates from Alumni leaving a proud “Illini” footprint across the globe! 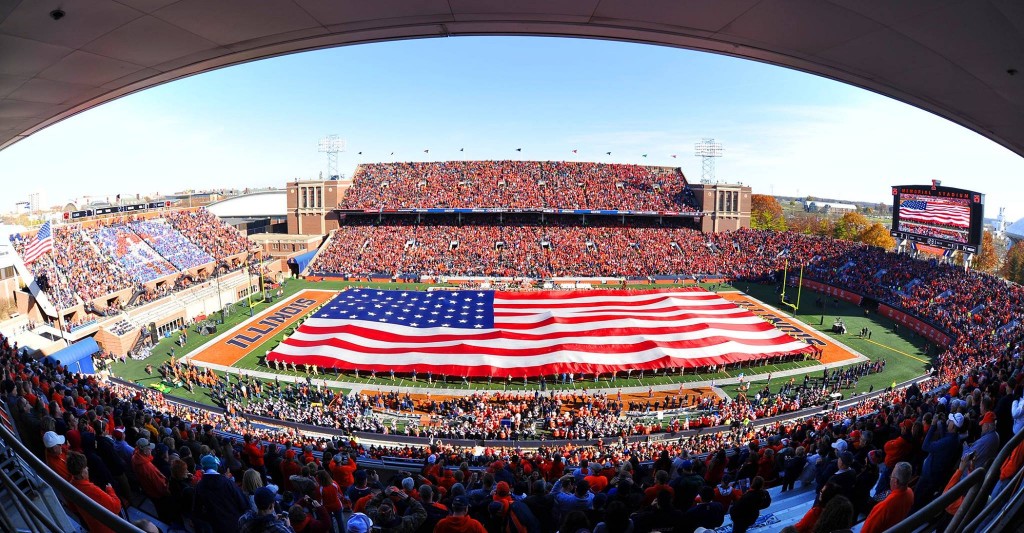 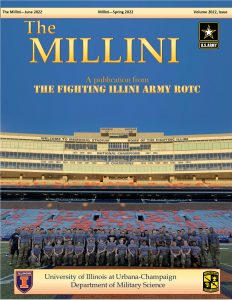 Recommended FIB Reading List from the cadre and cadets 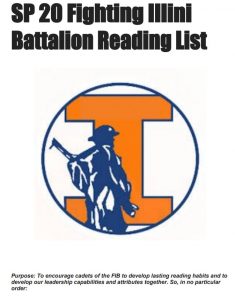 Forging Strong Leaders Since 1868… and into the 21st Century

Students share their experiences as half student, half ROTC candidates

Strong ties endure between Grainger Engineering and ROTC at Illinois

West Point of the West