The Great Lakes are the world’s largest freshwater system, and they provide recreational, cultural, economic, and ecological services to 95 million nearby residents. The region’s fisheries, beaches, shipping routes, and croplands provide enormous contributions to the economies of communities in the watershed. The $4 trillion attributed to the Great Lakes’ economy is, on its own, more than twice as large as Canada’s gross domestic product. 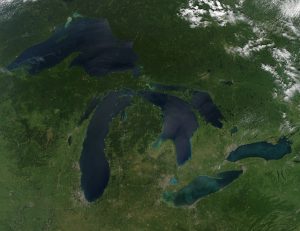 Although Great Lakes shorelines are distributed among eight U.S. States, this project focuses on those that border Lakes Michigan and Ontario. This area includes nearly 15 million Americans who reside in New York, Michigan, Indiana, Illinois, and Wisconsin.

Both lakes are hubs of culture and recreation, sites of scientific research, and areas of huge economic investment for both Canada and the United States. 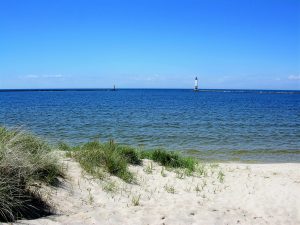 Stretching over three hundred miles from Michigan’s Upper Peninsula to the Illinois-Indiana border, Lake Michigan is the longest lake from north to south. Its shorelines are home to a sizable urban population, with Chicago, Illinois along the southern shoreline and Milwaukee, WI on the southwest coast—each the largest city in their respective states.

With Niagara Falls and the Toronto Metropolitan Area on its western shores, and 331 miles of its shoreline in New York State, it is not hard to see why Lake Ontario receives millions of visitors every year. The Lake and its tributaries are home to some of the best fisheries in North America.