Everyone has caught Founding Fathers fever with the overwhelming popularity of the musical Hamilton. Not only is it currently playing to sold out crowds on Broadway, and coming to Chicago this September, but it’s winning accolades left and right from the Pulitzer Prize for Drama to the Tony Award for Best Musical. The UGL can help you explore even more about the time and people from the smash musical. What’s our name? Undergraduate Library! 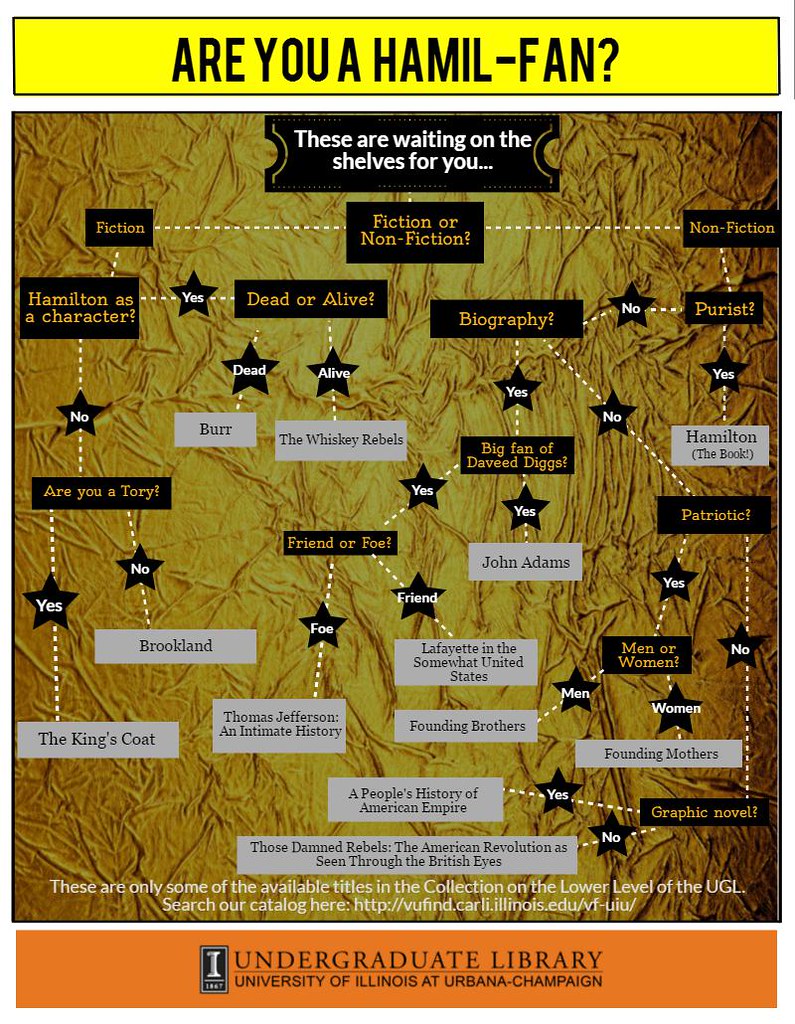 There’s a million books you haven’t read…just you wait!

What better place to start than the book that inspired the musical? Chernow, who also penned books about the Morgan family and John D Rockefeller, uses his skills as a historian to shed light on yet another figure central to American finance. Alexander Hamilton seeks not only to recast a monumentally misunderstood figure in American history, but to explore his relationship to the American Revolutionary War and the mythic figures who emerged from it. Come for the musical inspiration, stay for the amazing history lesson.

Much like Chernow’s book about Hamilton, David McCullough’s book about John Adams also inspired an adaptation–this time as an HBO miniseries. McCullough has written about many influential American historical figures. This 2002 biography of the second president won the Pulitzer Prize for Biography or Autobiography. McCullough not only examines the public and political life of Adams, but the personal and private as well. Read the book and then check out the miniseries starring Paul Giamatti, both available at the UGL!

Much has been said about the men who wrote the Federalist Papers, battled the British, or founded our nation, but the women in their lives have barely been mentioned. Just as Lin-Manuel Miranda shoves the Schuyler sisters out of relative public obscurity, journalist Cokie Roberts includes women in the sequel, and brings to light the influences that these mothers, sisters, and daughters had on the founding of our nation. Roberts includes Abigail Adams, Mercy Otis Warren, Deborah Read Franklin, Eliza Pinckney, Catherine Littlefield Green, Esther DeBerdt Reed, and Martha Washington, many of whom are never included in a school textbook, but have used their courage, pluck, sadness, joy, energy, grace, and sensitivity to manage their businesses, raise their children, provide their husbands with political advice, and WORK!

If you like heroes a little on the controversial side, try Burr by Gore Vidal! Vidal’s historical novel shows the Burr-Hamilton feud in a new light with Burr as our anti-hero of the story who reflects on his experience thirty years after Hamilton was killed. Burr will give you a new lens through which to view your favorite Hamilton characters.

Alexander Hamilton is only one of many stars of this historical fiction novel by David Liss. The Whiskey Rebels follows former Revolutionary spy as he serves Alexander Hamilton in the midst of the Jefferson-Hamilton rivalry over the national bank and a woman who distills whiskey in order to move west. As Hamilton’s circle closes in on whiskey and its profits, these two main characters each prepare for a patriotic fight.

This historical fiction novel set in New York during the revolution, steps away from the war and into the sights and smells of 18th century Brooklyn. After inheriting a gin distillery from her father, Prue makes a big promise to the residents of Brooklyn: she’s going to build a bridge from Brooklyn to Manhattan. Barton’s highly praised second novel places you in “the room where it happens” but in a completely different context.