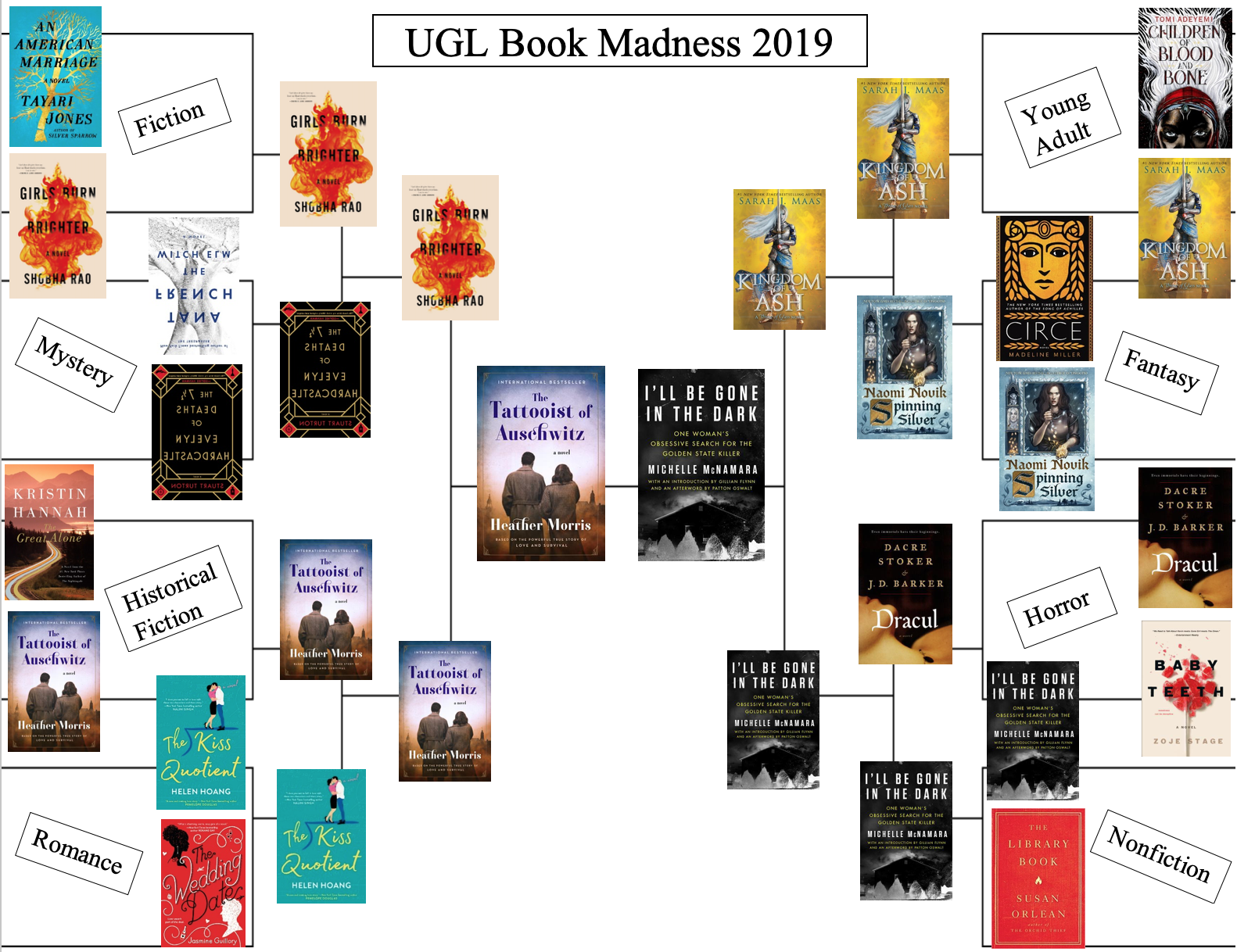 The Undergraduate Library has taken inspiration from March Madness, and in the spirit of the tournament we’ve created a 2018-2019 Book Madness bracket of some of our favorites published this year.

“Girls Burn Brighter” by Shobha Rao: This novel spans from India to America, following the stories of two girls as they struggle against the expectations and circumstances of their lives. This book is a testament to the love found in true friendship as the girls-turned-women sacrifice and fight to find their way back to one another again.

“The Witch Elm” by Tana French: Tana French is one of the most well known current authors in the mystery/crime genre. With “The Witch Elm”, French delivers yet another chilling mystery for her readers to solve after a skull is found buried in a suitcase on an old family estate.

“The Seven Deaths of Evelyn Hardcastle” by Stuart Turton: In this unique taste on a murder mystery, you are invited to a masquerade ball set at the country estate of the Hardcastle family. As guests arrive, one guest wakes up in a new body every day and must solve the murder of the daughter of the house, or be forced to live the same day over and over and over and…

“The Tattooist of Auschwitz” by Heather Morris: What makes this novel especially compelling is that it’s based on the true story of the man who served as the tattooist of Auschwitz death camp for years during the Holocaust. While it is certainly a story about struggle and pain, the main message is one of love and human bravery.

“The Kiss Quotient” by Helen Hoang: In this refreshing love story, successful business woman Stella Lane hires an escort to teach her all the ins and outs of dating. You see, Stella has Asperger’s and her business algorithms make more sense to her than french kissing. Can Stella let go of her no-nonsense logic long enough to learn about love?

“The Wedding Date” by Jasmine Guillory: Can you imagine agreeing to be a guy’s wedding date after getting stuck in an elevator together? That’s what happens in this fun and flirty debut novel where a fake date just may turn into something more.

“Kingdom of Ash” by Sarah Maas: Sarah Maas’s “Throne of Glass” series has inspired and captivated readers with its epic fantasy setting and cast of beloved characters. “Kingdom of Ash” is the seventh installment full of faeries, witches, magic, and featuring a harrowing battle against an ancient evil.

“Children of Blood and Bone” by Tomi Adeyemi: In this new series by a debut author magic, danger, and revenge tangle together as one girl goes on an epic journey to avenge her people.

“Circe” by Madeline Miller: You don’t need to be familiar with the original myth to enjoy this feminist retelling of the ancient Greek sorceress Circe. Miller breathes new life into a tragic character from Greek mythology by allowing Circe to take control of her own story and perhaps even change her destiny.

“Spinning SIlver” by Naomi Novik: In “Spinning Silver,” Naomi Novik has captured the essence of Eastern European folklore while taking inspiration from the tale of Rumpelstiltskin. In this retelling, three brave young women discover love and friendship as they battle forces out of their control with help from a little magic.

“Dracul” by J.D. Barker: “Dracul” is the first in a new series, fashioned to be the prequel of “Dracula.” This new series was inspired by notes and texts written by Bram Stoker himself, and features the author as a protagonist in the story.

“Baby Teeth” by Zoje Stage: This is a novel about a family gone wrong. Hannah loves Daddy, but Mommy stands in her way and she wants to be rid of her for good. Suzette struggles with her daughter and fears that something may be seriously wrong with her little girl, though her husband seems blind to the problems and the tricks their little girl plays.

“I’ll Be Gone in the Dark” by Michelle McNamara: This incredible true crime account was published after the death of Michelle McNamara, a true crime journalist and detective who was determined to find and unmask the serial killer she called the Golden State Killer. Merely two months after its publication, police were able to finally make an arrest in the case after nearly thirty years.

“The Library Book” by Susan Orlean: “The Library Book” is one journalist’s investigation into the Los Angeles Public Library fire which occurred in 1986. The fire destroyed over 400,000 books and damaged 700,000 more. This is a story of libraries and librarians, and of what libraries and books can mean to the greater communities around them.

As the semester winds down, the intensity always ramps up. Don’t worry, the UGL has you covered. On Reading Day, Thursday December 13th, we have programming to help curb your stress with our semesterly De-Stress Fest! Choose your own adventure by looking at the categories of programming we have below. For a concise hourly schedule, see the image at the bottom, but be sure you stick around for 8:00p.m.…because you never know what Uggles has up her sleeves—er, paws. 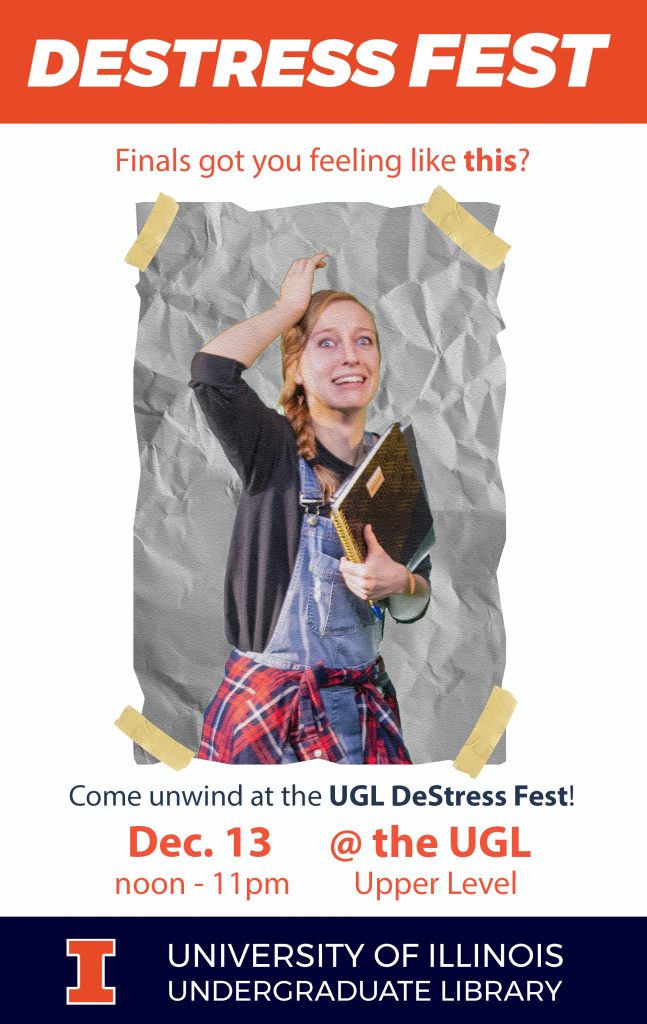 The Writers Workshop will also host several activities throughout the day in the UGL lobby for you word-nerds and grammar geeks (don’t worry, everyone at the library is one too!)

Need to take a break?

The graduate assistants hear you and we want to get crafty! Come procraftinate with us all day long from 12:00p.m. to 4:00p.m. and 5:00p.m. to 8:00p.m. in the new books section of the UGL. We will have coloring pages, pet rock painting, and button making.  If you don’t have time to craft, pick up a de-stress bag full of word puzzles and brain teasers that you can use to take a break between flash cards, math problems, or book chapters!

Come to room 289 to participate in a variety of board games, party games, and an Illini trivia session. If you can pin the tail on Uggles or beat a team of friends/strangers at trivia, you can win a small piece of sugary motivation. (Candy, the motivation is candy.) You can also play one of the board games out of the UGL board game collection!

If you’re into video games, we have that too. From 8:00p.m. to 10:00p.m. in the gaming center, come test your gamer skills on vintage games with classics like Mario Kart, Dr. Mario-Tetris, Street Fighter, and more!

Need to vent or manage your stress?

The Integrative Health and Wellness Team will be in the UGL front lobby from 12:00p.m. to 2:00p.m. and the McKinley Stress Management Peers will have stress balls available for free from 2:00p.m. to 4:00p.m.

Want to escape the real world for a while?

We hear you, and we have just the people to help! Several members of the Pathfinder Society who know how to play the popular Dungeons & Dragons Pathfinder game will be around to answer your Pathfinder related questions from 4:00p.m. to 5:00p.m. in the UGL front lobby. Then you have a chance to use your new knowledge to play a beginners scenario in UGL Group Room 11 from 6:00p.m. to 8:00p.m.

See our full schedule below! 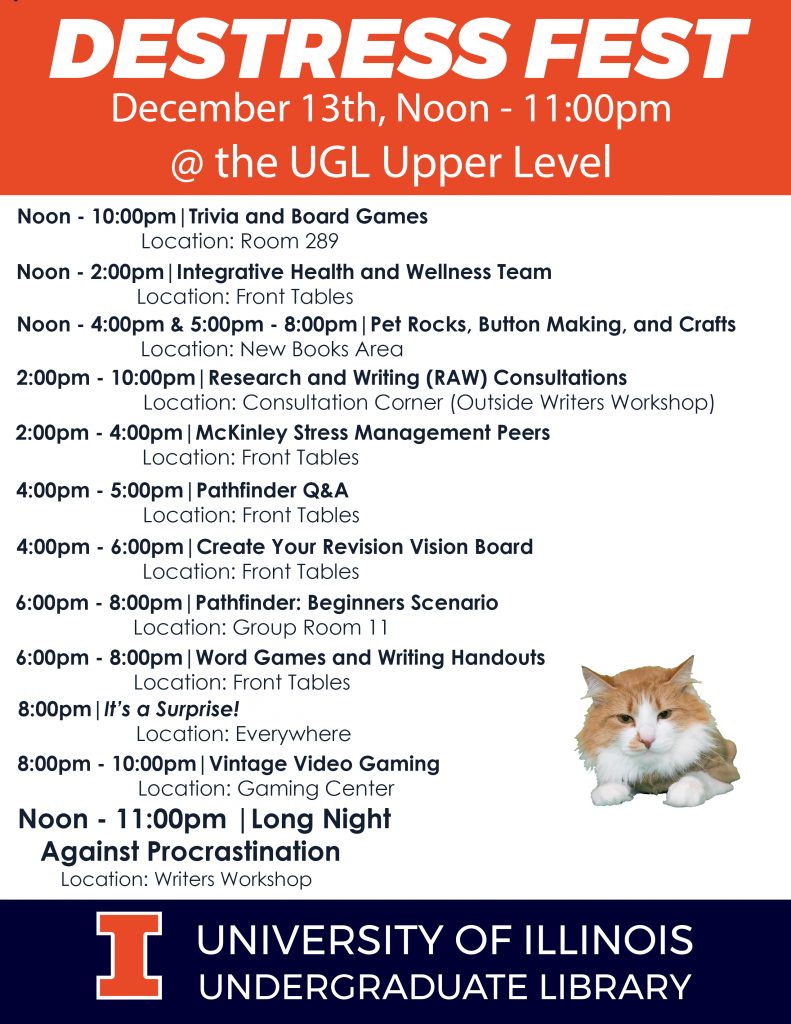 The Schedule of events