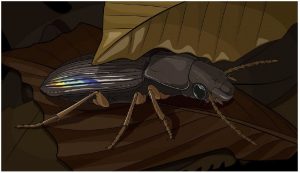 Insects did it first! Inspired by beetle iridescence and a scientist who has studied them (Ainsley Seago), the ABC Lab, the INHS Insect Collection, and the Materials Tribology Lab teamed up to study the multifunctionality of insect cuticle. Back down the evolutionary tree of beetles, some species developed iridescent cuticle, and others did not. This […]