Iterative Learning Control (ILC) is a method by which specific signals are learned through repeated iterations.  ILC examines the error from previous trials and maps it to the input signals in the current trial.  ILC exploits the trajectory repetition to compensate for any unmodeled dynamics, non-linearities and repeated disturbances. At a glance the repeatability requirement may appear restrictive. However, for manufacturing systems, which by definition perform repeated action, ILC is particularly appealing. ILC stores the error signal,  and the input signal,  from the current iteration in system memory and then uses it later to it modify the control input for the next iteration, . 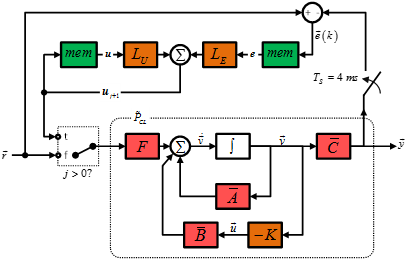 Figure 1. Basic Schematic of ILC
In our research work, we utilize the feedforward nature of the ILC approach to improve the longitudinal web handling capabilities, i.e. coordinated positioning and web tension maintaining, of a Roll to Roll (R2R) fabrication system. Fabrication of functional devices such as solar cells, micro-batteries, and biosensors are typically performed in multistep batch to batch processes. In a R2R environment, the multistep processes are localized into multiple zones in the system; each of which performs a particular process such as printing/imprinting, coating, annealing, curing, and etc. Due to process rate variations, there are often mismatches in the various transfer rates of different zones. This necessitates a hybrid fabrication approach where continuous motion is interspersed with stepping, or start/stop motion. Whether continuous or stepping, it is imperative that the web positioning and tension is strictly controlled for process yield purposes. By applying ILC on top of the feedback controller, we achieve a much superior tracking performance as depicted in Fig.2. The blue line in Fig.2. is the tracking performance of the feedback controller and the red line shows the tracking performance after 10 learning iterations . 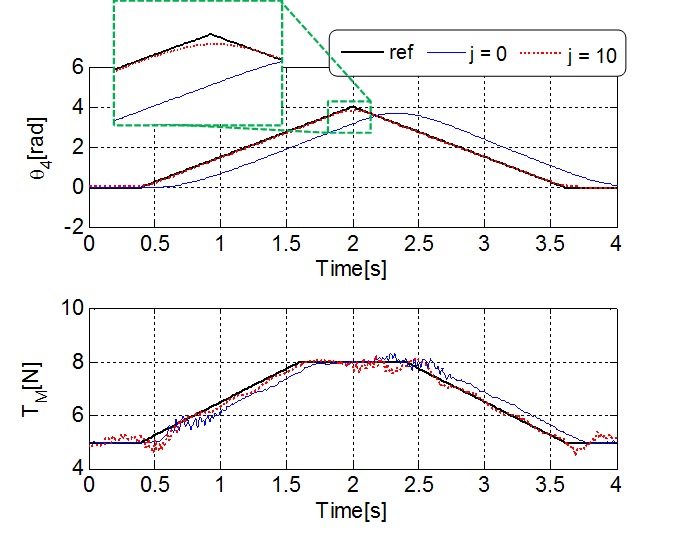