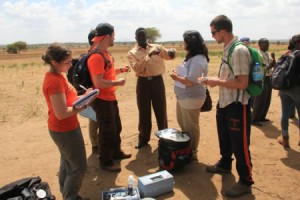 The goal of the SGWI in partnership with the local government, universities, non-governmental organizations, and private investors is to generate capacity building and relevant high quality research that enables access to sustainable safe water and sanitation technologies for the target populations.

Our approach considers four iterative phases to achieve this goal: identifying the nature of the needs at a nuanced level, designing solutions to address these needs, deploying technologies to implement these solutions, and finally designing enterprise models to incentivize individuals, communities and organizations to implement and sustain such solutions. Furthermore, the SGWI aims to implement these solutions in a sustainable way that is also scalable to other rural and urban communities in subsistence contexts.

The Awuor Pan is located in the Bondo district in the Atili sub-location. The pan is the primary water source in the area; the perimeter measures 46 ×27 m, and the pan depth changes depending on the season. When the pan gets full during the rainy season the water generally lasts 1.5 months in the subsequent dry seasons. This intermittent availability of water is a major concern in the community that would prefer to count on a more reliable clean drinking water source. Livestock has free access to the pan and this situation represents a high risk of water contamination by animal waste and enteric waterborne pathogens that are transmitted via fecal-oral route.

The Majengo Pan serves approximately 4,000 people from 5 surrounding villages. Only half of the construction is completed resulting in water loss during rain events. This water source is about 47 m in diameter. Community members of the surrounding area had dug a small ditch near the pond in an effort to capture excess water flow in rain events. The water coming from the Majengo Pan has been reported to cause gastrointestinal illnesses among the population that use it as their drinking water source. Monthly water education seminars have been organized in the area, however many people still do not treat the water before drinking it.

People at Ngurdoto use three primary sources of water; a spring, a stream, and a tap that is currently funded by the government. The most widely-used water source in the village is the spring which fills a 7 m deep well-like pit at the base of a hill. This spring has been in use since the 1970s. Community members collect water in plastic containers that are manually filled with a smaller vessel and carried to their homes. The water collected is used for a variety of household purposes including drinking, washing, and cooking. People do not usually treat the water before drinking it. The stream is located on the opposite side of the village and is sourced from Mt. Meru. Approximately 300 people depend entirely on this stream as their main water source. This stream has received a reputation for its very high levels of fluoride. Livestock have free access to the stream; animal feces uphill of the stream represent a threatening source of pathogenic contamination. Water from the tap is free but limited during the dry season; many people in the community do not consider the tap water to be clean and prefer to use water from the spring or the stream if those sources are closer to their home.

The Makiba community is currently using a distribution system that operates groundwater pumped through a well. The well that supplies the groundwater is estimated to be 54 m deep, and was built by a colonial farmer in 1952 for irrigation purposes. Currently, the water source is used for drinking and domestic purposes. The community has a storage tank for the water withdrawn from the well with a capacity of about 25,000 L. This source supplies water to the population living in a radius of 4-5 km surrounding the well. Community members need to pay 25 Tanzanian Shillings [TZS] (0.02 USD) for 20 L of water from the storage tank. The community is being affected by waterborne illnesses such as diarrhea and typhoid. Additionally the high level of fluoride in the water is causing dental fluorosis and skeletal fluorosis (in the elderly) in the population. Sanitation facilities are scarce and most of the ones available consist of unimproved pit latrines that are not properly maintained. The most common water treatment method in the community is boiling; however, firewood is scarce and becoming prohibitively expensive. This situation leaves the population who cannot afford firewood without access to any protection against waterborne illnesses.

The Makiba Primary School has 10 professors (6 male and 4 female) for 856 students from the ages of 1 to 7 years old. While school is free, each family is expected to make a contribution of 3,000 Tanzanian Shillings [TZS] (1.85 USD) a year in order to maintain the facilities and infrastructure. Currently, the primary school has a 20 m deep well with a hand crack mechanism supplied with a rope and a 20 L bucket to withdraw water for the students and faculty. This well serves as the main water source for households near the primary school. The school does not treat the water that students consume due to the high cost associated with firewood required for boiling or chlorine used for disinfection. Each day, students are expected to provide two pieces of firewood. Collecting of this firewood is challenging for the students as this resource is becoming less available in the area. Firewood is consumed primarily in the cooking of porridge for lunch that is provided only for first year students. Several students do not have the means to regularly eat at home and thus the school porridge is their main meal. The primary school currently has non-ventilated pit latrines for the students, however, no soap or facilities for hand washing are available. Adequate maintenance of the pit latrines is also a problem.

SGWI/WaterCAMPWS researchers are developing new robust materials to better control pathogens in water treatment systems. These new materials use light emitted in the UV-visible range for water disinfection and are effective against many chlorine resistant pathogens. This approach will advance on better controlling waterborne threats and reducing toxic disinfection by-products formation.

The Tigray region is the northernmost of nine ethnic regions located in Ethiopia; it is composed of 35 districts. Wukro is a town that lies in the district with the same name in eastern Tigray. Wukro has a gravity-fed distribution system that obtains water from two reservoirs filled from four deep wells; this system serves about 106,250 people. However, beyond the limits of the distribution system, shallow wells are the main source of drinking water, and rivers are used as secondary water sources. These alternative sources provide water to communities that range from 300 to a 1,000 people that need to walk up to 1 hour to get water. Microbial contamination has been reported to be the main cause of illnesses in the region and such contamination seems to be primarily the result of the handling and transporting process between the water sources and each individual household. The lack of safe water combined with poor sanitation practices originates recurrent transmission of waterborne diseases among these communities of Wukro.

San Miguel Huautla has approximately 295 households, and a population of 1,200. Even though there is a distribution system, the majority of the community lacks access to it. Shortage of water is a distress among the population; however, respiratory illness was reported as the biggest concern according to the staff of the local clinic. Many people have inefficient stoves and are constantly breathing smoke from burning wood when they cook and boil their water. Boiling water is the main water treatment approach implemented. Santa Catarina Adequez is a community containing about 1,000 people. During the rainy season, Santa Catarina Adequez receives heavy precipitation, which has led to catastrophic erosion and the degradation of streams. The community currently receives their water through a distribution system with a supply on a three-day rotation for different sections of the town each day. Many people leave their drinking water in uncovered jugs and tanks. Unhygienic water storage, inadequate water handling and poor sanitation practices originate the transmission of waterborne diseases among the population of both towns.

The state of Yucatan is located in Southeast Mexico and is considered the main state within the Yucatan Peninsula region. Cenotes are sinkholes linked to groundwater that constitutes the largest source of water to the local inhabitants. Yaxunah is a small indigenous Mayan community approximately 20 miles away from Chichen Itza; the main archeological site in the area. Yaxunah consists of approximately 143 households. Chimay is located about 3 miles away from Yaxunah and has approximately 25 households. Most people in both communities have access to the public water supply; however, the current distribution systems are unreliable and the water provided is affected by the lack of sanitation facilities. The cenotes that serve as main sources of water for both communities are open and exposed to contaminated water runoff. Animals, such as bats and birds, live in the cenotes and their feces pollute the water. In addition, the extremely permeable soil of the area favors the infiltration of contaminated water into the sources people use for drinking, cooking, washing and bathing. Access to health services is very limited as there is only one small clinic at Yaxunah that serves for both communities.