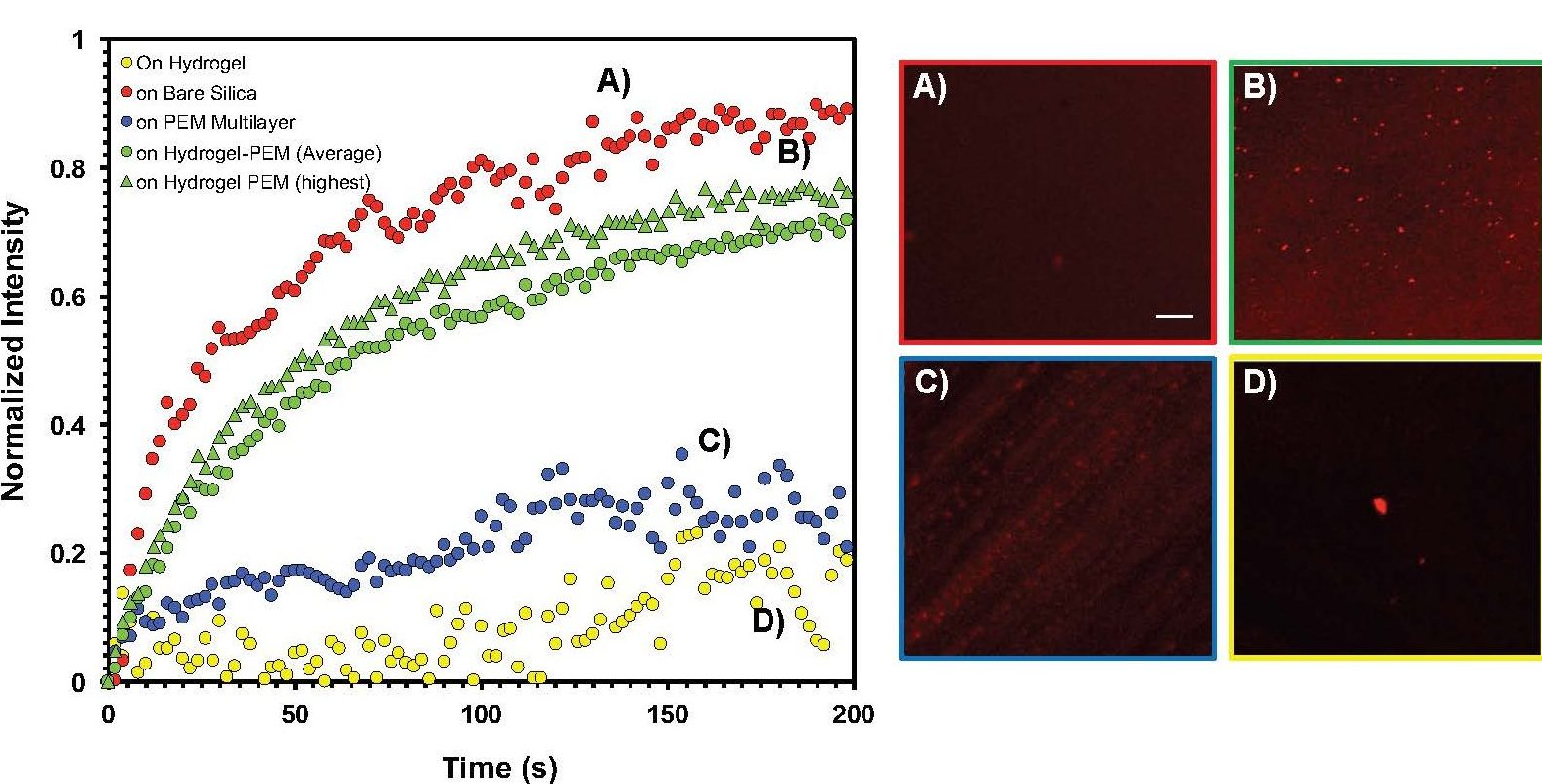 Figure 1: Normalized recovery fluorescence intensity vs. time for lipids on bare silica (A, red), PEM-coated hydrogels (B, green), PEM-coated silica (C, blue) and hydrogels (D, yellow) with corresponding bleach spots before photobleaching. The diffusivity of the lipids on the developed system is similar to that on solid-supported silica, the current model system for cell membranes.

Recognizing the limitations of solid-supported lipid bilayers to reproduce the behavior of cell membranes, including bendability, transmembrane protein inclusion and virus entry, this study describes a novel biomimetic system for cell membranes with the potential to overcome these and other limitations. The developed strategy utilizes a hydrogel with tunable mechanical behavior that resembles those of living cells as the soft support for the phospholipid bilayer, while a polyelectrolyte multilayer film serves as an intermediate layer to facilitate the self-assembly of the lipid bilayer on the soft cushion. Quartz Crystal Microbalance studies show that, upon coming into contact with the polyelectrolyte film, vesicles fuse and rupture to yield a robust lipid bilayer. Fluorescence recovery after photobleaching confirms the formation of a membrane (Figure 1), while Atomic Force Microscopy shows a low adhesion between the indenting probe and the bilayer. More importantly, in comparison to the solid-supported lipid bilayer, the response of this biomimetic system to nanoindentation demonstrates its increased mechanical stability and bendability when assembled on a soft cushion. Hence, the developed hydrogel-supported lipid bilayers can mimic biomechanical properties of cell membranes, which will enable to study and to understand biophysicochemical interactions between cell membranes and extracellular entities. Future studies will include the interactions between the biointerface and viruses, drug carriers and contaminants. 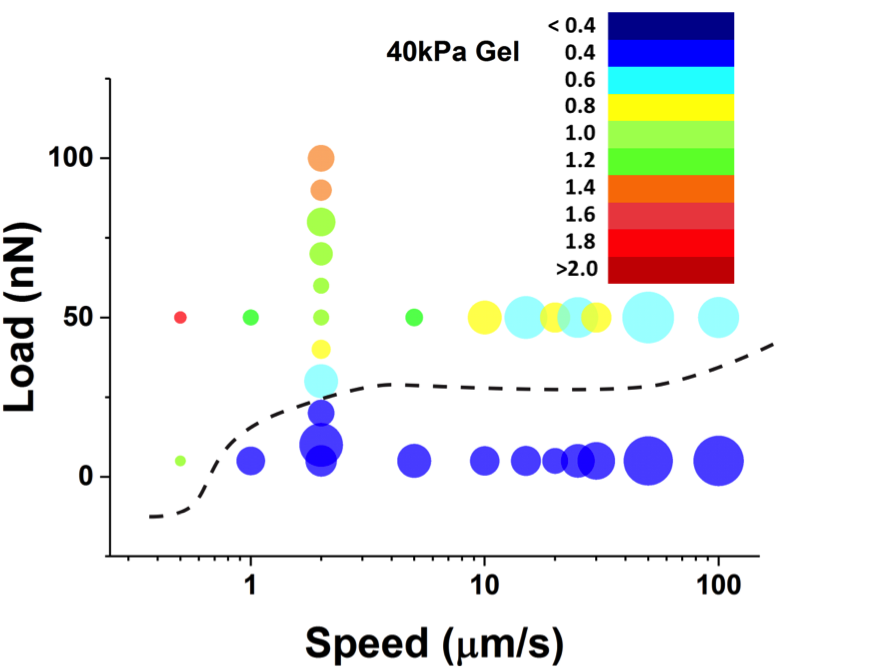 Figure 2: 2D bubble charts for the slips measured on 40kPa hydrogels. From blue to red colors (see legend in nN) correspond to small to high stress drops during a slip event. The size of the bubble represents the occurrence of slips at each condition.

Another aspect of this project concerns the study of damage of the cell membrane under applied normal and shear stress. Stick-slip is of vital importance in understanding articular cartilage damage, bacterial motion on biosurfaces, and shear stress induced deformation of biological cells. On rough hard substrates, rapid slips occur whenever an asperity on one surface slides over another asperity on the opposite surface, thereby leading to intermittent relative motion of the surfaces. Although soft interfaces are rough because thermal fluctuations are inherently present in soft materials, the large deformation imposed by the applied load, the long relaxation times of macromolecules and the presence of a solvent in the film lead to intrinsically different energy dissipation mechanisms that need to be taken into account to predict and explain friction and (bio)lubrication mechanisms. In this context, we have measured the stick-slip frictional response of the hydrogel-supported lipid bilayers. With our colleague Joerg Heintz, at the Health Care Engineering Systems Center at UIUC, we are statistically analyzing the stick-slip response of  hydrogel-supported lipid bilayers and other soft films (Figure 2). Prof. Karin Dahmen from the Physics Department at UIUC will develop a stick-slip mean-field theory for these systems. 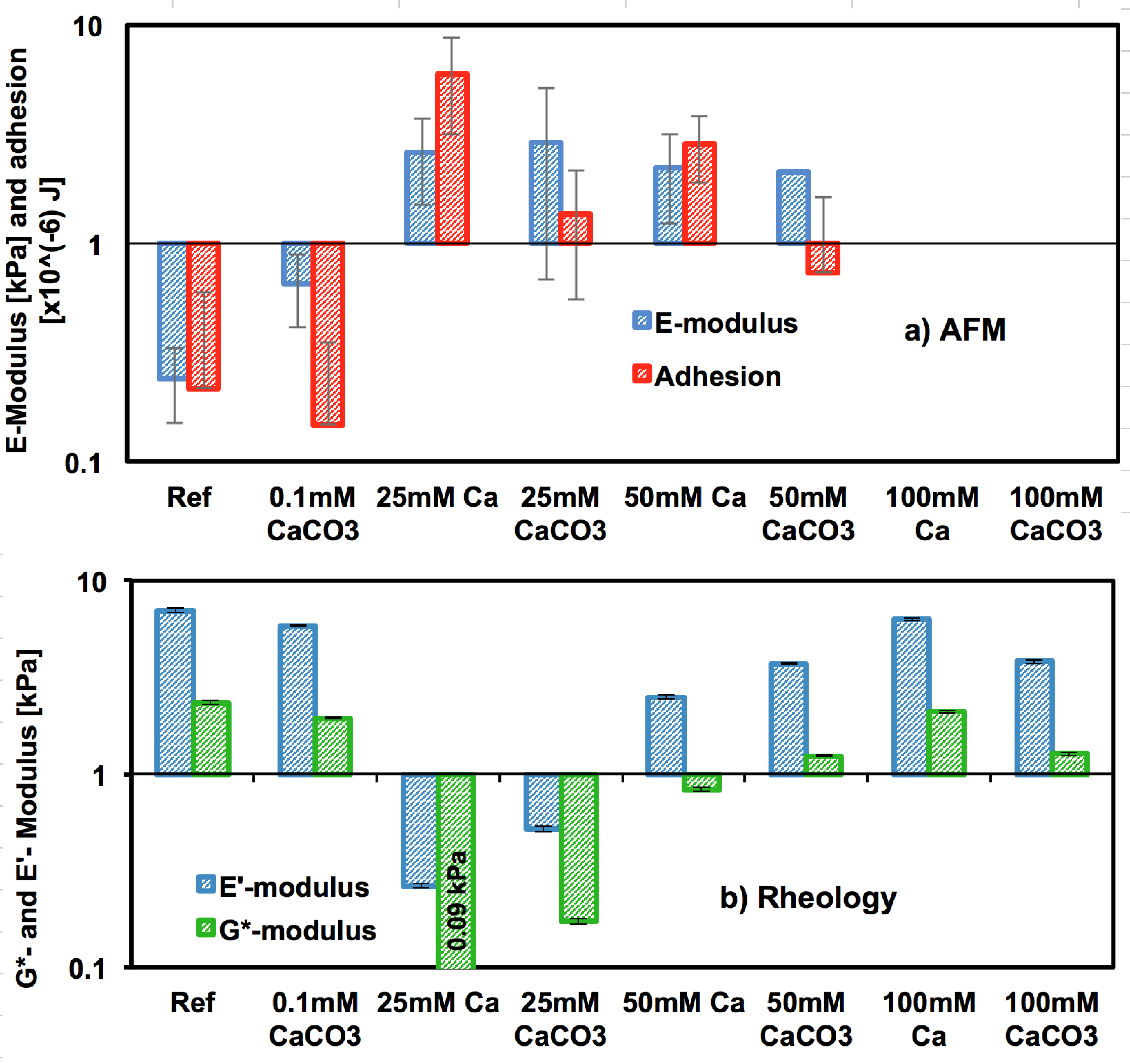 Figure 4: a) Young’s modulus and adhesion energy from AFM indentation for reference gels (DI water), Ca- and CaCO3-gels (far away from crystals to eliminate crystal substrate effects) obtained by fitting the Hertz model to the force-indentation curves. b) Complex shear modulus (G*) and elastic modulus (E’) obtained from frequency-sweep rheology for reference, Ca-, and CaCO3- gels. 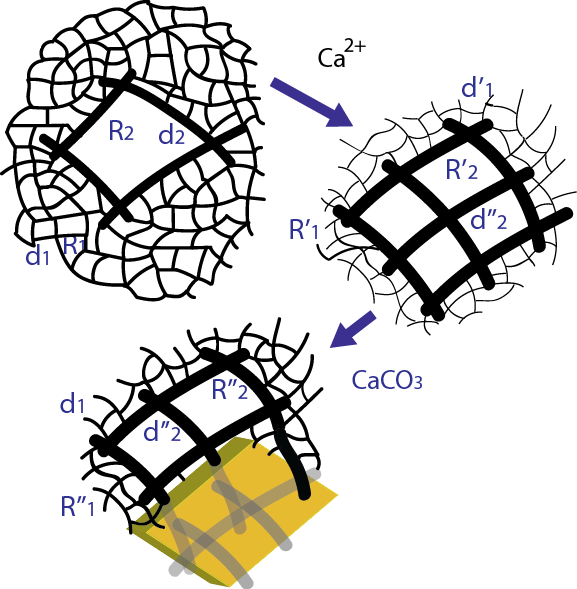 Mineralized biological tissues, whose behavior can range from rigid to compliant, are an essential component of vertebrates and invertebrates. While biomineralization has been intensively investigated in recent years, experiments mainly focus on hard biominerals and little is known about how the behavior of mineralized yet compliant tissues can be tuned by the degree of mineralization (Figure 3). This paper addresses this issue and compares the viscoelasticity of unmineralized and mineralized  hydrogels as a function of composition. Post-mineralization, a balance between the stiffening effect of the solid phase and the engulfing of agarose chains by the growing crystal causes the viscoelastic behavior to remain essentially unchanged, thereby implying a self-adaptation of the hydrogel to mineralization (Figure 4). Surprisingly, mineralization can lead to a more compliant hydrogel response under certain conditions. This work not only provides a route to design biologically inspired soft composites, but also helps to understand the change of properties that biomineralization can cause to biological tissues, organisms and biofilms.