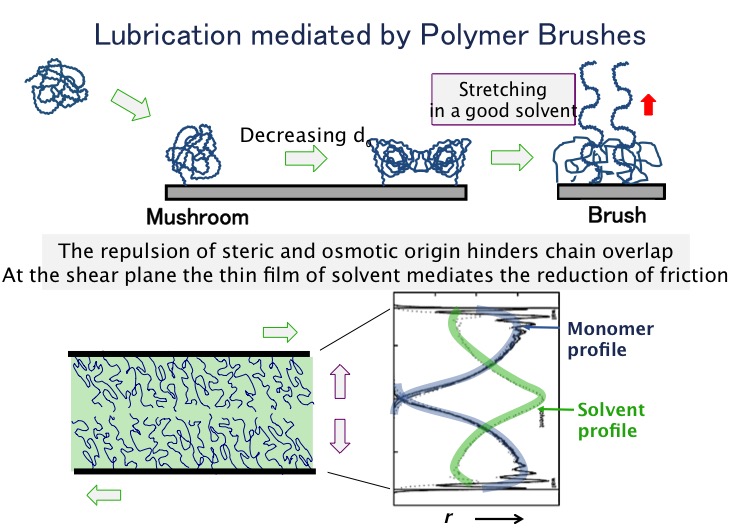 Ever since their discovery a century ago, ionic liquids (ILs) have been reckoned as promising alternatives to traditional molecular solvents, for their thermal and electrochemical stabilities and chemical versatilities. In spite of extensive research on the properties and applications of ILs, there is a niche for the synergy of IL-polymer systems, especially at the solid-liquid interfaces. Polymers at the solid-liquid interface are of profound scientific importance and can be a leverage to design novel nano-devices (Figure 1). In our lab, we examine the interface of a prototype system composed of a comb-like copolymer, and a well-studied IL, in an attempt to unveil the inter-molecular correlations between organic macromolecules and ILs, and the effects of a charged solid surface. Specifically, we wish to understand the adsorption conditions of polymers in ILs, and the polymer architectures in ILs. Further, we investigate the system’s response to external perturbations, such as compressing and sheering stresses, ionic strengths, and temperature, which is critical to developing smart nano-devices. 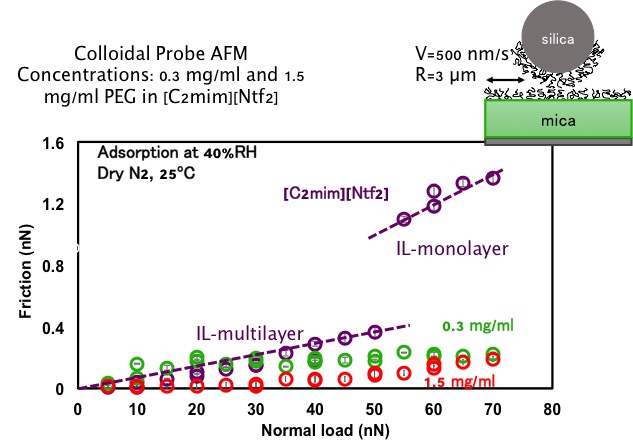 Figure 2: Friction vs. normal load for an ionic liquid [C2mim][Ntf2] vs. PEG brushes in this IL.

Experimentally, an extended surface force apparatus (e-SFA) is adopted to measure the repulsion induced by compressing two symmetric polymer layers, generating direct force measurements in the normal direction to the interfaces. By fitting with theoretical models, we probe the conformation of the polymer chains in the normal direction, as well as their response to normal compressions. On the other hand, atomic force microscopy (AFM) is used to directly image the surface topographies. Sheering force is applied on the polymer-IL interface via a sliding silica sphere (coated with the polymer), and the friction force is measured by lateral force microscopy (LFM). Additionally, various spectroscopic techniques, such as FTIR, NMR, and XPS have been coupled with the direct force measurements, to rigorously elucidate on the proposed molecular models. The results show that PEG brushes solvated by ILs are better lubricants than the neat IL (Figure 2).