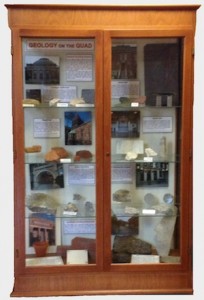 The display case is located at the south end of the west foyer on the first floor.

In the summer of 2014, the Department of Geology moved out of its traditional home in the Natural History Building so that renovations could proceed. Geology classes now meet in Davenport Hall. Meanwhile, the museum exhibits from the NHB hallways (some of them more than half a century old!) were updated and enhanced with more rocks, minerals, and fossils and replacement labels.

On this site, you may study one entirely new display that showcases some of the building stones used around the Main Quad. Photos used here and in the actual display case in Davenport were selected from the collections at the Virtual Campus Tour (a part of the UIHistories project), plus other sources as noted.

The overall structural theme for buildings throughout the UIUC campus is brick with limestone trim. In addition, most of the Quad buildings, as well as many other of the older ones, have slate roofs.

Geological details of rocks used for construction are illustrated in the display case and this website. The location map linked above shows places where stones like the one on campus have been quarried and where raw materials such as clay and lime may be found.

Many of the materials used around the campus, both visible and hidden from view, have been manufactured. People have been making bricks since civilization began – formed by hand or machine and dried either in the sun or in a kiln. Pottery and ceramics were invented later.

Concrete and cement, used for pavement and for structural components of buildings, date back to the Roman Empire. In the streets you may see asphalt, which today is often applied to resurface concrete pavements.

Image selection and text by Eileen A. Herrstrom 2014