By Joel Hood and Abby Sugar, Supply Chain Management students at the University of Illinois at Urbana-Champaign 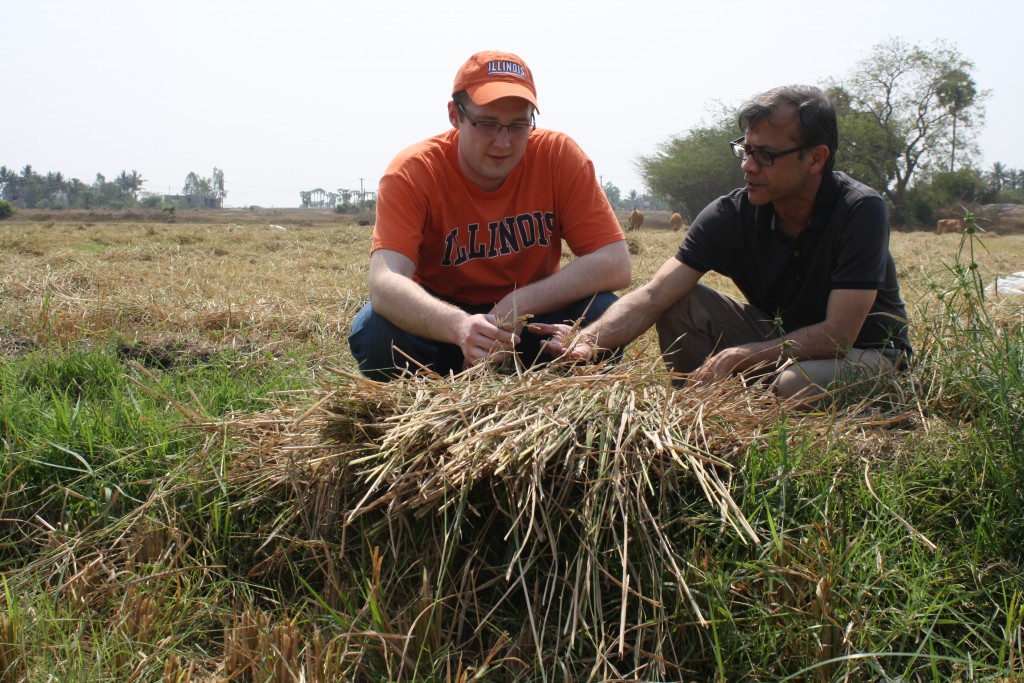 On a small farm in Chennai, Professor Palekar shows Joel Hood how paddy can be left in the field when poor harvesting equipment is used. Credit: ADMI/K.Wozniak

Today, the SCM group had the opportunity to interview farmers from northern India. Although this was our first interaction with northern farms, the differences in farm size, water availability, crop type, middlemen, and risk factors were apparent. The farm size in the north was drastically bigger than those in the south. Two of the farmers we spoke to had farms of 75 acres and 70 acres, as opposed to the 1 to 2-acre farms in the south. This difference in size led to much higher yields for individual farmers as well as more workers per farm. In addition to the size of the farms, the access to water resources was plentiful in northern India. Earlier blog posts comment on the insufficient water supply in in the south, but the interviews with the northern farmers indicated that many farms are completely irrigated with plenty of access to water. One of the questions posed was “have you ever had a problem with the water supply?” The response was that the only time they lacked water was when the generator powering the pump was stolen. Water access is vital because paddy, which is one of the most common crops in the north, requires much more water than other crops. The other crops grown include wheat and sugar cane, and many farmers growing vegetables for their families. 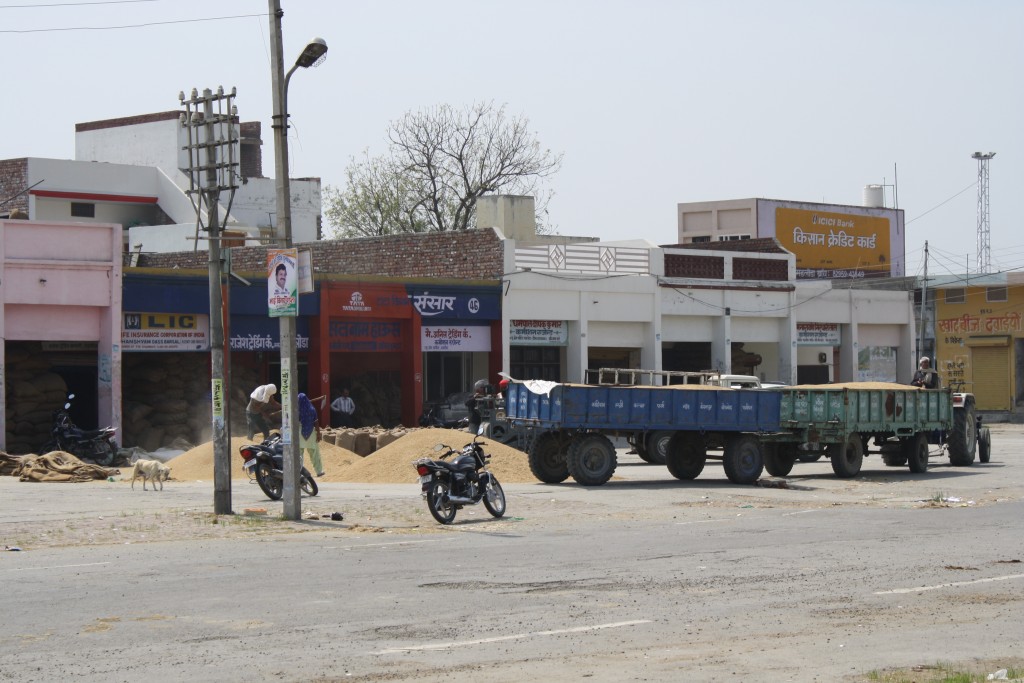 Rice grain at a wholesale market in Panipat, Haryana, where students learned about farming practices in the northern India. Credit: ADMI/K.Wozniak

Another distinction was that the commissioners we interviewed did not store the crops for very long because of the risk of financial and physical loss. Each farmer indicated that rats, disease, and thieves were large contributors to their paddy postharvest losses. Another large cause of loss for farmers was inconveniently-timed rains before harvest, as the crop would rot in the field. Similarly, the only way to dry crops is by natural sunlight, so the rains affect pre- and postharvest loss conditions. One of the
men that we spoke to was a commissioner and a farmer. He decided to become a commissioner because he realized that the farming only took 4 months out of the year. One downside to this diversification strategy is that the exporters take the grain that he buys from the farmers, but don’t send payments to the farmers for 2 years. This forces commissioners to front the money from their own crops to provide loans and inputs for their own crops. Exporters use leverage over the farmers to solve their own cash flow problems.

Today was a great display of the contrast between northern and southern farms.  The individuals that we spoke to highlighted the various factors that that play a role in the agricultural supply chain in northern India.

Joel and Abby were participants in the 2015 Supply Chain Management India study abroad trip organized by the program director in the College of Business at the University of Illinois at Urbana-Champaign, Professor Udatta Palekar. Throughout the 10-day trip, students observe how agricultural products in India move through supply chains from farm to consumer with a special focus on postharvest losses.

Commissioner Commentary: Discovering the Roles of the Middleman
Other Localized Supply Chains: Observations from an Auto Plant Tour