Things Are Heating Up in India: Day 2

By: Shannon Dolehide and Ashley McInerney, Juniors in Supply Chain Management, University of Illinois at Urbana-Champaign

The following post was written by students on an ADM Institute-sponsored observation study tour through India – March 22, 2015.

When we signed up for the 2015 Agricultural Supply Chains in India study tour, we knew it would be hot, but we were unprepared for the 95-degree smoldering heat of the paddy (rice) fields in a rural village outside Chennai. We spent our second day in south India learning about paddy harvesting and the challenges farmers face. 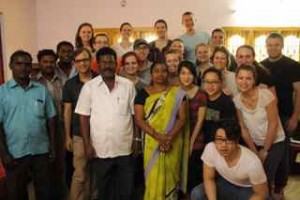 After a two-hour long bus ride and a pit stop to meet a nice temple elephant named Kamakshi, we finally made it to the village, Kadambur. We started with an interview of three village officials: the village president, the village administrative officer, and the assistant agricultural officer. We learned the duties of each official and about the village in general. The village is 210 families, or about 755 people, with an area of just 5 kilometers. Most farmers grow rice, peanuts, and sugarcane. After that, we interviewed five farmers of various ages and with farm size ranging from three to eight acres.

Most of the conversation centered on the problems that farmers have been facing, especially a limited water supply. Over the past two years, the monsoons have not provided as much water as they used to. Wells in the village used to be steadily filled with water, but the water table has dropped, leaving most wells dry. It is too costly for most farmers to dig deeper wells to reach the water.

The lack of water has caused farmers to shift from growing traditional crops to vegetables and the more-risky watermelon. Additionally, farmers have stopped utilizing all of their land – for example, one gentleman only uses one acre of his eight-acre land to plant crops. 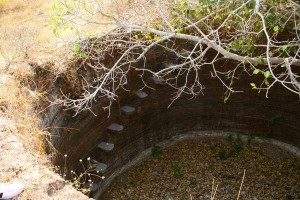 A dried-up well in south India shows how serious concerns are about water for farmers in Kadambur, a village near Chennai, India. Credit: ADMI/K.Wozniak

The consequences demonstrate the growing concern of climate change in southern India. We noticed this while dripping sweat in the paddy fields. Besides our discomfort, the lack of water was evident in the dry, cracked ground.

We observed both harvesting and manual threshing in the paddy. We also saw a well that services the farm, and it was completely dry. After a quick game of cricket with some villagers, we visited a rice mill. The mill is the only one in Kadambur that is fully automated. It has been fully automated for two years and it produces roughly 130 bags of rice per hour. The machine takes the paddy, removes the husk from the rice, and cleans and polishes it.

At the end of this incredibly long day, we had gained a wealth of knowledge about rice harvesting and the issues that these rural farmers are facing on a daily basis. Though we spent most of our day submerged in farming culture, we are also incredibly grateful to have had the unique experiences of meeting a temple elephant and playing cricket. Day two of our trip, though extremely hot, was rewarding.

Read other blogs in this series:

Shannon and Ashley are participants in the 2015 Supply Chain Management India study abroad trip organized by the program director in the College of Business at the University of Illinois at Urbana-Champaign, Professor Udatta Palekar. Throughout the 10-day trip, students observe how agricultural products in India move through supply chains from farm to consumer with a special focus on postharvest losses.