by Steve Sonka, Research Professor, ADM Institute for the Prevention of Postharvest Loss at the University of Illinois at Urbana-Champaign

Recognition that reducing postharvest loss is an important opportunity to enhance global food security is not a new phenomenon.  Indeed, on September 1, 1975, then US Secretary of State Henry Kissinger made the following impassioned plea at the seventh special session of the UN General Assembly:

“Another priority in the poorest countries must be to reduce the tragic waste of losses after harvest from inadequate storage, transportation and pest control.”

Kissinger’s plea had impact and on September 19, 1975, it was adopted as a resolution of the UN General Assembly, drawing global attention to the issue of postharvest loss.

Despite this significant pronouncement, postharvest loss and food waste remain at high levels.  Over the last year, we’ve analyzed efforts to reduce postharvest loss in numerous global settings, primarily in developing countries.  One important result of this work focuses on the comparison in the title above – causes versus symptoms.  Indeed, a consistent relationship we’ve identified is that successful interventions address the complexity inherent in agricultural and food systems.  Rather than supposing that one action can fix the problem, such initiatives employ a multi-faceted set of responses. 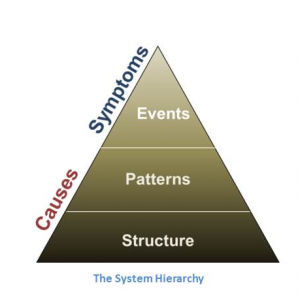 From the perspective of external observers, incidence of postharvest loss can be readily apparent.  Smashed tomatoes transported in bulk, rather than in appropriate containers, can’t be sold at market rates.  Rice spread on the ground to allow for sun drying is subject to consumption and spoilage by birds and other pests.  Maize that is not dried properly prior to storage goes out of condition.

Observing such conditions, a natural response is to focus on fixing the “problem” – use better containers, don’t dry rice in the open, and employ effective conditioning practices.  However, from a decision perspective, it often is important to realize that what we observe as the problem (an event) actually may be a symptom of more systematic factors.  The underlying patterns and structure often systematically drive unacceptably high levels of loss.

To illustrate, let’s consider a highly visible postharvest loss event in one of the most productive and progressive agricultural sectors in the world – the soybean sector in the state of Mato Grosso, Brazil.  The increase in soybean production in this state over the last five decades has been truly amazing.  In the late 1970s, the annual soybean production in Mato Grosso was less than 500 metric tons.  Phenomenally, production there had increased 50-fold by the year 2013/14 [1].

As a visitor to Mato Grosso, one has to be impressed with the scale and sophistication of its soybean system.  Large (sometimes immense) fields with uniform stands of weed-free soybeans stretch to the horizon.  The prototypical harvest picture shows several modern, large-scale combines marching in unison across a soybean field which extends across the picture frame. 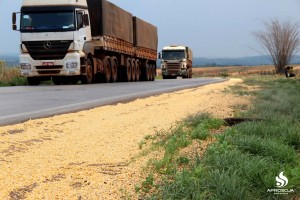 Soybeans fallen along the road during transportation in Brazil. Credit: Aprosoja

Yet there is another characteristic scene associated with soybean harvest there.  The main roads tend to be lined with soybean seeds that have fallen from trucks during transport.  As shown in the accompanying photo, soybean loss is readily apparent as the harvest progresses.

While the event – soybeans that fell from trucks – is highly visible, the underlying causes that contribute to the existence of this problem are less apparent.  To appreciate some of these causes, it’s useful to consider the sector’s development experience.

In the early years of soybean production in Mato Grosso, soybeans were produced as a single crop per year.  Planting occurred in September/October and harvest tended to coincide with the Easter Holiday each year.  Over time, however, soybean diseases developed which threatened to severely reduce yields.  Responding to these challenges, soybean breeders developed less susceptible, shorter season varieties.  The production season shifted with early harvest starting around Christmas and the bulk of harvest occurring in January and February.

With the shorter season, Mato Grosso farmers discovered that a second crop could be produced each year, typically maize.  A key to the success of the second crop is that planting must be accomplished prior to the end of the region’s rainy season which often extends only to early March.  Therefore there is considerable pressure to rapidly move the soybean crop to market. This new pattern contributes to behaviors which encourage transport losses.

A second characteristic of the structure of Mato Grosso farming is the lack of on-farm storage, at least relative to the soybean farming in the Midwestern United States.  Especially given that there are long transport distances to reach international markets from Mato Grosso, a structure with more local storage would provide a means to reduce harvest time pressures and associated postharvest losses.  However, until very recently, capital and financing for fixed storage facilities were limited. 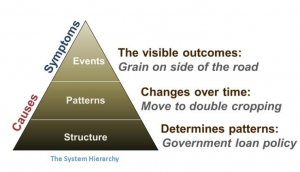 In the case of Mato Grosso, the event – grain on side of the road – is driven by the causes – the move to double cropping and lack of adequate financing.  Generally, the causes which drive postharvest loss events typically are embedded in the underlying system.  The immediate fix to the symptom may be a palliative, but addressing the systematic causes can prevent losses from reoccurring.

To know more about what we have learned through this project (which is supported by the Rockefeller Foundation), we invite you to watch the keynote video we recorded for a side event on “Reducing Post Harvest Loss and Food Waste” at the Alliance for a Green Revolution Forum 2014.

This blog post is part of series that highlights outcomes and learnings of the Global Learning Assessment project. This is the first post in this series.

Animating extension: How Illinois researchers are using modern ICTs to impact society
Things Are Heating Up in India: Day 2

8 Responses to Mitigating Postharvest Loss: Addressing Causes Rather than Symptoms