Innovation in Measurement: Perspective and Practice

Growing up on an Iowa dairy farm, I was introduced to the need to measure, even if informally, at an early age.  In those days, we had to carry the (hopefully full) bucket of milk from the cow to the can where we collected the milk.  Doing that, it was fairly easy to know which cows produced the most.  And because there were less than 20 cows in dad’s herd, it also was possible to make sure the high producers got an extra scoop of grain at feeding time.

Later I learned that management gurus such as Peter Drucker and W. Edwards Deming had popularized the concept, “You Can’t Manage What You Don’t Measure!” as an essential precept of management.  This phrase is equally relevant to decision makers evaluating national food policy, smallholder farmers, or managers throughout the food chain. 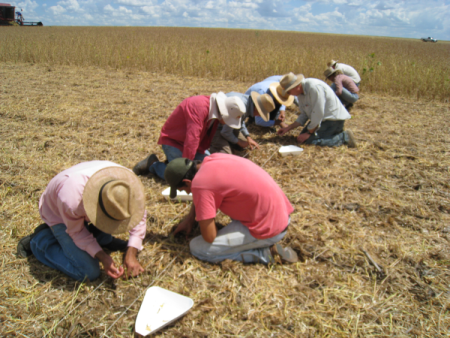 For those of us focused on prevention of postharvest loss, the lack of decision relevant data is an on-going frustration.  In this note, I’d like to highlight a number of emerging technologies which offer the promise to reduce this data impediment.  Taking advantage of such innovations, however, will require us to adjust some of our perspectives regarding measurement.

Back in the Iowa dairy barn, linking each cow’s milk production to the amount of feed they received was doable but imprecise.  More precise measurement options were available.  However, the economics of measurement (the cost of measuring versus the benefits of doing so) inhibited my dad and other farmers from using all technology available.  Currently, the knowledge and technology to precisely measure postharvest loss similarly are available.  Yet, the measurement benefit/cost ratio hasn’t justified widespread collection of relevant data.

Innovation in measurement, which could lead to more effective prevention of postharvest loss, requires capitalizing on new technologies, especially information communications technology (ICT). The mobile phone is revolutionizing the field of international development with its ability to capture, share, and transfer information to users in even the most remote places on earth. It is estimated that there were 6.4 billion mobile phone users globally in 2012[1]. 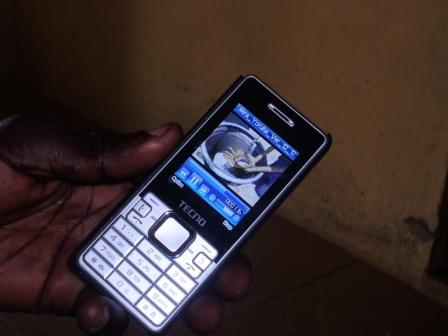 In addition to receiving voice and/or text messages, the use of cell phones as sensors is receiving intense interest in both the private and public sectors.  The prospect of relatively inexpensive devices that allow for measurement of temperature and other biologic conditions of stored grain is a near-term reality.

Further, the cell phone camera can capture images, which could document loss at harvest and at post-production stages of the food chain.  We need to consider that cell phone pictures also can be digital data.

Cell phones are one element of the “Internet of Things”, where relatively inexpensive sensors embedded in physical objects can continually report on their status.  In the Internet of Things, processes monitor and report their own activities and are sources of information.

Messages sent by cell phone users also can provide important information — that when aggregated can provide important and timely insights[2].  For example, a key factor indicating social well-being in developing countries is the food price index.  While extensive efforts are made to track food prices, official reporting processes take time to collect data and therefore often lag actual conditions, affecting low income consumers and social stability.  However, individuals “talk” about changes in food prices continually.  The two graphs in the figure below both track movements in food prices in Indonesia during 2010 and 2011.  The bottom graph provides the official monthly inflation rate for food prices.  The top graph tracks the volume of tweets in Indonesia, where the topic was the price of rice.  The similarity in direction and turning points of the two graphs provides support for the belief that important information can be acquired from social media sites. 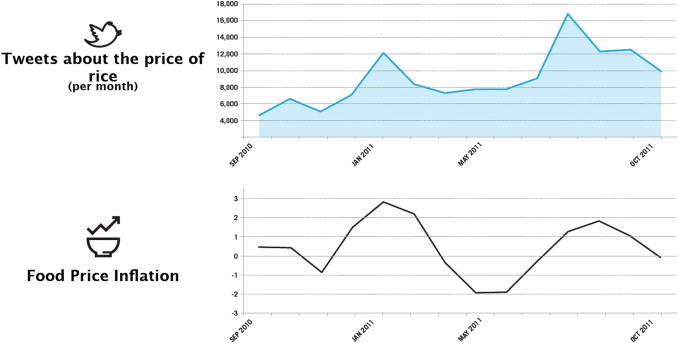 Tweets on price of rice in Indonesia during 2010 and 2011. Credits: UN Global Pulse and Crime Hexagon[3].

Today, ICT advances have materially altered our ability to capture, transmit, and store data.  Taking most effective advantage of these advances will require that we adjust our perspectives in a number of ways, which include: