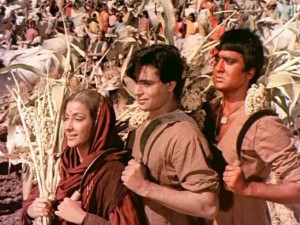 7.00 PM. 09.17.2013. KNIGHT AUDITORIUM, SPURLOCK MUSEUM
MOTHER INDIA is a 1957 Hindi epic melodrama film, directed by Mehboob Khan and starring Nargis, Sunil Dutt, Rajendra Kumar, and Raj Kumar. It is the story of a poverty-stricken village woman named Radha (Nargis) who, in the absence of her husband, struggles to raise her sons and survive against a money-lender amidst many troubles. Despite her hardship, she sets a goddess-like moral example of an ideal Indian woman. In the end she kills her son Birju, a criminal, for the greater good.1 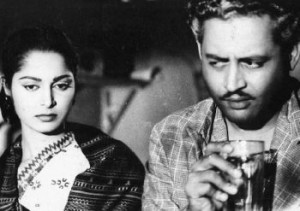 7.00 PM. 09.24.2013. KNIGHT AUDITORIUM, SPURLOCK MUSEUM
KAAGAZ KE PHOOL [Paper Flowers] is a 1959 Hindi film produced and directed by Guru Dutt, who also played the lead role in the film. The film was a box office disaster in its time but was later resurrected as a world cinema cult classic in the 1980s. The film’s music was composed by S. D. Burman and the lyrics were written by Kaifi Azmi, giving classic scores like “Waqt ne kiya kya haseen sitam”, sung by Geeta Dutt. In the 2002 Sight & Sound critics’ and directors’ poll, Kaagaz Ke Phool was ranked 160 among the greatest films of all time. The story revolves around a popular director who recruits a new actress to work for his movie. The popularity of the movie spills over to the already strained relationship between the director and his wife. Due to the emotional turmoils, the director’s career starts declining, while the actress starts gaining popularity and status in the film industry.2 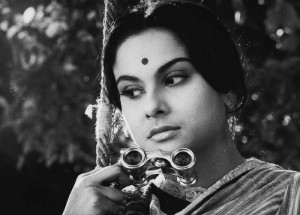 7.00 PM. 10.15.2013. KNIGHT AUDITORIUM, SPURLOCK MUSEUM
CHARULATA is a 1964 Indian Bengali drama film directed by Satyajit Ray. It is based upon the 1901 novella Nastanirh (The Broken Nest) by Rabindranath Tagore. It features Soumitra Chatterjee, Madhabi Mukherjee and Sailen Mukherjee.The film tells the story of a lonely housewife, known as Charu (Madhabi Mukherjee), who lives a wealthy, secluded and idle life in 1870’s Calcutta. Her husband, Bhupati (Sailen Mukherjee), runs a newspaper, The Sentinel, and spends more time at work than with his wife. However, he notices that Charu is lonely, and asks his cousin, Amal (Soumitra Chatterjee), to keep her company. Amal is a writer and is asked to help Charu with her own writing. However, after some time, Charu and Amal’s feelings for each other move beyond those of a mentoring relationship as Charu begins a latent sexual attraction towards Amal. Amal is unwilling to betray his cousin’s trust that has already suffered at the hands of Charu’s swindling brother, Umapada. He abruptly leaves, and after Charu hysterically submits to her disappointment in the presence of Bhupati, there is nothing left but for the forsaken woman and her humiliated husband to forge a contrived reconciliation.3

7.00 PM. 10.22.2013. KNIGHT AUDITORIUM, SPURLOCK MUSEUM
HUM DIL DE CHUKE SANAM (I Have Given My Heart, Darling) is a 1999 Bollywood romantic drama film directed by Sanjay Leela Bhansali. It was also released in English as Straight from the Heart. The film stars Salman Khan, Ajay Devgan, and Aishwarya Rai. The story is adopted from Maitreyi Devi’s Bengali novel Na Hanyate. It is a story of Nandini (Aishwarya Rai), daughter of Pundit Darbar (Vikram Gokhale) – a renowned musician. Sameer Rafilini (Salman Khan), from Italy, visits Darbar to learn music. During his stay, Sameer meets Nandini and both fall in love. But Darbar wants Nandini to wed Vanraj (Ajay Devgan), and forces Sameer to leave India. Nandini reluctantly marries Vanraj. Later, Vanraj when discovers that Nandini is in love with Sameer, he takes her to Italy to reunite the two. Nandini must now come to terms with living with Sameer in Italy, or alienating her family and her new groom. The music is composed by Ismail Darbar and lyrics by Mehboob. Ismail Durbar won the National Award for Best Music Direction in 2000.4 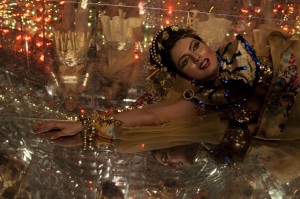 7.00 PM. 10.29.2013. KNIGHT AUDITORIUM, SPURLOCK MUSEUM
MISS LOVELY is a 2012 Hindi drama film directed by Ashim Ahluwalia. It follows the lives of people involved in the C-grade (horror and porn film) industry of Mumbai from the 1980s to 2000. It is a devastating story of two brothers who produce sleazy horror films in the mid-1980s. The film competed in the Un Certain Regard section at the 2012 Cannes Film Festival. The project was started as a documentary on the C-grade film industry which flourished until the proliferation of the online media. However during the research, the director discovered that none of the filmmakers were willing to speak on camera, thus the project was shelved, which was later developed as film script.5 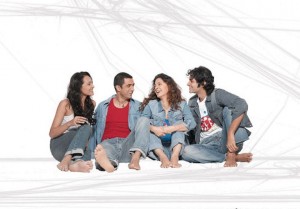 7.00 PM. 10.31.2013. KNIGHT AUDITORIUM, SPURLOCK MUSEUM
MY BROTHER… NIKHIL is a 2005 Indian film set in Goa. The movie portrays the life of the protagonist, Nikhil, from 1987 to 1994, when AIDS awareness in India was considerably low. Onir, the film director, stated that the film is based on true historical fact, and the standard disclaimer about fictitious content was just a compromise with the Indian government to gain permission to make the film. The film is a story of Nikhil Kapoor (Sanjay Suri) – a swimming champion. His father Navin Kapoor (Victor Banerjee) has raised his son to be a sports man, a dream that he never achieved for himself. His elder sister Anamika (Juhi Chawla) teaches in a primary school and loves him dearly. His mother Anita Rosario Kapoor (Lillete Dubey) adores him and from her he inherited his artistic side to his personality. After Nikhil is diagnosed with HIV, he is removed from the swimming team, his parents desert him and  he is also arrested because he is HIV positive. The only two people who stand by him are his sister Anamika and his friend Nigel (Purab Kohli). Despite facing threats from the community, Anamika and Nigel are able to secure his release with the help of a lawyer. Nikhil is unable to find a job at first, but then becomes a music teacher. Anamika and Nigel start an AIDS assistance organization called People Positive.6 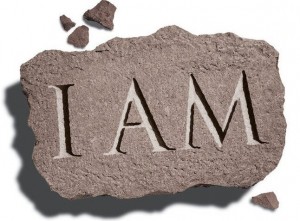 7.00 PM. 11.01.2013. KNIGHT AUDITORIUM, SPURLOCK MUSEUM
I AM is a 2011 Indian anthology film by Onir. It consists of four short films: “Omar”, “Afia”, “Abhimanyu”, and “Megha”. Each film shares the common theme of fear and each is also based on real life stories. The film was financed by donations from more than 400 different people around the world, many of whom donated through social networking sites like Facebook. There are four stories but the characters are interwoven with each story. Abhimanyu is based on child abuse, Omar on gay rights, Megha is about alienation of the Kashmiri Pandits and Afia deals with sperm donation. It was released with subtitles in all regions as six different languages are spoken in the film: Hindi, English, Kannada, Marathi, Bengali and Kashmiri. The songs are composed by Amit Trivedi, Rajiv Bhalla and Vivek Phillip. Lyrics are by Amitabh Verma and Amitabh Bhattachraya. In 2012, the movie won the National Award for Best Hindi Film and Best Lyrics.7 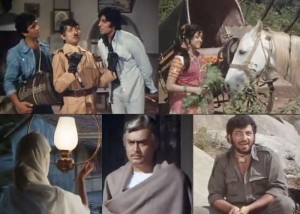 7.00 PM. 11.19.2013. KNIGHT AUDITORIUM, SPURLOCK MUSEUM
SHOLAY is a 1975 Hindi film by Ramesh Sippy. The film follows two criminals, Veeru and Jai (played by Dharmendra and Amitabh Bachchan), hired by a retired police officer (Sanjeev Kumar) to capture the ruthless dacoit Gabbar Singh (Amjad Khan). Hema Malini and Jaya Bhaduri also star, as Veeru and Jai’s love interests. Sholay is considered a classic and one of the best Indian films. The film drew heavily from the western cinematic conventions, and is a defining example of the masala genre. Scholars have noted several themes in the film, such as glorification of violence, conformation to feudal ethos, debate between social order and mobilized usurpers, homosocial bonding, and the film’s role as a national allegory. The film’s dialogues and certain characters became extremely popular, contributing to numerous cultural memes and becoming part of India’s daily vernacular. Certain scenes and dialogues from the film earned iconic status in India, such as “Kitne aadmi the” (How many men were there?), “Jo dar gaya, samjho mar gaya” (One who is scared is dead), and “Bahut yaarana laagta hai” (Looks like you two are very close) – all dialogues of Gabbar Singh. These and other popular dialogues entered the people’s daily vernacular. Characters and dialogues from the film continue to be referred to and parodied in popular culture. The lasting effect of Sholay on Indian cinema was summarized by Anupama Chopra, as “no longer just a film, [but] an event. To quote noted film-maker Shekhar Kapur, “Indian film history can be divided into Sholay BC and Sholay AD”.8 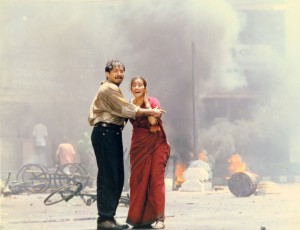 7.00 PM. 12.10.2013. KNIGHT AUDITORIUM, SPURLOCK MUSEUM
BOMBAY is a critically acclaimed 1995 Tamil film directed by Mani Ratnam, starring Arvind Swamy and Manisha Koirala, with music composed by A. R. Rahman. The film is located in the period of December 1992 to January 1993 in India, with special reference to the Babri Masjid controversy in Ayodhya. The demolition of the Masjid on 6 December 1992 increased religious tensions in Bombay (now Mumbai) that led to the Bombay Riots. It is the second in Ratnam’s trilogy of films that depict human relationships against a background of Indian politics, the others being Roja and Dil Se. The film’s soundtrack sold 15 million units, becoming one of the best-selling film soundtracks of all time, and earning composer A. R. Rahman his fourth consecutive Filmfare Best Music Director Award (Tamil). The film was ranked among the top 20 Indian films in the British Film Institute’s rankings.The film was also dubbed in Hindi and Telugu. However, the film caused considerable controversy upon release in India and abroad for its depiction of inter-religious relations and religious riots.9