I’ve taken Illinois students backpacking in Yellowstone four times, all in late June. There are still bear closures at those times, which rules out a number of sites I’d like to use. Most sites are limited to eight people, so I’ve needed two sites; once I used a site that allowed twelve. The goal, obviously, is to find two sites reasonably close together. Every backcountry office has told me that it’s OK for groups to eat together, though we must split up for sleeping.

My student groups have consisted mostly of backpacking novices. I’ve learned that it’s best to aim for distances around 2-5 miles, but that’s not always possible. Grebe Lake is at the low end of that range, the Gardiner sites at the higher end. Heart Lake sites would be great for groups but they are nine miles from the trailhead. The Snake River sites would also be great. Later in the season you can ford the Snake at the South Entrance; earlier in the season, you use an informal trail south of the park, across a bridge, and park on the east side of the river. That adds a couple of miles.

In addition to advice for backcountry groups, I thought I’d add reviews of other sites I’ve used. I’ve compared my impressions to Bill Schneider’s Hiking Yellowstone, which reviews every hiking site in the park. The park retires sites regularly, or restructures trails. Some of my reviews are updates to Schneider’s book.

One frustration in Yellowstone’s backcountry is that most official sites don’t follow the park rules. Ideally, your sleeping area, cooking area, and food storage area should each be 100 yards apart. You should sleep upwind of the cooking and food storage so that those food smells don’t lead a bear to your sleeping area. Not one of the sites reviewed here follows all of those rules.

1G3 and 1G4 provide a pair of sites that work well for a group. You can put two eight-person crews here, within an easy walk of one another. Unfortunately, neither of these sites have a view of Electric Peak, though they would make a good basecamp for a climb of Electric. 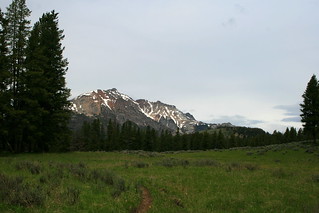 1G4. This site is close to the Gardiner River water source. This site is very open with a big fire circle that is great for a group. The campfire has very good views across the meadow and into the lower portions of the Gallatins. Even though this site is visible from the trail, I’d choose this one over 1G3 if I were backpacking by myself.

1G3. This is a more closed-in site. It is much more private than 1G3, located some distance off the trail. It does not have any real view from the cooking area or tent sites. It’s about a hundred yards to the river water source. 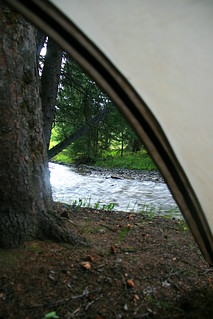 1G2. This site is also on the Gardiner River, but it’s on a different trail than 1G3 and 1G4. You can’t accommodate 16 people here. Schneider gives this site five stars, but I can’t figure out why. He likes it as a private site with a good view, tent sites, and water source. I certainly agree on the tent sites and water source, but there were no real views from the site. You could get some good views if you walk upslope a bit from the sites, which are in the woods by the river.

The nearby site 1G5 is for stock groups only, but it better fits Schneider’s review. It’s possible that he mixed up the two sites in his notes. For views similar to mine, see http://www.trailguidesyellowstone.com/yellowstone_hikes/fawn_pass_trail_east_yellowstone.php

There are three sites on the north side Grebe Lake that would work well for groups. We used 4G3 and 4G4, but 4G5 would also pair well with 4G4. 4G3 and 4G4 are a little farther apart than I’d like for a group, and the trail between them is indistinct. The lake was very buggy in late June, and the area mostly seems to attract anglers. All three sites had clear views of 4G2 on the other side of the lake, which was also occupied. This reduces the privacy.

4G3 parallels the trail. It has beautiful views of the lake but is not at all private. The tent site, bear pole, and eating area are spread out in a line and more separate from one another than is true at most Yellowstone backcountry sites. There’s a community of Uinta ground squirrels between the campsite and the lake. 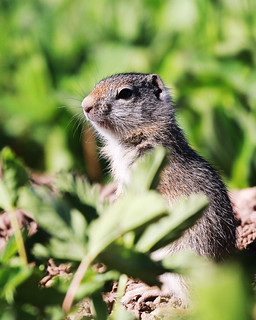 4G4 is a real winner, though the bear pole, eating area, and tent sites are closer together than they should be. The site is hidden in the woods but looks out over the lake.

8C1. I love the views from this site, which go up and down the Snake River Valley. The bear pole, eating area, and tent sites are lined up parallel to the trail, reasonably spaced out. Because we don’t make campfires, we ate away from camp on bluffs overlooking the river. You don’t have any privacy, and the trail attracts a fair number of horsepacking groups. 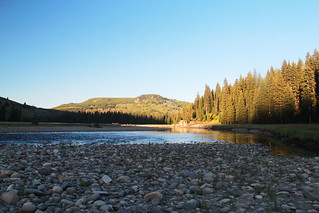 There are other sites within a reasonable distance that would make this work for a group. They’re a little farther apart than I’d like, though.

Thermal features flow into the Snake River at a couple points, creating legal (and safe) soaking areas. You should be aware of the risk of the Naegleri fowleri parasite, which is deadly.

8B1. This site has been moved since Schneider wrote his book, and the nearby trail junction has been restructured a bit so that the site is south of the junction and not north as the maps show.

Schneider calls it “semiprivate,” but it’s now a very private site. Because it’s new, it lacks a defined spur trail. If you’re coming from Snake River, look for the sign and walk uphill across the meadow. You’ll find the site in the woods. If you’re coming up the Basin Creek Cutoff Trail, turn left at the junction with Heart Lake, not right. (The NPS failed to tell us this; you might ask for details at the backcountry office.) 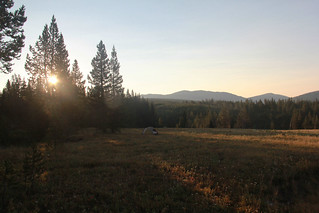 Inexplicably, the cooking area, bear pole, and best tent site are all on top of one another, so don’t use that tent site. It’s hard to find level sites in the woods, so we just found a hard site in the meadow. The meadow has quite a few bison wallows, and I wouldn’t use those! There are great views toward Overlook Mountain from that meadow, so enjoy.

There are five campsites on the west side of Heart Lake. 8H2 and 8H3 share a new spur trail, but are otherwise private. We could see 8H2 from our bear pole, but the campers there never showed any awareness of us. Both sites are on the lake and allow campfires. 8H2 has a composting pit toilet with no walls. It’s visible from the cooking area, which is another example of poor landscape design by the NPS. However, we never had any problems with smells. 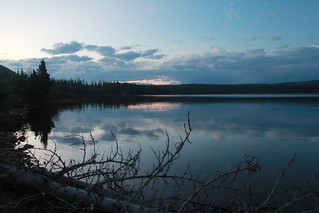 We only found one good tent site at 8H3. It has a good view of Mount Sheridan, but not of Heart Lake. However, there is a shoreline area along the lake where we watched sunrises, sunsets, and beavers.

All of the Heart Lake sites are great basecamps for a hike up Mount Sheridan. That’s a nine-mile round trip from 8H2 and 8H3, a little less from 8H4-8H5-8H6, and at least a mile more from 8H1.

5E4 Brimstone Bay is a lovely lakeside side with a beautiful view of Yellowstone Lake and Promontory Point, down an easy 0.2 mile spur from the trail.  It rightly earns five stars from Schneider. My only concern (August 2017) is that there are a lot of snags in and around the campsite – one fell down during our dinner on a perfectly calm day. We ran into a ranger later and raised the issue, so I hope the NPS can remove the safety hazards. Until then, place your tent well.

6B4 Beaverdam Meadow seems to have new routing, with about half the 0.4 mile spur trail essentially guesswork through a meadow.  That meadow seems popular with horse parties, and we saw a lot of horse, uh, sign there.  The food area and tent sites don’t have views.  The water source is easy but also lacking in views. We had requested, but didn’t get, the sister site at 5E1, which has views from a bluff (and is visible from the main trail).

6C2 River’s Edge is a beautiful site on a bluff above the Yellowstone River with a number of good tent sites.  It’s a bit challenging to get down the bluff to water. Unless you’re on horse, the mile-long spur trail entails some route finding to cross streams in the meadow and to reach the well-marked campsite.

6Y6 Three Mile Bend on the Yellowstone River has a beautiful view and a lot of mosquitoes. This was the only place we used our head net.  It’s easier to get down the bluff for water than it is at 6C2, but there is no flat space at the river’s edge – you’re balancing on slick mud. The spur trail required some bushwhacking through the willow, but the route finding is easy if you stay close to the river.  There was a lot of bear sign when we were there, and we met someone who had a grizz examine her bag at the food pole two days before.

We had lunch near 5E9 and 5E6, which are beautiful lakeside sites with great views.  5E8 seems similar but we didn’t see it directly. We had a reservation for 5E7 but decided to hike out instead as it’s a buggy site with a view of a meadow, facing away from the lake a few hundred yards away.

8S2. I didn’t stay here but walked through the middle of it, and talked to someone staying there. There’s a tent spot about 10-15 yards of the trail but the cooking area is right on the tail, with the lake on the other side of the trail. Pretty but not private.

8S3. This was empty when I walked through it, but is similar to 8S3 with perhaps a little more privacy.

8R5. This is a gorgeous site about a half-mile from the trail. The bear pole and cooking area are on a small bluff above the lake, or walk down to the shoreline for views of the Shoshone Geyser Basin and Shoshone Lake.  It’s down a good spur trail, about a half-mile from the trail. There’s a pit toilet (no walls) and abundant tent sites, all an appropriate distance from the cooking area and each other. The shoreline offers great sunrise and sunset views in September.

The University of Illinois News Bureau asked me to blog the 2016 version of PS 224.  Here are links to the three posts:

Between wilderness, tourism and civilization
A night in grizzly country
Tourists behaving badly