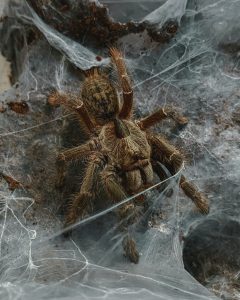 Our celebration of National Poetry Month continues on this penultimate Thursday of April. Today, we are proud to feature LitLang’s own Stuart Albert reading Reed Whittermore’s “The Tarantula.” Watch Albert read his selection here and read his reflections below:

“The Tarantula”, by Reed Whittemore, is a long-standing favorite of mine. As a dramatic monologue, it lends itself well to reading aloud. And… I don’t want to ruin the surprise with too much preamble… but I think many readers / listeners will find the narrator something of a kindred spirit.

After some cursory research, I’m inclined to think this poem inspired by the essay “The Spider and the Wasp”, by the much-cited authority Alexander Petrunkevitch, published in Scientific American magazine in August 1952. It’s always interesting to me, to see how often (and how far) the poetic imagination is launched by the tangible, the imminent, the seemingly dry and merely factual.

Incidentally, I held a tarantula once. Decent fella, name of Cecil.

P.S. I don’t know if lagniappes are allowed, but here’s another poem, by Howard Nemerov, that I think pairs well with “The Tarantula”. Like William, Oliver is someone I think many of us can identify with.