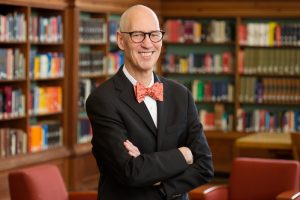 John Price Wilkin, Juanita J. and Robert E. Simpson Dean of Libraries and University Librarian at the University of Illinois at Urbana-Champaign, has been named the 2019 winner of the Hugh C. Atkinson Memorial Award. Wilkin will receive a cash award and citation during an ALCTS event at the ALA Annual Conference in Washington, DC.

“John Price Wilkin exemplifies the spirit of the Hugh C. Atkinson Memorial Award through leadership, risk taking, and innovation,” said Bruce Johnson, Hugh C. Atkinson Memorial Award Committee chair and former senior library information systems specialist at the Library of Congress. “John was an early adopter of structured markup languages such as SGML and XML in his work at the University of Michigan as head of the Humanities Text Initiative and head of digital library production service, providing access to digital texts as well as a means for searchability and textual analysis. This work later inspired online publishing efforts at other institutions, including the California Digital Library.”

“John led the Mellon-funded Making of America project, and early groundbreaking effort to digitize 19th-century books, and then built upon this experience to help launch JSTOR,” continued Johnson. “He managed the partnership with Google to digitize the University of Michigan’s collection, eventually leading to the foundation of the HathiTrust. As executive director of the HathiTrust, John established a model for shared governance and large-scale collaboration that secured sharing provisions for member libraries.”

“In his current role as university librarian at the University of Illinois at Urbana-Champaign, John continues to lead innovation efforts, particularly in the area of research data curation,” noted Johnson. “All of these achievements have had far-reaching impact in the library profession and beyond, providing a foundation for transformation in publishing, research, and unprecedented access to digital content.”

For more information regarding the Hugh C. Atkinson Memorial Award, or a complete list of past recipients, please visit the awards section of the ACRL website.