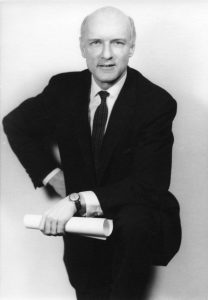 Heinz von Foerster, one of the scholars whose work will be made available through the grant. Image courtesy of the University Archives, record series 11/6/26, box 116.

The University of Illinois Archives has been awarded a grant from the National Endowment for the Humanities (NEH) to develop a prototype web-portal and analysis-engine to provide access to archival material related to the development of the iconic, multi-disciplinary field of cybernetics.

The grant is part of the NEH’s Humanities Collections and Reference Resources Foundations program. The project, entitled “The Cybernetics Thought Collective: A History of Science and Technology Portal Project,” is a collaborative effort among several academic units at the University of Illinois (U of I) and three other institutions that also maintain archival records vital to the exploration of cybernetic history: the British Library, the American Philosophical Society, and the Massachusetts Institute of Technology. In addition to supporting the development of a web-portal and analysis-engine, the award will enable the multi-institutional team to begin digitizing some of the archival records related to the pioneering work of U of I Electrical Engineering Professor Heinz von Foerster and his fellow cyberneticians W. Ross Ashby (also a former U of I Electrical Engineering faculty member), Warren S. McCulloch, and Norbert Wiener.

“This grant will afford us the unique opportunity to explore connections between these four individuals—Heinz von Foerster, W. Ross Ashby, Warren McCulloch, and Norbert Wiener—and to better understand how they influenced each other and the context in which their ideas evolved. It will also enable us to shed light on hidden connections between documentation within their research archives,” said Project Director and Lead PI Bethany Anderson. “We are excited to see where these connections take us and are grateful to the NEH for its invaluable support for this ambitious project.”

Cybernetics emerged during World War II as the science of communication and control systems used to build automatic antiaircraft systems, but gradually became a vehicle through which scientists, engineers, humanists, and social scientists studied the complexities of communication and self-organizing systems. Cybernetics is generally regarded as one of the most influential scientific movements of the 20th century. At a time when postwar science had become highly compartmentalized, cybernetics epitomized the interdisciplinarity that has become emblematic of innovative research in the modern era. This project will provide greater access to the archival materials that document the rich and complex history of the “thought collective”—the scientific community of individuals exchanging thoughts and ideas about cybernetics, including scientists and researchers affiliated with the University of Illinois’ Biological Computer Laboratory (BCL).

The development and archival work for this project will extend from May 2017 to April 2018.  The project team from the University of Illinois includes Bethany G. Anderson, Archival Operations and Reference Specialist in the University of Illinois Archives (Project Director and Lead PI); Christopher J. Prom, Assistant University Archivist and Andrew S. G. Turyn Professor in the University of Illinois Archives (Project Co-Director and Co-PI); Kevin Hamilton, Professor of Art and Design (Co-PI); Dan Roth, Professor of Computer Science (Co-PI); and Jamie Hutchinson, Editor for Engineering Publications in the Department of Electrical and Computer Engineering (Project Collaborator). Among the collaborators from the partner institutions are Jonathan Pledge, Curator of Contemporary Archives, Politics and Public Life at the British Library; Tom Rosko, Institute Archivist and Head of the MIT Institute Archives and Special Collections; and Charles B. Greifenstein, Associate Librarian & Curator of Manuscripts at the American Philosophical Society.

Visit the “The Cybernetics Thought Collective: A History of Science and Technology Portal Project” website for more information.

To read the full press release, see the NEH site.