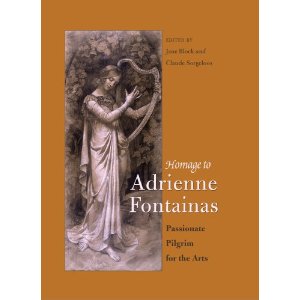 Congratulations to Jane Block, Head Librarian of Ricker Library of Architecture and Art, for the publication of Homage to Adrienne Fontainas: Passionate Pilgrim for the Arts this November. Homage to Adrienne Fontainas is an interdisciplinary festschrift for Belgian bibliophile and art historian, Adrienne Fontainas. Jane co-edited the book with Claude Sorgeloos, Chief curator of the Rare Book Room of the Bibliothèque Royale de Belgique. The volume contains twenty-two essays contributed by Belgian, French, and American scholars to honor the memory and work of Adrienne Fontainas (1929-2010).Jane contributed the article, “Paul Signac’s au temps d’harmonie at Victor Horta’s Maison du Peuple,” which can be found on pages 237-268 of the festschrift. Below is a short summary of her article:

Paul Signac’s large allegorical painting, “Au temps d’harmonie,” was completed in 1895, and hangs today in the Mairie in Montreuil, a commune east of Paris. Signac offered it to the Belgian Workers’ Party with the intention of hanging it in the party’s new headquarters in Brussels. The building, the Maison du Peuple, was designed by the leading art nouveau architect, Victor Horta, and was built between 1896 and 1899. How Signac’s Belgian connections led him to make this proposal, his difficulty in finding a suitable location for his painting in Horta’s iron and glass building, and why Signac eventually withdrew the offer, remains an untold tale and provides further insight into the complex interplay among art, literature and architecture in fin-de-siècle Brussels.