Although this entire trip was exciting and I had so many new and fascinating experiences, one day stuck out in particular. On the third day of the trip, we woke up fairly early and, with reminders to choose good footwear and to bring plenty of water, headed out to the Guánica Dry Forest. The Guánica State Forest, which is located in southwest Puerto Rico, is considered to be one of the best preserved subtropical forests in the Caribbean. One interesting fact about this forest is that about half of Puerto Rico’s bird species and nine of the sixteen endemic bird species populate it. It is about 9,500 acres, making it the largest tropical dry coastal forest in the world.

Once we arrived at the entrance to the forest, we were greeted by a closed gate. This gate, when open, allows vehicles to pass through in order to get to the parking lot at the top of the mountain. Because it was Día de los Tres Reyes Magos (Three Kings Day), we figured out that the person who usually opens the gate must have had the holiday off. After making this realization, we decided to walk around the gate and walk the distance to the parking lot, adding on this distance to the rest of our planned hike. On the way there, our professor pointed out multiple large termite nests on trees and the trails that these termites left behind along the road. The weather, while the trail itself was not very difficult to hike, made for a more intense hike as it was hot and humid and despite there being many trees on either side of the road, there was not much shade. The next interesting thing we saw was a 700-year-old Guayacan tree (which is pictured below). After sitting on the above-ground tree roots to take a break and take a few pictures, we began to hike again, with our next destination being the beach.

Slightly exhausted from the heat and humidity, our pace sped up as soon as we could see the water. Once we were actually at the beach, almost everyone immediately ran to get into the bay. After swimming for a bit, which mostly consisted of me trying not to get overtaken by the high, rough waves, I, along with two other classmates, decided to try to find a good coconut to break open. After a bit of time searching on the ground, we decided to try to get one out of a tree to avoid breaking open a rotten one from the ground. To do this, we picked up coconuts from the ground and threw them at the ones in the tree, which was both safer and more effective in getting them down. After about five minutes of throwing the ground coconuts, we were able to get some down from the tree. The only problem was that the coconuts from the tree were not ripe and we could not get them open. After this realization, we decided to take the risk with the ground coconuts and began to work on breaking one open. We worked through the coconut’s husk, tearing the fibers away and finally got to the hard internal shell which held the meat of the coconut and the water. We broke open this shell, obviously very proud of this accomplishment, and tasted the fruit and water. The rest of our time at the beach was spent eating peanut butter and guava jelly sandwiches and relaxing. 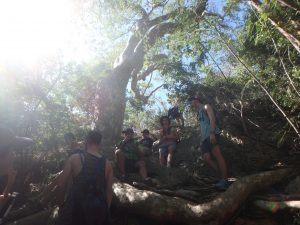 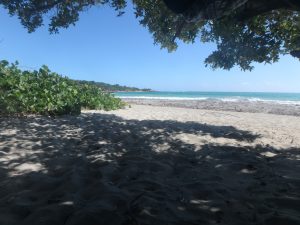 One thought on “Guánica Dry Forest”