My personal identity is something that I spend a lot of time thinking about. One of the greatest concerns that I have right now and something that I have been trying to figure out for a while is what I want to do with my life. I am currently majoring in Agricultural and Biological Engineering but the only thing that really interests me in this major is the Renewable Energy Systems concentration. I also am interested in Aerospace, and jet propulsion, for spacecrafts and such. And I also find robotics pretty cool. At U of I’s engineering school they make it so hard to transfer to different programs (which literally just makes me want to punch a hole through a wall) but makes me feel an urgency in figuring out what I want to do, which I really don’t know yet. One thing I know is that I want to be an engineer and that I love solving problems, and there were a few separate occurences in Puerto Rico that helped solidify this for me.

The last hotel that we stayed at was an Eco Lodge in the middle of the Rainforest. There was a ten minute hike that we could took from the lobby that led us to a river. The river was not a river that one could canoe in because there were many big rocks sticking out of the water that are all pretty close to each other. Once we got to the river, I jumped on one of the rocks, and then another, avoiding the water underneath. I kept doing this and made my way down the river, however with every rock I had to figure out a way of climbing on it, getting to the next one, and to navigate the best path down the river. Sometimes the rocks were slippery and I had to try and stay on without slipping and falling. A few times the only way to get to one rock to another was to jump. I think this reflects my identity pretty well. I am a very adventurous person, and I really love putting my body on the line and taking risks. I really hate looking back on things and regretting, so I try to take every opportunity that I can. I also love solving problems, and I really liked looking down the river and finding the best route. 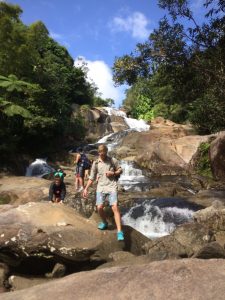 Us navigating a route down the river going from rock to rock.

We went to a couple plantations during the trip, one sugar and one for coffee. I generally am pretty underwhelmed when it comes to farming, and it does not interest me at all; so when the talked about the plants and stuff it was hard for me to get excited and be engaged. However once they stopped talking about the planting and got to the machines it was a whole other story. The machine used for crushing the sugar canes is recognized as one of the greatest mechanical engineering feats for its time, and while looking at it I could tell that it was very advanced for the time that it was built. I was in the back of the group as we approached it and once they turned it on I made my way to the front and just stared at it trying to understand how every part worked. I looked at it for a few minutes and asked Dr Rodriguez a couple questions about the mechanics, that now make sense to me. At the coffee plantation the machines were also very interesting. In fact, there was this machine that was used to filter the different coffee fruits based on their density, so that they could only collect the better, denser ones. I think it is really cool that they can construct a machine so that it can do all of that.

On this trip we also visited the engineering University, where we met Dr Luis Perez. He told us about the school then took us out and showed us a farm and the dam. Although I was sick for that day I did get a piece of paper that showed the path of the irrigation system, where the dams are, and how it works. I liked seeing this because it provided me with an example of an application of the things that we are learning. We also went to another location near San juan where we got a lecture from Perez, and the lady that wrote the article we discussed in class. Perez took us through one of the projects that he was working that had to do with wastewater, experimenting to test for different minerals in the water. Seeing these two applications of Agricultural and Biological Engineering, it really made me want to get out in the world and help. I like to tackle problems especially on the actual sites and my place in the world is to use engineering knowledge to save our planet, this makes me think that once I learn the basics, my identity will allow me to do great things.

One thought on “Identity and Place in the World”