Going to another country – or even another common wealth of the same country – can pose to be difficult when you don’t speak the native language. Spanish is the native language in Puerto Rico, and from what I’ve seen, only a select handful of people can speak English. I noticed that in Old San Juan, – the more touristy area of the island – most if not every one of the workers speak English. This is because tourism is a huge part of Puerto Rico’s economy, with ships bringing in thousands of tourists on a daily basis. An action I could take to address the language barrier is to be more respectful of the locals by trying to accommodate to what they’re trying to say. I could try speaking as best Spanish as I can, especially since I’ve taken three years of Spanish in high school. I could be more open to learning what they’re trying to say by sounding out the syllables as they speak to me. Another thing I could do is to not assume that people who don’t speak the same language as me are less intelligent.
People in Puerto Rico live by “island time” and take things easy. While this is good if you’re vacationing, I could definitely see this as a lack of efficiency in the long run. Because everything is taken so easy, it could be hard to schedule a day without accommodating for some issues that might arise. A prime example of this is when we hiked the dry forest; the gate guard wasn’t on duty because of a local holiday. Nobody told us anything, and I’m sure it was just a spur-of-the-moment type of thing. An action I could take is to just live by “island time” amongst the locals. Take things slowly while I’m vacationing on the beautiful island. If things do go as planned – which many things at this point have not – I can just deal with it and move on with my day. No big deal.
As for the environment, there is at least one obvious issue. I’ve seen many pieces of plastic washed up on the beaches. This problem is not in the hands of Puerto Ricans but collectively all the people who live on earth. Because of improper handling of garbage, plastic debris floats in our oceans by the tons. An action that I could take is to pick up any piece of plastic I see on the beach – whether it be big or small. This small action could actually make an impact because then animals wouldn’t confuse small pieces of plastic with food. Another action I could take is to use less plastic in general and be more conscious of recycling. The next time I’m in a grocery store, I’ll bring my own bag, for example. I’ll bring along my own reusable water bottle before taking a disposable plastic one.
Another not-so-obvious issue with the environment falls in island transportation. I noticed that there is no public transit system on the island. This causes lots of traffic, more air pollution, and more use of imported gasoline. I’ve also seen garbage cars left in pieces parked outside of homes and along the street. This takes up space and isn’t appealing to tourists visiting the island. There is no direct solution to these problems. All I can do is to inform others of my observations in hope that something changes.
On the second and third nights of our trip, we witnessed a Three Kings Festival. The local town was crowded full of people, the houses had decorations, and even a band came to play live music for the festivities. While this is wonderful for most of the locals, there could be a potential issue. Are all residents of Puerto Rico Christian? How about the tourists? There could be some issues with clashing religious beliefs. An action I could take is to respect Puerto Rico’s local holidays, even if I wasn’t Christian. 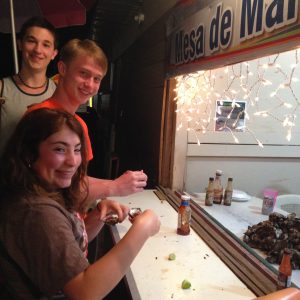 We ate freshly harvested and prepared oysters from a local stand in the town. 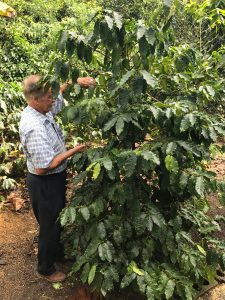 Bernando ran a coffee plantation all by himself. He could speak very little english, but he tried very hard to speak to us the best he could. Dr. Rodriguez eventually had to translate, but we all tried as best we could to understand what Bernando was saying.