Puerto Rico has the perfect climate to grow a variety of crops. It used to produce a large percentage of its food, but the percentage has dramatically reduced in recent years. As we learned from one of our presentations at the University of Puerto Rico, Puerto Rico imports about 80% or more of its food. This number is astounding, considering it has resources and the climate to produce much more of its food. Not only does importing goods cost much more money, it also uses gasoline and other resources to ship things that could be produced and consumed on the island itself. Another point to consider is that there is a decline in farmers, and the farmers that remain are getting old.
A solution to this problem is not easy to pursue. There are resource issues, political issues, and human labor issues. One way to go about solving this problem is to give out tax incentives. If there were good incentives to become a farmer, then more people would do so. This could be by giving out free or subsidized land, establishing price floors, and promoting agricultural growth. Agriculture needs to be more attractive as a career to the young generation. Along with agriculture comes harvesting machinery, processing, and distributing. All of these fields would expand, creating many jobs and stimulating Puerto Rico’s economy. We also learned that Agriculture contributes to less than one percent of Puerto Rico’s GDP. That’s just sad when there’s plenty of rain and sun to theoretically grow crops of all sorts. We would measure the success by the change in agriculture contribution to Puerto Rico’s GDP, as well as the percentage of food imports to the island. These numbers would tell us exactly how effective these solutions are; an increase would show that more jobs are kept in Puerto Rico itself. One underlying risk is if the farmers produce too much and lack in processing or transportation mechanisms. The opposite could happen too – farmers might not produce as much as they expected, so there’s an abundance of post-harvest facilities.

Another issue that is related to Agriculture comes from the soil itself. We learned that the soil in areas of Puerto Rico have high salinity content, making it hard for crops to thrive. We also learned that there is already somewhat of a solution in place for this problem; planting fields of rice actually absorbs the salt and makes the plot usable for other crops. I thought this was a phenomenal solution, but I noticed that the area in which the rice was growing didn’t quite have the right resources to properly farm and harvest the crop. I didn’t see any large storage bins or harvesting machinery for that matter. It’s nice that the government is testing new crops, but there should really be more infrastructure in place to help the farmers. A solution would be that the government provides the necessary machinery to properly harvest and store the rice. If they are the ones to launch a pilot program, there should be support to follow through with the project. We would measure the success in rice fields by comparing the salinity content before and after to make sure the plots are suitable for other crops. Another way to measure success is if there is no waste in harvest due to machinery involved in the process. An underlying risk is if the government provides equipment without enough farmers to work the plots.
I’ve noticed that there is no public transportation on the island. There are even some train rails carved into the ground with no train to use them. This is problematic because Puerto Rico already has to import all of its gasoline. Also, space will definitely become an issue if it isn’t already. There’s only going to be a growing amount of people and cars on the island, so public transportation is only becoming more important. Having some sort of bus or train system would greatly improve travel efficiency. People who can’t afford cars will still have a means of transportation. There would be less gas use and less pollution. While there is no easy way to implement a bus and train system, it could definitely be done with the right resources. The government needs to intervene and get outside support to draft plans. A way to measure success if to determine what percentage of the population use public transportation and to do a cost-benefit analysis to see if it was worth the money invested. Another way is to compare the amount of pollution released from the island before and after implementing public transportation. The last way is to compare the difference in traffic patterns before and after implementation. One underlying risk is that it might cost a lot of money and not be used as much as expected. 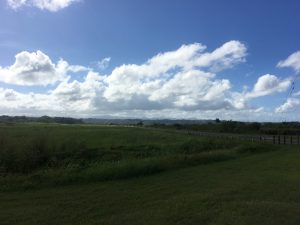 Here’s a picture of a sugar cane plot. Sugar cane used to be one of Puerto Rico’s biggest exports but has declined dramatically in recent years.

4 thoughts on “Challenges in Puerto Rico”