Oh my gosh, where to begin? This trip has had so many great times. From our rocky start to our slippery finish, I have to say that this is by far my favorite class that I have ever taken! We have accomplished so much here in Puerto Rico from tours, to excursions, to lectures, and more, so to narrow it down to my single favorite, I’ll just pick the most recent. This being the bioluminescent bay.

Coming off feeling like death itself, the bay made my heart leap, and boggled my mind with its beauty. In the daylight, the bay casts the shimmering light of the sun on the pearly white sailboats in the harbor, and feels warm from the long day. We reached the bay a while before our scheduled departure so we could get dinner and search for some more souvenirs if we so desired. We dispersed and regrouped in about an hour by the bus to drop off the things, and made our way to the glass bottomed kayak stand for our reservation.

Shortly after we arrived, the last tour made their way to the shore and we underwent a relatively short instructional briefing. We were told all the safety measures and commands that they would use should we lose control of our kayaks, and were equipped with our life jackets. We then paired up and got in line for our respective kayaks. The guides brought the Kayaks one by one to the shallow water to help us get in properly, gave us our paddles, and sent us off to start the adventure.

The moon, thoroughly risen, shone above illuminating the bay, helping us maneuver around the anchored ships and toward the mangroves. The canopy of the mangroves formed a tunnel that blocked out the moonlight leaving our group in a state of pitch black wonder. We navigated the channel as best we could with the guides, only having a few minor catches with as little shouting as can be expected. We were not the only ones in the channel though, there were several other tours, some in kayaks, others in the boring safety of larger tour boats. We crossed paths, and the guides exchanged friendly banter, while keeping all of their customers safe and happy. The journey probably took twenty minutes from the shore to the actual bioluminescent bay.

As we emerged from the canopy of the mangroves, the light of the moon stung my eyes with how bright it was, while also striking me with its beauty. Making myself look away, I dipped my hand into the water to see if the water would glow. At first, I saw only sparkles in the water that I assumed were just the refracted light of the moon. Later I realize that the few sparkles were actually the microorganisms lighting up.

Once everyone had emptied from the mouth of the channel, we were again given a short briefing on what our purpose was, and were asked if we saw the bioluminescence on the way in, and were told that the best way to stir up the organisms was to put our arm into the water up to our elbow and then move our hands. It was amazing! As we paddled around the bay, the bow of the kayaks stirred up the organisms enough that they would shine as we passed over the water. Because of this, we could see the lights through the glass bottom of the kayak. They almost looked like stars.

After what seemed like a half an hour, we grouped back up and headed down the channel in a single file row again. The guides took our pictures for their Facebook page Glassbottompr, and led us out safely to shore where we disembarked, partook in a few refreshments, and watched them pack away their kayaks. All in all, I would highly recommend this experience to anyone and everyone who wants to see a beautiful awe inspiring natural wonder. 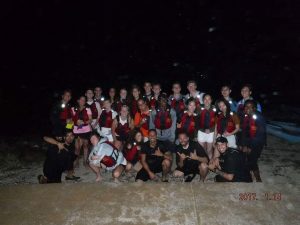 The entire group on the tour, including the guides 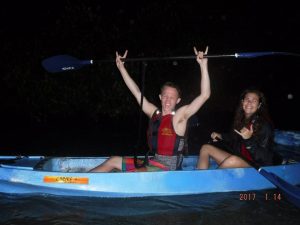 Emma and Matthew Rocking the Kayak and Paddles