Water. It is what keeps the world going. It especially keeps the agricultural world running. Weather it is the water going into our food, or the water we need to cross to get our food, either way, it directly impacts the price of food around the world. Its availability and quality directly impacts the price of every product down the line. So, now that we have determined that water plays the key role in determining the price of food, we can look at how water affects Puerto Rico’s food prices.

First off, unlike Illinois, Puerto Rico has many different climates for its relative size. It has the relatively tropical north, the rainy, mountainous interior, and the dry south. All of which have their own agriculture, but each has its own needs regarding water. The north and interior are actually the best off only really requiring drainage, while the south desperately needs all the water it can get. Funny as it is, a fair amount of Puerto Rico’s agriculture takes place in this dry flat land, but how? That was answered when we visited the reservoir, dam, and water channel.

To catch the runoff from the mountains, some dams were built by natural basins in Puerto Rico. They hold water for distribution for nearby farms, and when they become too full, they either turn turbines to generate electricity, or just overflow on their way to the next reservoir downstream. The distribution system was interesting. The dam we visited, had a siphon that used the pressure of the water in the reservoir’s own weight to push the water up a hill in a pipe to a channel that was open to the air. The water then traveled down the channel to be distributed to farms. Each farm would then pay for access to the channel. The access points to the channel were effectively a gate that had to be wound open. The water would then flood from the channel to the field.

This system is extremely different to what we have in Illinois. Usually, our agriculture gets all of its water from precipitation, but if it is supplemented by an outside source, it probably comes from a tank or a hose.

Next is the quality of the water. In Puerto Rico, many of these channels, especially in the north become contaminated. When the seasonal rains come, everything floods. This includes the sewers. Evidentially, this sewage water finds its way into the channels. The same channels that lead to reservoirs that hold water for the farms to use. This contaminated water then is used for crops, or it gets treated to be used for drinking water.

Unfortunately, because this flawed system is in place, it leads to some of the high prices in Puerto Rico. This problem, while great, is greatly overshadowed by the fact that most of Puerto Rico’s food is imported. Approximately eighty-five percent of all of the food in Puerto Rican stores does not come from Puerto Rico. This is a major problem because it costs insane amounts of money to ship all that food from wherever it was made across the Caribbean.

Over all, it was amazing that the prices of food in Puerto Rico were not completely outrageous. They were a bit high, but nothing compared to what it could be. The best way to encourage lower prices of food would be to continue to encourage the purchase of domestic products. Hopefully, that would make amount of imported food go down. Regardless of what happens though, Puerto Rico has a very long way to come if it wants to do that. 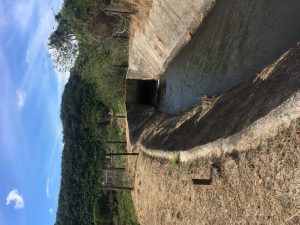 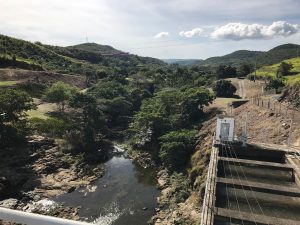 From the top of the dam, you can see how much water flows on its way to the next reservoir