By 9 AM, my entire group was packed into a van excited to go to a “beach”, but little did we know, this beach that we were heading to had so much more in store for us. Upon driving up, some of my cohorts started to notice large pools that contained a questionable white substance. Soon after asking our professor what the substance was, we learned that the mounds of white substance on the ground was salt and that the location contained dozens of salt flats. Salt flats are flat expanses of ground covered with salt and other minerals, which shine white under the sun. They are found in desert-like environments, and are natural formations. Flats form by evaporation of a water pools such as a lake or pond. This happens in climates where the rate of water evaporation exceeds the rate of precipitation. Some of the students found this interesting, but our curiosity was quickly overshadowed by the excitement seeing of the beach.

With a cooler in tow, all 12 of us briskly walked towards the beach, eager for the day’s activities. After setting up camp and being told of a few hiking trails, we all went running into the water. With great splashes and some stumbling, we all were in the slightly warm water. Although the water was not exactly clear, the color was a brilliant blue. The calm waves made it extremely relaxing for me to just float on top of the water. Along with a few friends, I enjoyed the water, swimming around and talking, but after about an hour or so, my friends and I had the urge to be children again. With a frisbee that we found on the beach in hand, my friends and I began to build a mini pool within the sand. With the sun scorching our backs, we dug and dug in the sand until a slightly deep hole started to form. In order to protect our creation and fill it up with water, we constructed a sand wall and dug a little channel going down towards the water so that when the waves came to shore, it would flow into the pool. When we finished, we turned to admire our work and sat down inside of it to quickly take a picture before it was washed away. 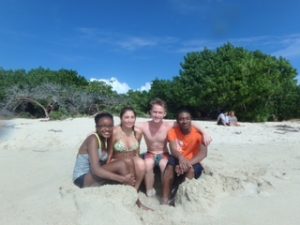 After working together to create a pool like structure, we celebrated by spending some time sitting down and relaxing.

Famished and exhausted from the sun, we decided to take a break and eat some food. During this break, we decided that we were going to do some exploring. After finishing our food and asking our professur what exactly what was available to see, we set off in search of the lighthouse located near by. Not wanting to change into my gym shoes, I went on this venture in flip flops. While walking up, we found two trails: the clear path and the one less travelled. Being adventurous, we took the one that was less travelled. The path being riddled with plants and the path hardly visible, we made our way up a hill only to find the pathway disappeared. With a small sense of disappointment, we turned around and took the clear pathway to the lighthouse. After climbing up a very rocky and pebbled path, we reached the light house. After looking around the main floor and finding that we could hardly read the information that was displayed because it was all in Spanish, we decided to see the views from the top. After walking up a winding staircase, we reached a rooftop like clearing and I saw one of the most beautiful sights I ever experienced. To the left, I could see various large pools of water all different in color and the salt flats. In the middle I saw glorious grassy hills and rock formations; and to the left I saw the magnificent ocean and the sheer, jacked and breathtaking cliffs.

After, spending a great deal of time taking in the views, we decided to go to the cliff. Walking up, you would not think much about these cliffs, but as we started we reach the edge, we quickly realized how dangerous they were. The cliff’s edge dropped down more than a hundred feet and ended with raging waves and jagged rocks. Filled with adrenaline, I walked to the edge and sat down and stared out into the ocean view. One of my friends was even daring enough to climb down and around the rocks to a lower cliff ledge. With considerate caution, we navigated the cliff’s edge and saw various views from different locations. Each time we moved, we continued down the rocky, and hilly terrain. At various times during the descent, we would walk to the edge, each time getting closer and closer to where to beach began. During certain points of the descent, the floor was pebbly and once when I was walking down, my feet slipped on the rocks and I tumbled down. Luckily for me, I was not close to the edge and one of my friend caught me before I could completely fall to the ground. Scared that a horrible event would occur, we retraced our steps to the main path and continued our descent and before long, we rejoined the group. 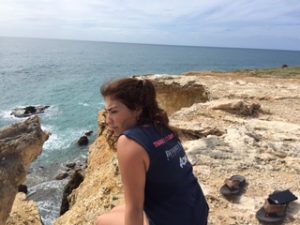 While at Playa Sucia or La Playuela, I along with other students explored around the area and sat along the death defying cliffs.

The events that day impacted my life in many different ways. It taught me how beautiful nature can be and to appreciate it. It taught me that I am more courageous and adventurous than I thought I was. It taught me that sometimes, exploring new places can lead to the best memories and lastly, it taught me that making new friends and experiencing things together for the first time is a way to possibly create lifelong friendships. This experience has sparked my interest and has makes me look forward to future study abroad opportunities and my future career in environmental science. I am extremely grateful for the experiences that occurred.