There are many topics pertaining to the Monteverde Cloud Forest that we could speak on, but we will be focusing on two: typical weather patterns and their indications, and the noticeable effects of climate change.

Typical weather patterns of a cloud forest and their indications

Cloud forests occur within tropical mountainous environments where there is consistent cloud cover and make up 1% of global woodland (“Monteverde’s Cloud Forests.”). A cloud forest is characterized by nearly 100% humidity throughout the year (“Monteverde Costa Rica”). A consistent inflow of warm, moist air from the Atlantic ascending the mountains creates the perfect conditions for a cloud forest. As seen here , the cloud cover keeps the forest covered in warm, moist shade. (The linked video was taken at the Continental Divide in Monteverde Biological Reserve). 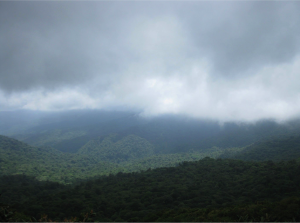 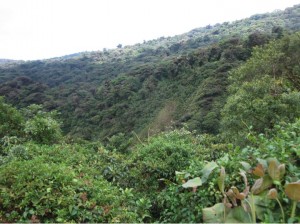 The cloud forest receives a large amount of rainfall, with a yearly average of 102 inches, or 8 feet (“Monteverde Cloud Forest Biological Reserve”). Trade winds blow northeasterly (e.g. toward the southwest) off the Atlantic Ocean bringing moist air that ascends the east side of the mountains, creating clouds and producing precipitation. Air then descends down the west side of the mountain evaporating the moisture and reducing cloud cover, creating a more dry environment on the Pacific side of Costa Rica. The contrast can be seen in the video here (The linked video was taken at the Continental Divide in Monteverde Biological Reserve). Winds are strong and cloud cover is abundant on the Caribbean side, while on the Pacific side winds are more calm and skies are clearer.

Vegetation reflects these weather patterns. Thicker, larger vegetation is found on the Caribbean side of the continental divide (east of the mountain range) due to the nearly constant cloudy state, leading to a slower rate of evaporation and a greater abundance of moisture, therein leading to more variety and abundance in biodiversity. Less dense, smaller vegetation on Pacific side of the continental divide (west of the mountain range) due to the lack of cloud cover and decrease in moisture.  Taller vegetation at lower altitudes where wind is not a hindrance to growth and temperatures are generally warmer, and shorter vegetation at higher altitudes due to the stronger winds putting stress on the plants and the colder temperatures that come with these strong ascending winds (since air cools at is rises). 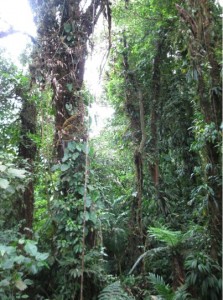 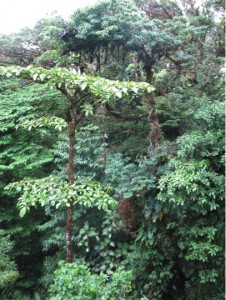 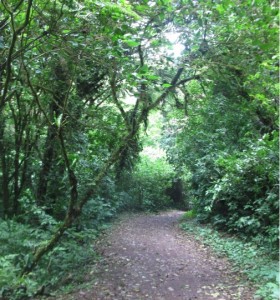 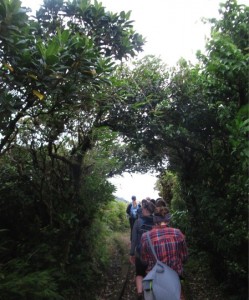 It can be seen in the pictures above that as we continue hiking up to the Continental Divide, vegetation begins tall and shortens with altitude.

Climate change and its effects 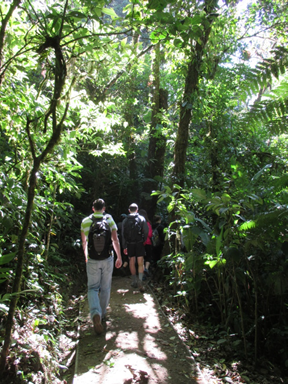 The vast cloud forest in Monteverde, Costa Rica is one of the worlds many biodiversity hotspots. It houses about 100 species of mammals, 400 birds, 120 reptile and amphibian, over 2,500 plant species and thousands of types of insects. Of the plant species, 420 are orchids alone. There are more than 60 different species of avocado trees that most of the wildlife depend on for food. To put things into perspective, Illinois has about 20-30 different total species of trees in its forests. Many of the species found in the Monteverde cloud forest are endemic and only about 2% of all these species have been thoroughly researched (“Monteverde Biological Cloud Forest Reserve”). 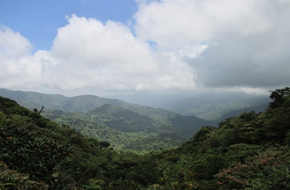 There is still much that can be learned from the forest for economical and social purposes. But because the cloud forest is formed under a very specific climate, the slightest change can have big consequences. The effects of climate change are becoming evident in Monteverde, just by looking at the changing behaviors of plants and animals. 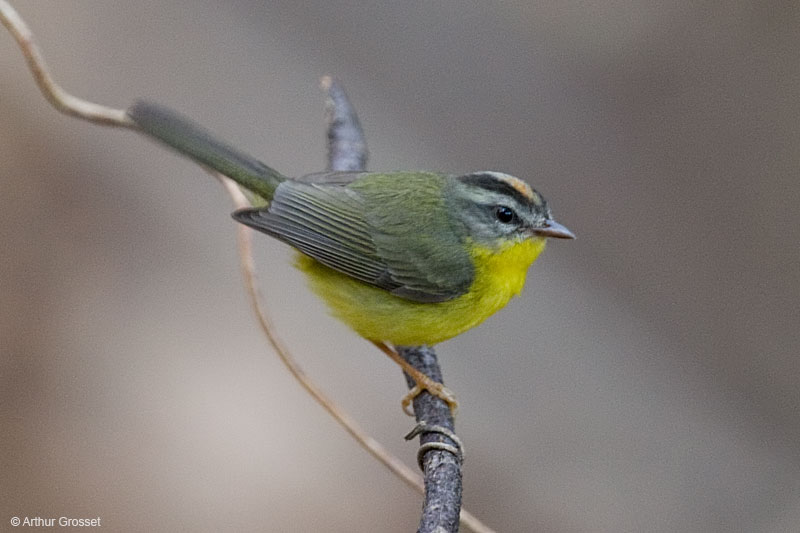 Due to topographic changes down the slope of the mountain, different species of plants and animals prefer to live at distinct altitudes. This stratification of different species is key to determining climate change. The warbler is a good example of this behavior. The golden crowned warbler generally lives at lower elevations along the base of the cloud forest. According to a local cloud forest guide and researcher named  Mark Wainwright, the golden crowned warbler have started to make their way up the mountain. He claims that 15 years ago he never saw them in the area but in recent years he has spotted a few birds at higher elevations.

As cloud coverage at low elevation is reduced, intense sunlight causes temperatures to rise which can have a great impact on the hydrologic system of the forest. If temperatures rise enough, the forest would dry up. This is how climate change causes the cloud forest to recede up the mountain.  The warblers can detect changes in their environment so they too work their way up the mountain finding new homes.

Warblers are not the only example of this behavior. Several species of bats also show these trends. According to a bat researcher named Vino Backer, it was estimated that for an average temperature rise of 2° Celsius, bats will climb 400 meters in altitude. Not surprisingly plants are slowly moving upward as well. Because the cloud forest is so dense, plants have to compete for soil and sunlight which slows their migration process.  There is still little information on the movement of plants; but Mark claims he has spotted an aggressive species of orchid at higher altitudes than normal. Trees can take the longest time to migrate purely because they take many years to grow to a substantial size. 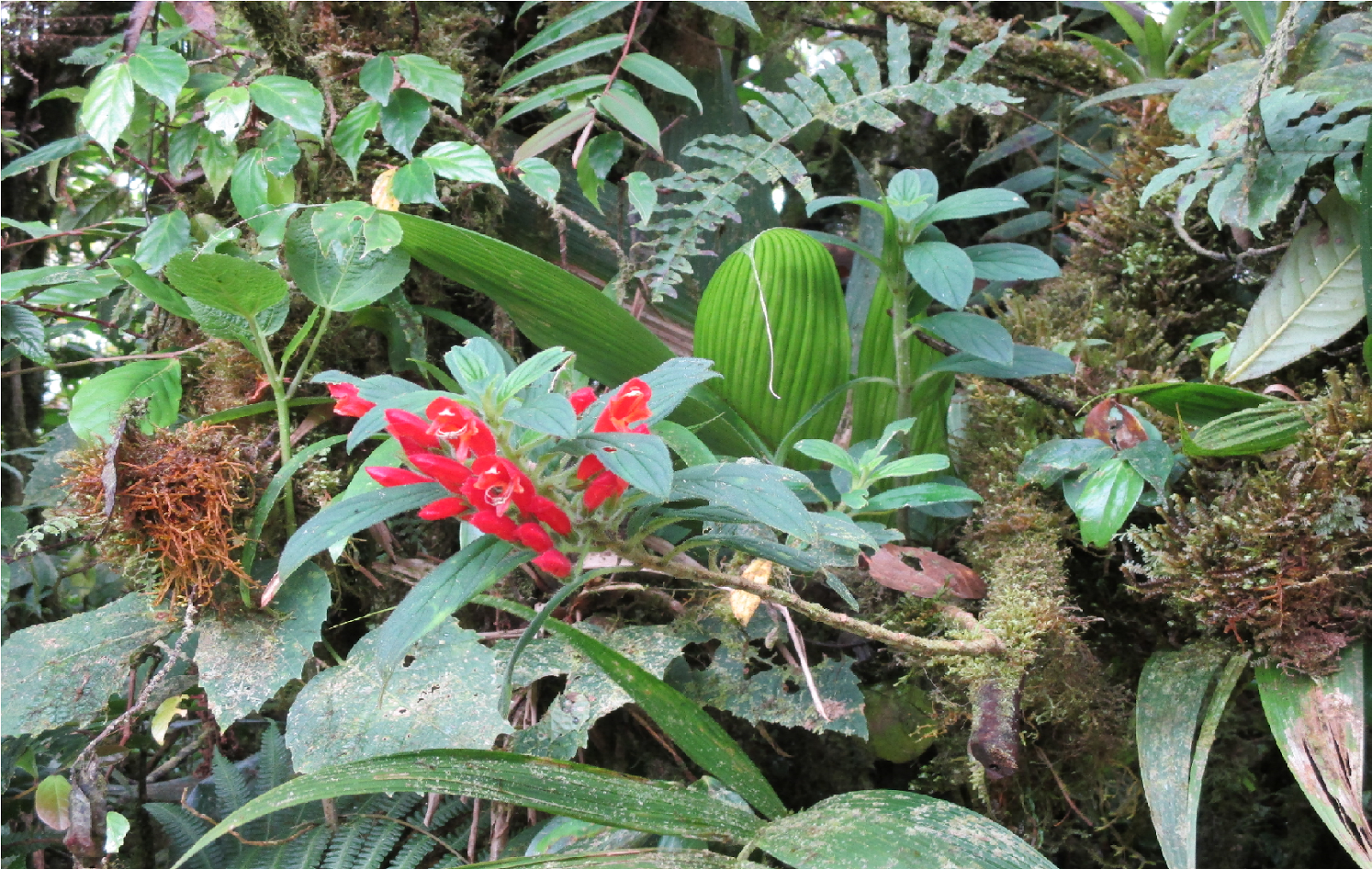 As more plants and animals make their way up the mountain, we lose more cloud forest. Species that can’t migrate fast enough or adapt to their new dry environment will go extinct. Some species, such as the golden toad, have already been speculated to have been lost. If nothing is done to slow climate change, the cloud forest and all its secrets will surely be lost forever. 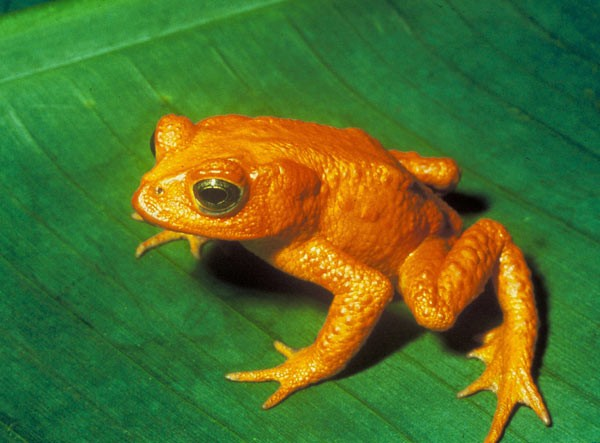 The cloud forests of the world are in danger in the far future, but this year there are imminent changes ahead. An El Niño state is likely on the rise in the Pacific Ocean this year; this means sea surface temperature anomalies will be higher than usual, and this directly affects the weather of Costa Rica. This mechanism of warming would warm overnight temperatures and overall temperatures near the coast. Heat waves wouldn’t necessarily be increased, but the heat waves that do occur would be more uncomfortable due to increased humidity in the lower atmosphere and decreased overnight cooling (Swain).

Increasing humidity on the Pacific side of Costa Rica would cause increased rainfall. An added increase rainfall could potentially increase the risks of landslides and flooding on the Pacific side, making conditions for the population more dangerous during an El Niño.

The decreased overnight cooling could affect the nocturnal animals that rely on the cooler temperatures to hunt at night. This would change the dynamic of the ecosystem on the Pacific side and could affect tourism in the process.

Based on the available observational evidence and current model forecasts, it seems exceedingly likely that El Niño conditions will officially be declared later this summer. The current ocean temperature anomalies suggest that a strong El Niño event remains possible, and additionally may be an East Pacific-centered event (Swain). If this event is as strong as it is predicted to be, the reaction of the ecosystem and weather patterns in Costa Rica can be compared to what would happen with increased global warming. Hopefully these noticeable changes will kickstart a change large enough to save the cloud forests.