Most of our recent research work and funding has been to address the somatic mutation hypothesis (trees as mosaics of genetic variability), the role of endoreduplication, and the underpinning molecular pathways leading to the phenomenon known as overcompensation in plants and most recently the molecular interdependence of plant tolerance and resistance. We have been using large genomic datasets (whole genome transcriptomics, RNA-seq, and whole genome resequencing) and knockout mutants in addressing several of these issues including compensatory pathways and somatic mutation.

Somatic Mutation in Long-Lived Trees
The somatic mutation hypothesis proposes that individual plants and some clonal invertebrates accumulate spontaneous mutations and ultimately develop as genetic mosaics (Whitham 1981, Whitham and Slobodchikoff 1981, Gill et al. 1995). For example, the modular and layered nature of plant tissues provides the basis for mutations to occur and then be perpetuated through cell division and differentiation, potentially creating genetic heterogeneity within an individual. Such variation could subsequently spread through both sexual and asexual means. Although this hypothesis has been addressed to some degree from both theoretical (e.g., genetic models of somatic mutation [Slatkin 1984, Antolin and Strobeck 1985, Folse and Roughgarden 2012]) and empirical perspectives (e.g., neutral markers such as microsatellites [Lushai and Loxdale 2002, Reusch and Boström 2011] and the genetic underpinnings of a somatically derived trait [Vezzulli et al. 2012]), the level of somatic variation within an individual has not been assessed from a gene level/whole genome perspective, and thus the role somatic mutation potentially plays as a mechanism for evolutionary change is unknown. Somatic mutations would be particularly favored in long-lived, clonally propagating plants such as trees and could be of evolutionary importance by providing a way in which plants could keep up with, or potentially out-run, their pests and pathogens in a coevolutionary arms race or serve in fine-tuning an individual to changing environmental conditions. Over the past thirty-two years the somatic mutation hypothesis has been bantered about with no clear resolution as to its ecological or evolutionary importance (Whitham 1981, Whitham and Slobodchikoff 1981, Gill et al. 1995, Ruesch and Boström 2011) primarily because it is not known how much variation can be generated and perpetuated within an individual plant at the level of the gene. We have recently assessed the magnitude of within plant genetic variation in the model system black cottonwood, Populus trichocarpa, and the prospects for evolutionary change in their clonally derived offspring as measured by changes in amino acids.

We assessed within-plant genetic variation in black cottonwood and the prospects for evolutionary change as measured by changes in amino acids. We resequenced entire genomes from a multitude of tissues (i.e., bud, stem, and root tissues) of individual trees (parent and clonally derived offspring) using the Illumina platform. On average 4,840 unique amino acid changes were found in 2,569 genes within each of 5 tissues sampled within each individual parental tree and it’s clonally derived offspring (Figure 1). We also show the differential spread of approximately 1,500-1,600 of these mutations across two to three tissues within an individual tree; whether these results reflect selective spread remains to be determined and is an area of active interest in which we plan to continue our work. 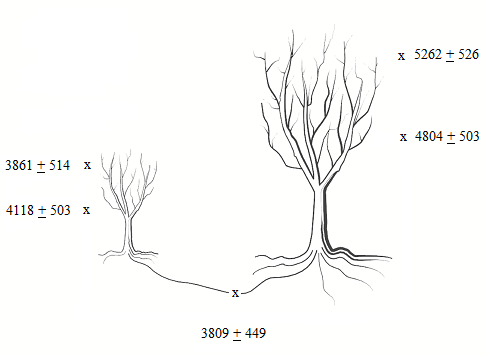 Figure 1. Number of unique amino acid changes within each of 5 tissues within an individual tree and it’s clonally derived offspring.

Surprisingly, the mutational variation observed does not appear to be random as one would expect, given that amino acid changes were over-represented by a subset of genes/gene pathways repeatedly across many tissues within an individual tree (Figure 2). The genes affected by somatic mutation, across all trees and tissues, were over-represented by those involved in 1) apoptosis and the immune response, 2) metabolism and protein binding, 3) reproductive cellular processes and 4) defense responses. Results support the long-standing hypothesis that individuals exist as mosaics of genetic variability and can evolve. 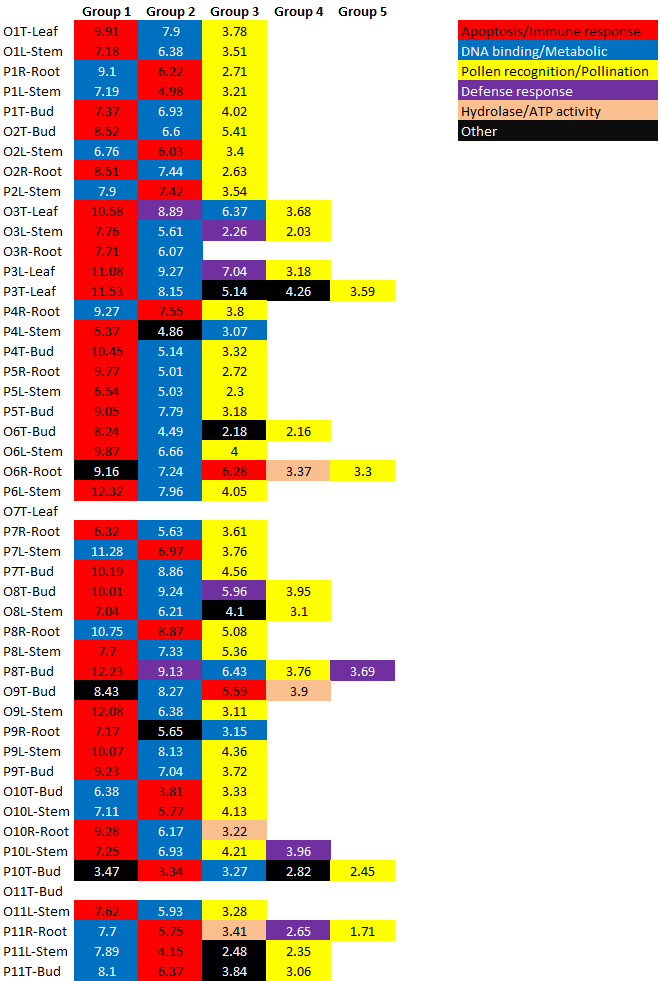 Figure 2. Results from gene ontology (GO) analysis of genes containing a unique amino acid change. Numbers within each color corresponds to the enrichment score obtained for that GO category.

The Role of Endoreduplication in Plant Tolerance/Overcompensation
Overcompensation is defined as an increase in reproductive output following herbivory. The first clear evidence of overcompensation was demonstrated in Ipomopsis aggregata in response to herbivory, where a 3-fold increase in seed yield was observed following the removal of 95% of the total inflorescence biomass of the flowering biennial (Paige and Whitham 1987). While initially controversial, similar results have been reported in numerous other studies and systems, providing substantial evidence that overcompensation does indeed occur in certain situations (e.g. Paige and Whitham 1987, Maschinski and Whitham 1989, Hougen-Eitzman and Rausher 1994, Lowenberg 1994, Nilsson et al. 1996, Lennartson et al. 1997, Mauricio et al. 1997, Weinig et al. 2003).

While the ecology of overcompensation has been studied in much depth, its genetic basis has only begun to be elucidated. Increases in fitness following damage are likely due to the release of apical dominance; the removal of the apical meristem by herbivores eliminates apical auxin production, leading to rapid axillary bud break and subsequent stem elongation which changes plant architecture, increases photosynthetic capacity, and in some cases enhances fitness (e.g. Paige and Whitham 1987). Given that the release of apical dominance likely alters both physiological and genetic processes to maximize rapid regrowth and fitness compensation, recent studies have targeted integrative mechanisms for facilitating rapid regrowth in overcompensating genotypes. Our studies (Siddappaji et al. 2013) used transcriptomic, quantitative trait loci mapping, and candidate gene knockout and complementation methodologies with Arabidopsis thaliana to uncover one key metabolic pathway—the oxidative pentose phosphate pathway (OPPP)—with strong evidence supporting its role in influencing compensation via the action of glucose-6-phosphate dehydrogenase (G6PD1; Scholes et al. 2013, Siddappaji et al 2013). The OPPP is a component of the generalized stress response that synthesizes intermediates from glucose for biosynthesis in the Calvin cycle, the production of secondary defensive compounds, and the production of ribo- and deoxyribonucleotides (Kruger and von Schaewen 2003).

Upon the release of apical dominance by apical meristem damage, nucleotides produced via the OPPP may be used to increase cellular ploidy by endoreduplication. Because auxin maintains a cell’s undifferentiated state, removing the site of apical auxin production triggers axillary cell expansion and differentiation via an exit from mitotic cycles and an entry into endocycles (Ishida et al. 2010). The endocycle is characterized by alternation of DNA synthesis and cellular growth phases, a process termed endoreduplication (Brodsky and Uryvaeva 1977, Nagl 1976). Because of its commonality in eukaryotes, and particularly in angiosperms (Nagl 1976, Sugimoto-Shirasu and Roberts 2003), endoreduplication is suspected to play critical roles in generalized cellular development, namely in cell expansion and differentiation. Endoreduplication achieves this by increasing nuclear ploidy through successive genome replications without cell division, generating “endopolyploidy.” Thus, endoreduplication following the release of apical dominance may promote compensation, or even overcompensation, to damage by mediating lateral growth whereby stem number, biomass, fruit number, and seed yield may increase relative to undamaged plants.

Our recent studies have uncovered correlative evidence implicating endoreduplication in this role—Scholes and Paige (2011) demonstrated for the first time that the induction of endoreduplication following experimental clipping is positively related to fitness compensation following apical damage, where clipped plants of the Columbia-4 genotype experience a 10% increase in endopolyploidy relative to unclipped controls during their regrowth, ultimately producing 40% more seed when damaged than when undamaged (i.e. they overcompensate). Clipped plants of the closely related Landsberg erecta genotype, in contrast, illicit no such increase in ploidy and suffer lower seed yield relative to undamaged plants (Figure 3). The ability to increase cellular ploidy in response to damage is thus ecologically important but genetically constrained—those genotypes that are able to enhance endoreduplication following damage may benefit from increased regrowth and fitness via greater cell volume, metabolism, and transcriptional output due to the exponential increase in the number of genome copies (Nagl 1976, 1978, Barow 2006). 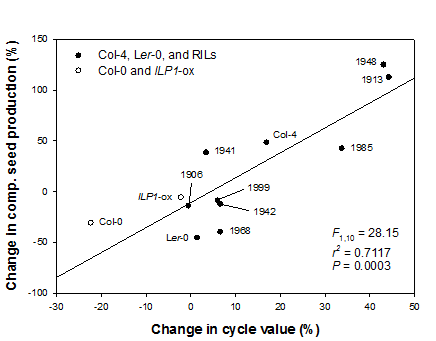 Figure 4. Relationship between fitness compensation and nuclear DNA content. Data from a cross between Columbia and Landsberg erecta generating a suite of RILs with different levels of fitness compensation (% change in seed production per line; clipped – unclipped/unclipped X 100; n = 20 plants per treatment per line) and their % change in nuclear DNA content. Each darkened data point represents a recombinant inbred line (R2=0.735, P=0.002).

More recently and more importantly, we tested whether the experimental manipulation of the endoreduplication genetic pathway caused predictable changes in fitness compensation upon apical damage. By overexpressing an endoreduplication enhancer, INCREASED LEVEL OF POLYPLOIDY1 (ILP1), and comparing its endoreduplication and compensatory responses with its background genotype Columbia-0, an undercompensator, we showed that overexpressing ILP1 improved Columbia-0’s ability to endoreduplicate during regrowth and completely mitigated the otherwise detrimental effects of damage on seed yield and biomass production (Figure 5) (Scholes and Paige 2014). These results suggest that the ability of these plants to increase their cellular ploidy via endoreduplication directly impacts their abilities to compensate for damage, providing a mechanism by which the basis of overcompensation may be resolved. 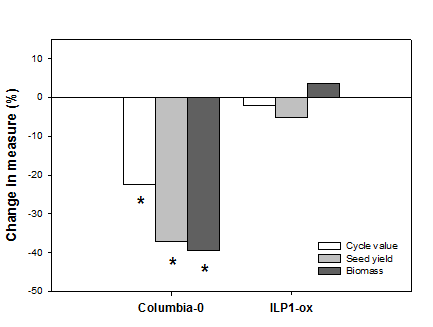