Yesterday evening, Lauren and I took a quick trip to the Basilica Cistern, or, as it’s called here, the Yerebatan Sarayı (sunken palace). The ancient cistern was constructed during the reign of Justinian I, by the labor of a supposed 7,000 slaves. It was used as a water filtration system for hundreds of years.

Today, the cistern is nearly empty of water, so tourists can walk around on platforms suspended over the water. The place is very leaky and damp – I got startled a few times when a big fat drop would fall on my face.

A big tourist draw to the cisterns are the large stone Medusa heads in the underground chamber. Historians don’t know where the heads came from, why they’re there, or why one of the heads is tilted on one side. I couldn’t get a good photo of the whole place because it was so dark. I suppose back in the day, this place would have been incredibly eerie. But on our visit, with 100 kids underfoot, the place was booming with echoes. Regardless, it was cool to visit someplace that was so historic and preserved for generations upon generations. As loyal readers already know, we spent Thursday through Saturday in the Hatay region of southern Turkey, which is in close proximity to the Syrian border. A growing number of refugee camps dot the dusty landscape of Hatay, and the cities, like Antakya, are increasingly full with those who have escaped violence in Syria.

I don’t want to tread on the stories I’m working on too much. Nearly 9,000 Syrians have reportedly perished at the hands of Bashar al-Assad’s forces since last May. People told me stories of brothers, sisters, mothers, fathers and children being slaughtered.

The ones who have survived say they will never be the same.  When we visited the Antakya State Hospital, we talked to people disfigured for life – who say they narrowly escaped death.

A refugee woman who helped us communicate at one of the camps took us to the hospital, where she often volunteers and brings food. The two men we visited suffered tremendous injury in Syria, one said he was injured by a bombing and one from being driven over by an Assad army vehicle during a demonstration. They have both been in the hospital for several months. They told us they were carried over the border mountains on the backs of Free Syrian Army members, then driven to the hospital in Antakya.

I will be writing more about these men and the other refugees I met this weekend, so be sure to look out for those pieces this week!

Walking around the market in Antayka this weekend, my nose stumbled upon a shop, selling an assortment of roasted nuts. After tasting a variety of samples, we settled on a bag of roasted cashews. Then the owner, Ismai, came out to greet us and invited us to a back corner for some tea. Bar none, Turkish hospitality is like no other I’ve experienced. Where ever you go, people will eagerly offer you a cup of tea, insisting on continuously refilling it. It takes about three cups to become best friends with someone here! Enjoying our tea and roasted nuts with Ismail, I learned that he has been in the nut industry for quite a while. He first started out by himself, pushing a little cart up and down the streets selling nuts. Now, fifteen years later, he owns his own nut roasting company, and ships to many different cities across Turkey.

His business is in Antayka, the Hatay region, which is close to the border with Syria. Currently there are four Syrian refugee camps located in the Southeast region of Turkey. While some of the shopkeepers have been hit hard during the turmoil in Syria, because it’s harder for people to cross back and forth over the border, Ismail said he hasn’t experienced the same loss of business as others.

Several shopkeepers report  their profits drastically declined because Syrian customers aren’t able to frequent them anymore. But, when talking with these various shop owners, there was one theme in common–empathy. They all expressed in some way that even if their businesses took a hit from the Syrian conflict, the most important issue for them was their Syrian brothers and sisters, as they affectionately referred to them. They displayed such humanity and concern for those across the border who are dealing with violence almost daily. 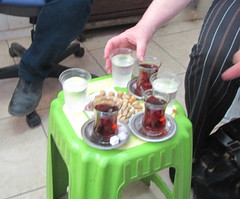 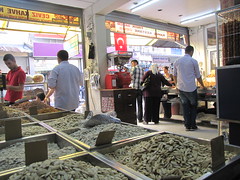 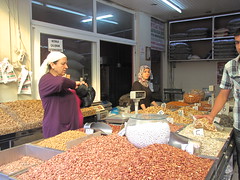 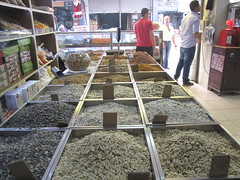 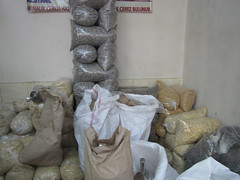 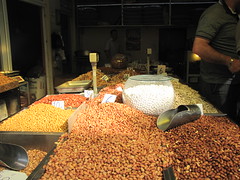 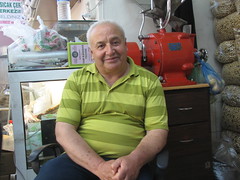 Who would have thought that there were still single communities with 20 people. Coming from a huge city like Chicago, I was baffled at the thought that a beautiful and very small village of Kadriye could consist of so few. However within the limits of this small town, they had everything: water, shelter, a mosque, a lot of love, their family and great food. Things are simple, and it seems that they love it that way. The village was within the limits of Koceili, a section of Turkey with many provinces and undergoing fortification of its water systems, and surrounding areas. However, the only fortification that this village may see is of the earth’s natural doing. We arrived in the village and we were charmed by its character. The houses, though sometimes damaged, had amazing life and one could tell that there was history within every wall. One of our hosts from the village was so hospitable that he roasted a fresh lamb for us. We paired the meat with great tasting vegetables. The lamb and veggies were totally organic and were derived from the local area. We also tried fresh strawberries right out of his garden. The were a bright beautiful red, with a taste of freshness the blew you away.  Another breath taking element of this experience was the scenic views. This village was very close to the top of one of the Samanli mountain, and the rolling hills beneath and near it were astonishing. Why can’t life always be this simple. Our host had a son whom he obviously loved very much, and it seemed like they were happy living life in a place where they could trust every thing they eat and everyone they see. There were no strangers there. Even though we entered as visitors, we felt as though we left as family. We went on a tour of the Bosphorus this afternoon with Dr. Ercan Balci’s class of University of Illinois students who are also in Istanbul this month. Though we had some soggy weather, we got to see the stretches of Bosphorus coast that are usually difficult to reach – Istanbul traffic can be very heavy!

Some of the architectural standouts we saw were the yalıs – pronounced “Yah-luhs” – which are waterside wooden residences. There are roughly 600 of these primarily 19-century homes, painted in any and every color. Dr. Balci explained that though many are owned by wealthy families, there are many that are shared by several owners. Since the homes are so expensive, owners will try to sell their share of a residence but face difficulty when these multiple owners squabble over who the home will be sold to and how much it will be sold for. This often forces people to remain living in these fabulously expensive homes while they’re living in relative poverty.

Another difficulty these homeowners face is in the upkeep. Since many of the homes are considered to be historic buildings by the country, there are laws about how the homes must be remodeled and restored. Since these particular restorations are often quite expensive and unaffordable, some of the homes fall into disrepair. I have yet to come across an unfriendly Turk. The Turkish people have been nothing but hospitable to us while on this trip, and I have realized that it’s not because we are foreigners, but because it is a part of their culture. From the poorest to the wealthiest, the Turkish people will go out of their way to make you feel welcomed.

Numerous times I’ve stopped people on the street to ask them for directions and in every instance they have either shown me the way or, if they don’t understand English, have searched for someone who does to help me. The surprising thing is that they don’t expect anything in return, they are genuinely doing this out of the kindness of their heart…they just want to make you happy and at ease.

Another thing I have noticed is, much like in the Arab culture, the Turks are constantly offering you coffee, tea, juice, or water. Today we had a meeting with the Deputy Mayor of Kocaeli. When we first arrived we were asked what we would like to drink from the choices of Turkish coffee, Turkish tea, water, and pomegranate juice. These are standard selections offered when you’re a guest. Don’t be surprised if you’re even offered these selections while shopping in a store.

As journalists in Turkey, wherever we go we seem to always have a notebook, a pen, a camera…and Turkish drink with us. In just 3 weeks the students at the Istanbul Moda Academy will be showcasing their hard work at the Istanbul Fashion Show. Dilek Ozturk, a student studying at the University explains how and she and her fellow students have been preparing their designs. One of the students is still completing the stitching on a black blazer that is part of her collection to be showcased. Gizem Kuguk said her inspiration for this collection was the theme of suffering. She researches images and channels the emotions she feels when viewing them into her clothing designs. She said she uses utilitarian shapes of the 40s to help express the idea of being in a cage. “With the idea of a cage, suffering is endless, you can’t escape it, there’s no cure,” said Kuguk. Located in the chic neighborhood of Nişantaşı, the Istanbul Moda Academy is housed in a 19th century mansion, that suffered a great fire in 1988, and has been housing the fashion academy since 2007. If you like a good strong cup of coffee in the morning for your daily caffeine dose, Turkish coffee doesn’t disappoint. Chock full of aromas and flavors, Turkish coffee is made from finely ground beans, that are boiled in an open pot known as a cezve, traditionally made out of copper. Sugar is added for desired sweetness, along with other optional spices such as cardamom. The mixture is brought to a boil, allowing for a thin layer of foam to develop. The coffee is sometimes put on reduced heat and brought to a boil two or three additional times to achieve a thick layer of foam–the success of a well-prepared cup of Turkish coffee. Finally the coffee is served steeping hot, poured into small, espresso like cups. There is a thin layer of sludgy grounds that remain at the bottom of the cup. If you’re superstitious you can pour your cup upside down over the saucer and read your fortune in the pattern of the grounds. And there is no better way to enjoy Turkish coffee than with Turkish delight! This traditional sweet comes in a variety of flavors, typically made with chopped dates, pistachios and hazelnuts or walnuts. The ingredients are bound together by a molasses gel, and then dusted with powdered sugar. While this is the traditional version, many variations of this delicious sweet exist featuring marshmallows, chocolate and coconut!