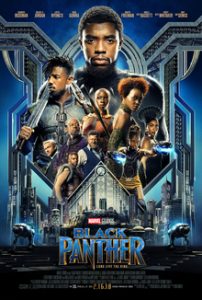 For months now, people have been raving about Marvel’s Black Panther movie. It has received some criticism, but also overwhelming support and love from people all over the world.

Marvel produces superhero movies that are fascinating to watch, and sometimes have brief historical and realistic components, but this is the first time when fiction and reality combine in this specific way. Not only is this movie a first of its kind, with an almost entirely black cast, but it sets out to provide its viewers with a connection. For the first time, there is a black superhero who takes center stage. And although this story is based in fantasy, the filmmakers took the opportunity to fuse fantasy with real African concepts, cultures, and histories.

Wakanda is a fictitious Central East African nation that has not yet been discovered, let alone exploited by outside colonizers. It directly counters many common perceptions of Africa as being a dark, poor continent. Chimamanda Ngozi Adichie, a Nigerian author, comes to mind when considering this perception and “the danger of a single story”. In reality, however, Africa is so much more. It is a continent rich in so many ways, and equally rich in diversity. This movie provides some insight into the diversity that is present throughout the continent, while it can also be seen as promoting a sense of identity, a sense of pan-Africanism. 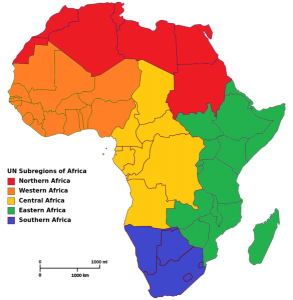 A map of regions in Africa

One of the most visually exciting components of this movie is the fashion. Ruth E. Carter was the costume designer for the film, and she created a combination of traditional African attire with hi-tech Afropunk influences. Carter had the goal of creating attire for a fictional African nation that was completely original, but that also represented and honored both African history and African-American history. She took several trips to Africa and drew inspiration from those visits. Some of her specific inspiration came from the Dogon people of West Africa, the Turkana people in East Africa, the Hemba people in Congo, the Suri tribe in Ethiopia, the Tuareg people in Western and Northern Africa, along with several others, totaling over 10 different tribes and groups of people from throughout the continent (Giles, 2018). She combined these inspirations with an Afro-futuristic edge to create the original attire for the film. Check out a brief red carpet interview with Carter here when she talks about some of her favorite inspirations:

Throughout the film, characters are sometimes seen speaking to each other in another language. What is even more interesting, however, is the fact that this is a real African language. The filmmakers decided to incorporate isiXhosa, a South African language with over eight million native speakers, into the story line (Eligon, 2018). This language was not chosen at random, but was suggested by one of the actors in the film. John Kani, who plays T’Chaka, the father of T’Challa, in the film, is a native of the Eastern Cape in South Africa, and a native isiXhosa speaker. He suggested that the directors should incorporate some isiXhosa into the film’s dialogue to increase the African authenticity of the film. The filmmakers loved the idea, and the film’s director, Ryan Coogler, “wanted to make it a priority to use Xhosa as much as possible” throughout the film (Eligon, 2018). The usage of isiXhosa, however, was not random or sporadic throughout the film, but rather was strategically used during what would be considered natural or authentic situations. An example of this would be when two Wakandan characters wanted to discuss something privately but were in the presence of an outsider. The language itself is very difficult to learn, and because none of the cast were native speakers of isiXhosa, the filmmakers hired several dialect coaches, including Mr. Kani and his son. If you’re interested in hearing a bit about the pronunciation of isiXhosa, check out this video:

This film has definitely paved the way for new narratives about Africa. It has inspired viewers to consider more than a single story, and has increased pride for African culture, language, and history.

Giles, Chris. (2018, February 19). A journey into Wakanda: How we made Black Panther. CNN. Retrieved from https://www.cnn.com/2018/02/16/africa/black-panther-behind-the-scenes-marvel/index.html.