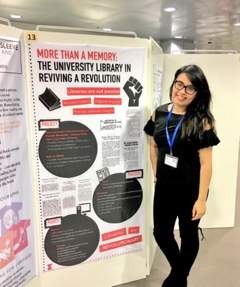 Zohra Saulat with her poster at BOBCATSSS 2018

When I decided to pursue librarianship, I did not imagine that it would take me across the world. Just a few short weeks ago I had the opportunity to present one of my projects in Riga, Latvia for the 2018 BOBCATSSS symposium. Not only was this my first ever library conference, but this was the first time I traveled to Europe. The experience itself was exciting, but I was also thrilled to share my project, which had its start on campus at the International and Area Studies Library. 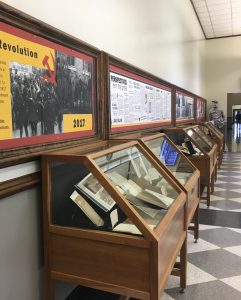 The exhibit about the Russian Revolution was on display in the main library for the month of September 2017.

This past summer, I assisted with IAS’ Slavic Summer Research Laboratory (SRL). Since 2017 marked the 100th anniversary of Russia’s Revolution, one of my duties to was to help create a banner that would accompany a library exhibit commemorating the historical event. The library exhibit featured memoirs and artifacts from the library’s Slavic collection as well as from the University Archives. My specific task was to survey how historical English language newspapers around the world were reporting on the events of the Russian Revolution. I used both microfilm copies as well as digitized newspapers. 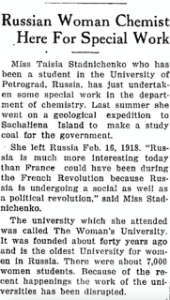 Screenshot of a Daily Illini article about a Russian chemist

Using the Illinois Digital Newspaper Collections, I started local and looked to see if the Daily Illini was reporting on the Revolution in 1917. I was pleased to find a few articles that featured the Russian Revolution. One was of Illinois faculty member Dr. Simon Litman giving a series of lectures. Another was of a student, who was also a refugee from Russia, as well as a library worker, who also gave a talk on the events of the revolution. Another was a brief feature on a female Russian chemist who was continuing her studies on campus since all universities in Russia were closed at the time of the Revolution.

I further expanded my search to American newspapers such as the Chicago Tribune as well as international newspapers Sunday Times of London, Times of India, and the North China Herald.  It was especially interesting to see how oppressed groups were reporting on this particular Revolution. In all the newspapers I examined,I realized that there seemed to be a lot of information circulating regarding the Russian Revolution. There was indeed a lot of buzz as well as philosophical musings, but I noticed there was also a trend of rectifying supposed misinformation. Take the highlighted Daily Illini newspaper articles as examples. The events on campus were designed to refute certain information and present what the revolution was supposedly really like. This makes sense; In a time of war and political upheaval especially, not only is there information overload, but also misinformation. 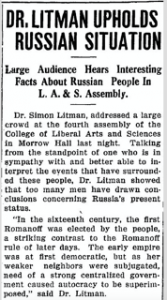 Screenshot of a Daily Illini article about Dr. Simon Litman

Newspapers provide a fascinating historical insight. In 2018, whether a news article or a tweet (presidential or personal), a lot of information is found and preserved online. But 100 years ago, newspapers were the go-to for current information. If you are interested, be sure to check out the library guide on using newspapers as primary sources, also listed at the end of this post.

As someone who studied history in undergrad, I naturally enjoyed the nature of this project. But my favorite aspect was seeing its progression: that is,  the process from start to finish, and the collaboration with a variety of experts and specialized departments to put together an exhibit for public consumption. These resources –  whether digitized online or preserved as physical copies – are waiting to see the light of day once again. Libraries contain such valuable information. Often it takes the conscious efforts of a team of librarians and archivists to revive a revolution. I may be a little biased, but libraries truly are remarkable. 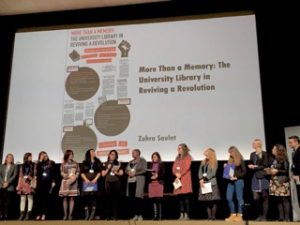