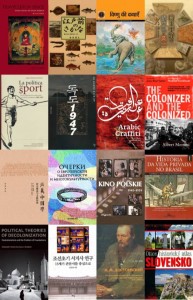 Friday afternoon, April 10, the International and Area Studies Library (IAS) hosted “Embracing Internationalization at the University Library:  Global Impact of Collections, Services and Expertise.” The event aimed to recognize the ways in which several members of and units in the University Library system support and create opportunities to serve an increasingly globalized patronage. Dean of Libraries and University Librarian John Wilkin opened the gathering by introducing the guest of honor, Dr. Reitumetse (ray-too-met-see) Obakeng Mabokela, the university’s Vice Provost for International Affairs and Global Studies. In her opening remarks, Dr. Mabokela shared that her experience as an international student began on the University of Illinois campus some two decades ago. She is originally from South Africa, and having worked in higher education for more than 15 years, she emphasized the importance of grooming graduates who are globally minded and can work both comfortably and competently all over the world. This goal became even more compelling in light of the fact that the U of I enrolls nearly 10,000 international students per year, a figure among the highest in the nation. 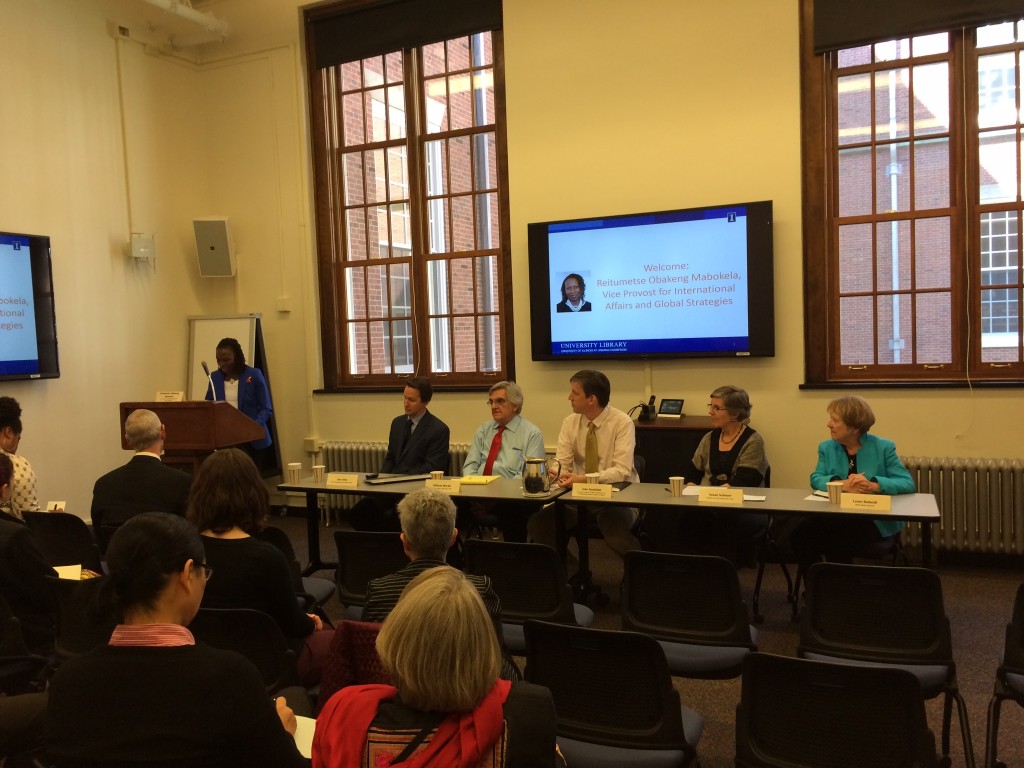 Following Dr. Mabokela’s remarks, the audience, which was comprised of various workers from the library system, heard from a select panel whose work and current projects meet the library’s mission to further internationalize U of I collections, collaborations and curricula. Head of the International and Area Studies Library Steve Witt highlighted the U of I’s Slavic Reference Service that is active and highly valued both domestically and abroad, receiving 3,000 reference questions per year. William Mischo, the Head of the Grainger Engineering Library, spoke of the International Institute for Carbon-Neutral Energy Research (I2CNER) which aims to facilitate technology transfer across the globe. The Associate Professor and Director of Undergraduate Studies in History Dr. John Randolph promoted the strong tradition of interdisciplinarity supported on campus as demonstrated by the Summer Research Laboratory. Assistant Director of the Mortenson Center Susan Schnuer described the center’s signature Associates’ Program which annually invites librarians from all corners of the world to meet, train and network together. And Global Studies Librarian Lynn Rudasill introduced the audience to the World Sustainable Development Web Archive, an initiative that aims to allow users to examine websites that may no longer be live. 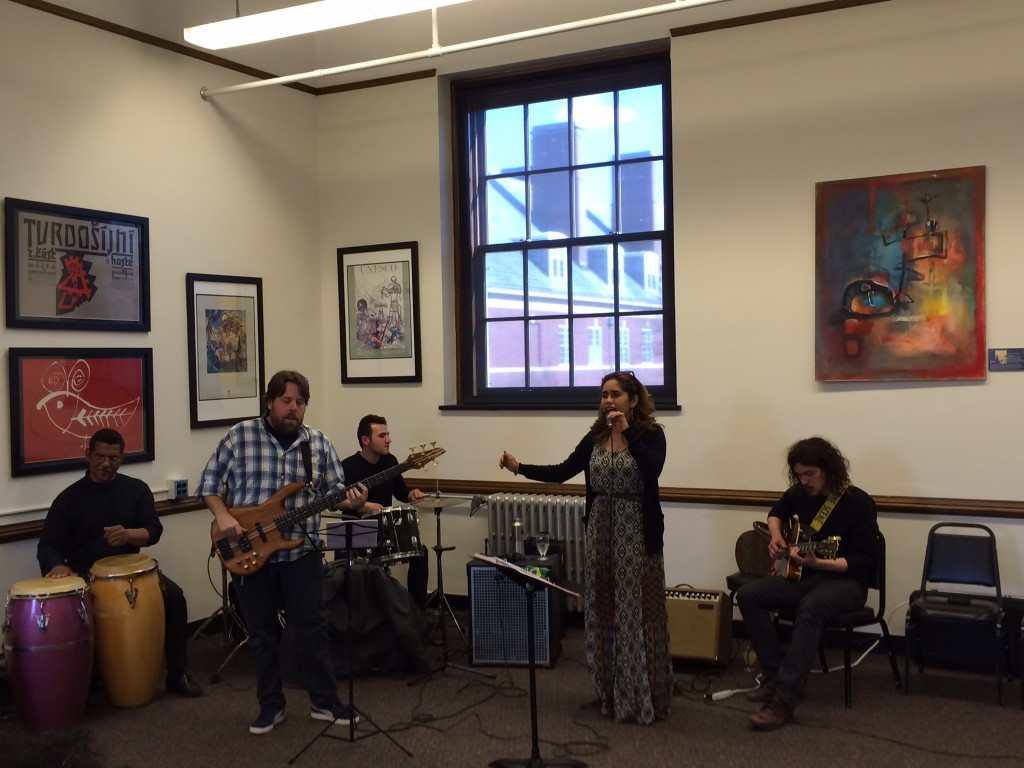 After the panelists’ remarks, the meeting was followed by a warm and lively reception in the IAS Library which allowed for all in attendance to discuss their projects and to casually commune. Popular Brazilian covers were played by local band Desafinado and lead singer Elis Artz who works for the university’s Lemann Institute for Brazilian Studies. Caterers served authentic Brazilian hors d’oeuvres including marinated hearts of palm, pão de queijo (a Brazilian cheese bread) and chocolate truffles. Ultimately, the event effectively showcased the University Library’s commitment to embracing internationalization and how we support the collective mission of serving an increasingly globalized public. For more events and updates like these, follow us on the IAS Facebook page and visit us in the Main Library Room 321. 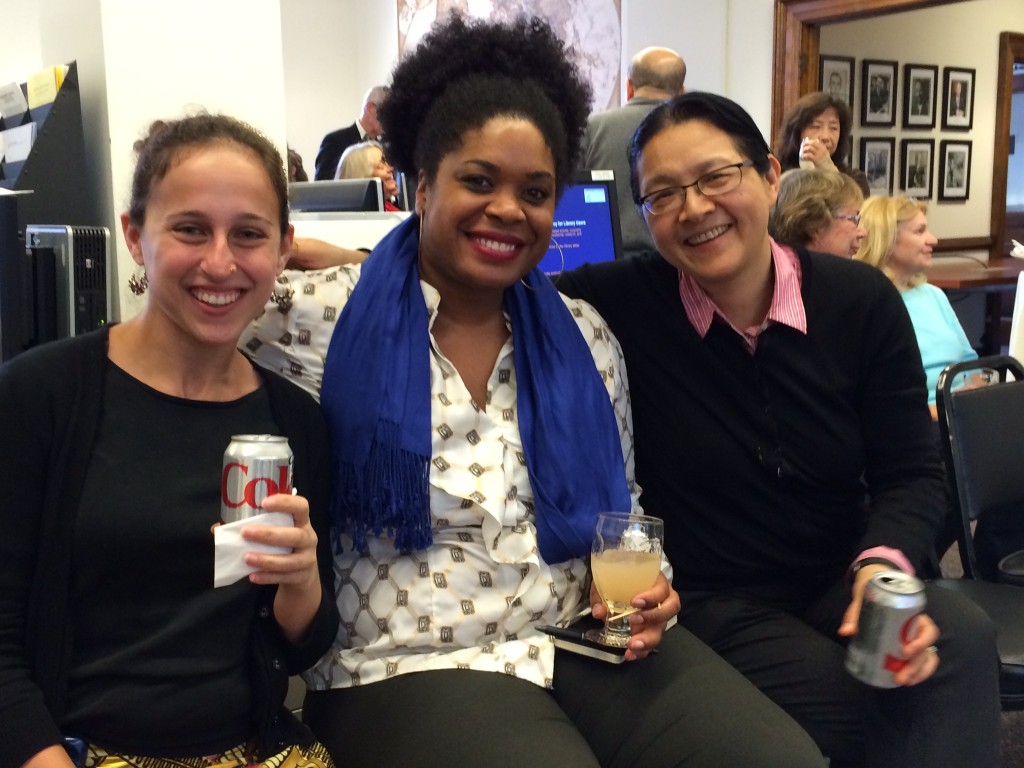