Following a growing trend of digital portal libraries, the Digital Public Library of America (DPLA) website launched in April 2013. The Berkman Center for Internet & Society at Harvard University leads this ambitious project, which was sparked by an October 2012 meeting of forty leaders from libraries, foundations, academia, and technology projects. Starting from 2011, the Berkman Center took a two-year period to bring together hundreds of public and research librarians, innovators, digital humanists, and other volunteers helped to scope, design, and construct the DPLA. The project aims to collaborate online resources to create “an open, distributed network of comprehensive online resources that would draw on the nation’s living heritage from libraries, universities, archives, and museums in order to educate, inform, and empower everyone in current and future  generations.”[2]

The freshly initiated DPLA project has a larger than 2 million collection contributed by 18 American archives, libraries, museums, and cultural heritage institutions to provide free access to students, teachers, scholars, and the public. They are hoping to get more partners as the project grows along.

DPLA is also features an innovative search portal. The portal provides special features like a map, a timeline, and several apps to improve discovery and creation. The map function shows the locations of items from a search request if the metadata records provide the location information. The timeline allows users to visually browse search results by year or decade. And the apps provide access to applications and tools created by external developers using DPLA’s open data. Thus, users of the Digital Public Library of America can create their own apps to browse the collection. These new features make DPLA more intuitive and visual.

In addition to its innovative display of search results, DPLA also creates a nationwide hub program: DPLA Digital Hubs Program. This network is supported by its more than forty state and regional digital libraries with their collections and services. These partners share their 250,000 metadata records resolving to digital objects, including online texts, photographs, manuscript materials, art work, etc. They also maintain and edit these records to keep them up to date. Furthermore, these state or regional digital libraries also offer their state or regional partners standardized digital services, ranging from digitization, metadata creation data aggregation and and storage. They also promote the digital collections locally to bring in more local users.

The University of Illinois Library is part of this new initiative. We have contributed more than 16,000 items and metadata for 15 of our digital collections to the DPLA, including the Motley Collection of Theatre and Costume Design, Portraits of Actors, 1720-1920, Historical Maps Online, and the Sousa Archives Music Instrument Digital Image Library.  We are also one of the content hubs. We hope to contribute more in the future. DPLA gives both our library and the users more accessibility to share our collection. If you want more information of this project, please check their website at http://dp.la/.

Update: On June 18, 2013, the HathiTrust partnered with the DPLA “to expand discovery and use of HathiTrust’s public domain and other openly available content.”[5]

The European Library (which Christina John posted about in January 2013): http://www.theeuropeanlibrary.org/tel4/

In November of 2008 the European Union unveiled the European Library, a digital repository to preserve and make accessible Europe’s multitude of cultural materials.  Like all libraries big and small the European Library strives to provide free and open access to information for individuals all over the world. However, examining how the European Library obtained support and funding from EU officials reveals that digital libraries and the digitized items that they hold can be of immense political and historical significance.

An all access web portal, the European Library has a single search box which enables users to freely search for resources within the online catalog systems of “Europe’s leading national and research libraries.”[1] The online library provides users with free access to over 200 million bibliographic records and resources of which include artwork, maps, manuscripts, photos, films, and books from all over Europe.

A screen shot of the European Library homepage.

Why Does This Matter?

The European Library has evolved from a number of earlier library projects such as GABRIEL (Gateway and Bridge to Europe’s National Libraries) or TEL (The European Library). For years EU officials, while sympathetic and admiring of the idea behind the European Library, did not support the digitization project on the grounds that it was too expensive and that resources for the preservation of European culture would be better allocated elsewhere.  However, in 2005 Google announced the Google Books Project  which works to digitize works from America’s top libraries in order to make them freely available to the public. With Google’s announcement came immediate concern from “EU officials and cultural commentators” who voiced “that Google’s ambitious plans could result in important European literary works missing out and being lost to future generations.”[2] In fact, head of the French National Library from 2002-2007, Jean-Noel Jeanneney, claimed “Google’s plans could lead to a US-centric record of great literary and cultural heritage, neglecting diverse works in different languages.”[3]

Jeanneney’s concern for the implications of Google’s digitization are articulated in his book Google and the Myth of Universal Knowledge: A View From Europe. Indeed Jeanneney’s writing and criticisms give voice to an important issue that arises during the digitization process: what do we choose to digitize? This is an important question that libraries, cultural institutions, and corporate donors are facing.  Digitization projects are costly, time consuming, and labor intensive and it is inevitable that not every item in a library collection can be digitized. Nevertheless it is important to pay attention to the selection and funding processes that affect which items are chosen for digitization.

An image of Jean-Noel Jeanneney, former president of the French National Library (2002-2007), who helped raise support for the European Library.

Books, paintings, maps, and other cultural resources that are digitized can be made available over the Internet and therefore spread to anyone individual who has access to a computer. And because of the increasing use of computers and technology to transmit information the digitization of cultural materials, though not a perfect solution is powerful in that it provides institutions with the opportunity to make their collections more accessible to the world. Thus institutions that do (or can afford to) digitize their materials are in a powerful position to affect the historical memory for researchers of the future. For what we choose to digitize and make accessible today will be what digital library users of the future consider history. It is an important issue with serious historical and even political ramifications.

After Google’s Book Project announcement support and funding for the European Library began to grow amongst EU officials signifying that perhaps they do understand the ramifications of digitization and how it can affect the historical record. Next time you use a digital library like the European Library, or the Afghanistan Digital Library, or read a digitized book off of Google Books think about what sorts of books, artwork, and other items of cultural worth did not get digitized and what that could mean for the future.

Libraries are important cultural institutions that work to not only provide universal access to information and knowledge, but also preserve the cultural heritage and identity of the communities they serve. National libraries such as the United States’ Library of Congress or Spain’s Biblioteca Nacional de España work to achieve these objectives on a national scale.

Now, imagine the United States without the Library of Congress or the National Archives? What would happen to the Constitution? The Declaration of Independence? Or even the papers of our past Presidents? These materials are vital to understanding the values and tenants that shape our national past and future.

Unfortunately, the people of Afghanistan face this very issue. Decades of conflict have decimated the Kabul University Library, which also served as Afghanistan’s National Library.

An article written by Abdul Rasoul Rahin, a former director of the Kabul University Library, describes the once impressive holdings of the library. The Kabul University library held “200,000 books, 5,000 manuscripts, 10,000 books on Afghanistan Studies, 10,000 bound volumes of periodicals, 3,000 rare books, 10,000 electronic materials, 2,000 photo albums, 5,000 calligraphic specimens, and a strong collection of national archival and documentary materials.”[1] Like libraries all over the world the Kabul University Library worked to collect, preserve, and make accessible these valuable informational and cultural materials for the people of Afghanistan.

Sadly, the Afghanistan Civil War and other international conflicts have left the nation of Afghanistan in a state of turmoil since 1978. Since that time the materials of the Kabul University Library and other Afghani cultural institutions have been dispersed clandestinely over the black market or destroyed by fire and neglect. In the 1990s alone, “tens of thousands of books in both the Kabul Public Library and the Kabul University Library were destroyed under Taliban rule.”[2]

While conflicts continue to occur, positive efforts such as the Afghanistan Digital Library are working to both rebuild the libraries of Afghanistan and also preserve surviving Afghani collections and materials. A project of the New York University Libraries and supported by the National Endowment for the Humanities the Afghanistan Digital Library works with public institutions in Afghanistan and private collectors throughout the world in order to collect, catalog, digitize, and make available over the internet as many Afghan publications from the periods of 1871-1930, the earliest period of publishing in Afghanistan. Digitized materials will include rare books, historic photographs, newspapers, government documents, and journals.

In doing this the Afghanistan Digital Library will not only help in the process of “constructing a national bibliography for the country,” but also “reconstruct an essential part of Afghanistan’s cultural heritage.”[3] Most importantly however, the project will help bring the contents of Afghanistan’s history back into the hands of its people. 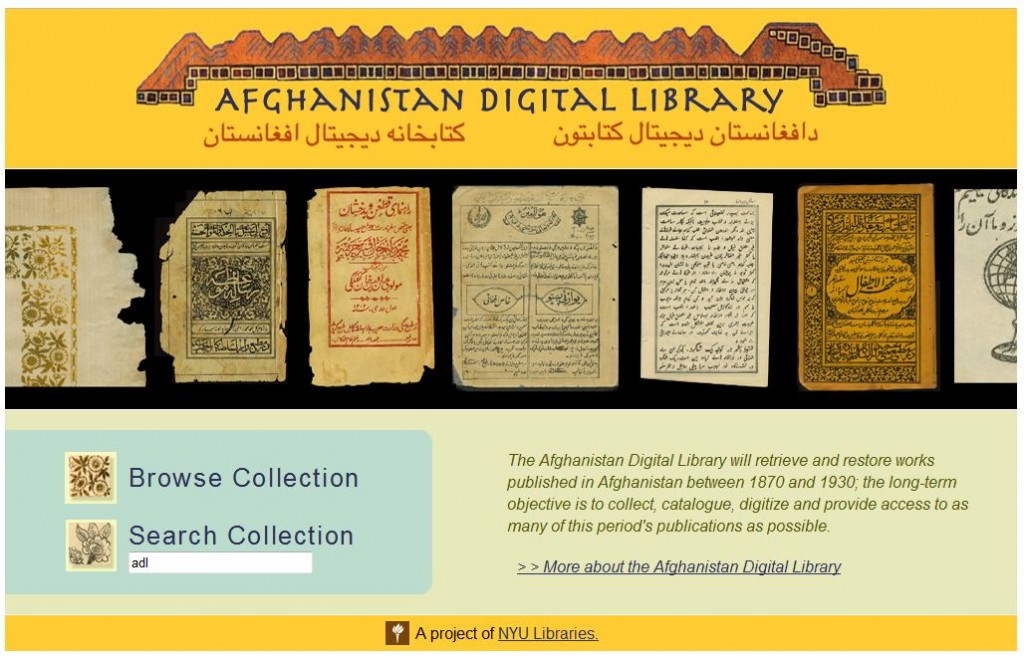 To visit and explore the Afghanistan Digital Library please click the link here.