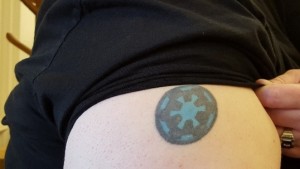 ely blowing two summers on Tie Fighter, a flight simulator game that allowed you to fly for the Empire. I could beat the game on expert, getting every medal including acing the extra missions. My love of the Empire, and the game in particular, would lead to my Star Wars tattoo (see tattoo of the symbol for the Empire to the left).  When people ask, do I love Star Wars or Star Trek, my answer is yes. I’ve been a fan of both since I was a small child. They both tell narratives that are timeless and have cross cultural appeal.

There is something about the story of coming of age, falling, and resurrecting that is timeless. George Lucas knew what he was doing when he penned the original screenplays as he consulted Joseph Campbell, of Hero with a Thousand Faces fame, heavily. When the three prequels (The Phantom Menace, Attack of the Clones, and Revenge of the Sith) were released, I greeted them with great joy, only to be disappointed by how bad they were. They were deeply childish and fraught with racism. It is with great trepidation that I greeted the news of The Force Awakens (TFA), a sequel to the first six films. TFA picks up thirty years after Return of the Jedi.  Luke, Han, Leia and everyone else are much older now and the next generation of heroes and villains are poised to take over the story from the originals. While there is trepidation in my heart, the fact that TFA is being directed by J.J. Abrams gives me hope. Abrams is one of the best guys in the entertainment industry right now and if anyone could do a good job of rebooting the Star Wars franchise, it would be him.

As Star Wars mania hits a frenzied crescendo, including Nelson’s Column in Trafalgar Square in London beind decorated as a lightsaber, I haven’t purchased a ticket for opening night. Personally, though my love of Star Wars is literally inked into my skin, I don’t want to battle the crowds. Besides, my local movie house tells me that they are sold out for Thursday and Friday already. I would really like to see the film opening weekend though and I might try to go during the day on Saturday or Sunday. The world over, the love of Star Wars, even before TFA, has always been present. You have no further to look than Australia declaring “Jedi” to be a nationally recognized religion, or a Stormtrooper dancing in Tokyo, or the international 501st Legion (a fan based cosplay group that had its origins in creating Stormtrooper armor), or Star Wars themed weddings and funerals. Closer to home, the Star Wars mania manifests in my own family in a variety of ways including decorating cookies with a young cousin a few years ago who was humming “Jingle Bells” and when I hummed a few bars to the “Imperial March”, he immediately switched over without realizing it, much to the delight of everyone at the table. For me, it’s Star Wars Legos. I have dozens of sets, including the Death Star playset which was my graduation present to myself when I got my Masters in Science in Information from the University of Michigan.

In my many travels around the world, I’ve always found Star Wars fans, even when we didn’t speak the same language, all I had to do was raise my sleeve and show them my tattoo and there was an instant connection that transcended cultural barriers. That transcendence is one of the reasons that I, and so many others, love Star Wars. I’d say the iconography is the other reason. Many fans instantly recognize any shot in any film that looks like the throne room scene at the end of A New Hope. The image is iconic, though not many people realize that Lucas was mirroring the work of Leni Reifenstahl, the brilliant Nazi propaganda director who directed the infamous Triumph of the Will. The in jokes and controversies are another reason to love Star Wars, including Yodaisms and yes, Han shot first. 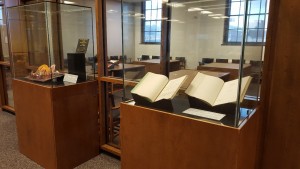 Want to know more about Star Wars? The University Library has a whole host of books and films about the entire franchise, just check the catalog! The Rare Book and Manuscript Library also currently has a small exhibit to commemorate the new film, including a manuscript from A New Hope that proves definitively that Han shot first. The exhibit is up for a short time and will be taken down on December 23rd 2015.