Many scholars and poetry lovers rightly believe that Czesław Miłosz (1911-2004) is one of the most respected contemporary poets in the world and certainly the most distinguished figure in 20th-century Polish literature.  According to Seamus Heaney, Miłosz, who was awarded the Nobel Prize for Literature in 1980, created “a unique voice [italics mine]” through his poetry, “a poetry cargoed with a density of experience that has been lived and radiated by an understanding that has rendered it symbolic.”[1]

Miłosz established himself figuratively as a vital and distinctive poetic voice, but one may wonder what his human “poetic” voice was really like.  The best way to find out is to listen to the recording of his poetry performed by the poet himself, which brings us to the topic of this post.

The UIUC Department of Slavic Languages and Literatures Professor George Gasyna has recently come across the tape that included the recording of Miłosz’s readings of his poetry.  In terms of provenance, the “Miłosz tape” most likely came from the late Professor Stephen Hill who for many years taught Slavic literature at the UIUC and nurtured a passion for Polish poetry, cinema, and theatre.  The tape has been digitized by the UIUC Library Preservation Services (thanks to Cristina Kühn, Media Preservation and Digital Reformatting Project Manager) and is currently available for downloading at: https://uofi.box.com/s/1yr7x1iqg62wwd16a5im6hs4s259fg2d

Of course, the question that needs to be further investigated is whether the tape represents an amateur recording of Miłosz reading his poetry in a classroom, at a lecture hall, or at a poetry recital.  At this point, it is impossible to state unequivocally that the tape had been recorded privately.  It should be noted that there is neither audience applause nor a sign of audience participation on the recording.   However, there is no evidence (on the tape itself and on the case) that the recording had been done commercially or that it had been copied from another recording (such as a radio broadcast, a vinyl record, or a commercial tape, etc.).  The only thing that is preserved with the tape is a typed list of poems read by Miłosz.  Moreover, there is no date of the recording, but it may be a good guess to place the recording in the 1970s or 1980s (when magnetic recording tapes were widely used).

The poems come from two volumes, Ocalenie (Rescue), first published in 1945, and Światło dzienne (Daylight), first published in 1953.  Miłosz’s deep voice oscillates between melancholy and indignation, sometimes turning into fury.  It is a real treat to hear him reciting his own poetry while different images come to life as if conjured by the poet himself.  And the beauty of his voice is enriched by the melodic accent of the kresy (the Polish-Lithuanian borderlands where he came from).

Thanks to Professor Gasyna and the UIUC Library the poet’s voice has been rediscovered and has been preserved for generations of students, scholars, and poetry enthusiasts. 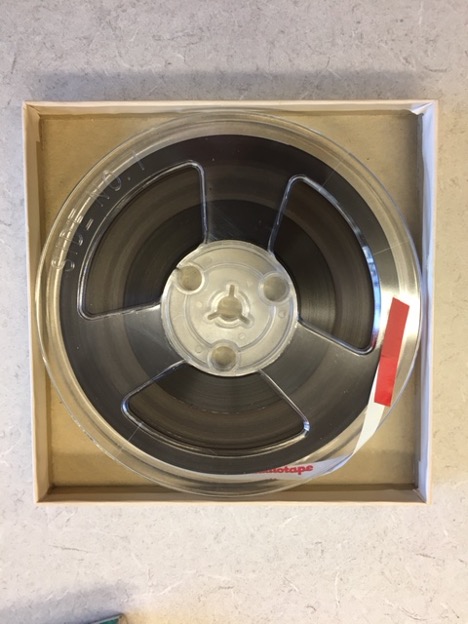 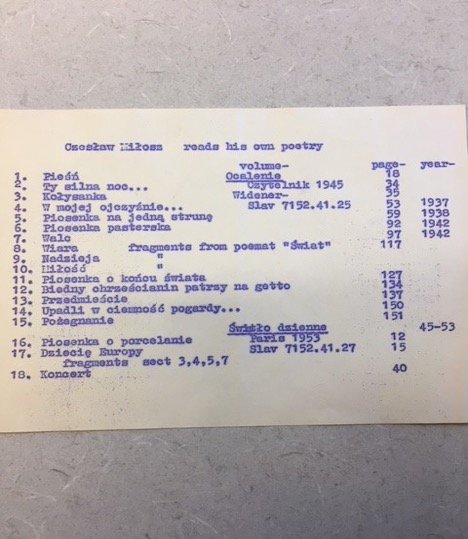 If you would like to find out more about the recordings of key Polish poets check out The Sound of Modern Polish Poetry by Aleksandra Kremer, Associate Professor of Slavic Languages and Literatures at Harvard University.