Have you ever seen a Georgian film? In a 1998 New York Times profile of filmmaker Nana Jorjadze (also transliterated as Djordjadze), critic Stephen Kinzer describes the long tradition of Georgian cinema as founded on “surrealism and poetic intensity.” Its history dates back to 1908, with the release of the several short films, and the first feature-length film, a documentary, was released in 1912. Over the years, many Georgian films, including several by Ms. Jorjadze, have received international accolades and this tradition carries on into the present day.

If you’re learning Georgian or just interested in learning more about the country’s rich cinema tradition, Geocinema.ge is an indispensable resource. The project, maintained by the Georgian National Filmography, makes the rich history of Georgian cinema available online. Through the online portal, you can find information about the 100+ years of Georgian film history, and find information of films released between 1912 and today. The database can be browsed by year, film title, or artists (including directors, actors, and producers). The amount of detail provided about each film varies. While some records contain detailed plot synopses, other entries are more sparse and provide only the basic bibliographical information about a film: title, director, year of release, and film studio.

Geocinema.ge is available through both a Georgian- and an English-language interface. It is clear from the homepage that the English version of the site is still a work-in-progress and some information, including a short essay on the history of Georgian cinema, is only available in through the Georgian interface. Unfortunately, the search functionality in the English-language interface is limited and browsing the site can be unintuitive. For example, to browse the list of films, you must navigate to the Films tab, select the attribute of your choice (title, director, etc.), and then click on a letter of the alphabet in order to generate a results list. 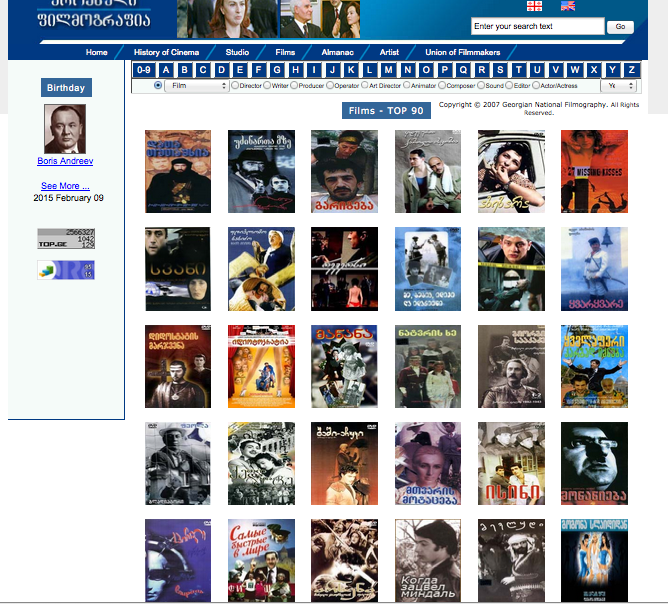 Browse the history of Georgian cinema at Geocinema.ge.

Despite some of its design flaws, Geocinema.ge is fantastic resource for anyone interested in learning more about the rich tradition of Georgian film. The best feature of the site is that many of the films are available for streaming online – just keep an eye out for the camera icon! Many, but not all, of the films have English subtitles. Unsure of where to start? The default setting when browsing displays the Top 90 Films.

If you want to learn more about Georgia, see our Guide to Georgian Bibliography for information about some helpful resources. On the other hand, if you are curious about finding other foreign films at the University of Illinois Library, see our Glocal Notes post from September 2012 about How to Browse Non-English Language Movies in the Online Catalog. If you’re looking for something specific, get in touch with subject specialist for your region and we’ll help you track it down.

Do you have a new favorite Georgian film? What resources do you turn to when looking for foreign-language movies? Let us know in the comments!