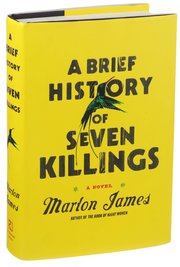 They think my mind is a ship that sail far away. Some of those people in my own district. I see them in the corner of my eye. After I help them grow, they thinking me is the one now blocking progress. So they treat me like old man already, and think I don’t notice when a sentence cut short because the rest of it not meant for me. That I don’t notice that phones come to the ghetto for talking, but not to me. That I don’t notice they leave me alone. (p. 86)

A Brief History of Seven Killings is one of those stories that, due to mainstream trends and Hollywood politics, may not ever be adapted into a film. But it’s so compelling as a book that it won’t matter.

Equal parts fictionalized (yet remarkably realistic) primer on the complex and fraught Jamaica of the 1970s, Cold War narco-thriller, and cautionary tale of the dark sides of immigration and globalization, Marlon James has, in stark detail, brought an oft-misunderstood corner of the world to the fore.

Himself a native of Kingston, James writes from the first-person perspectives of a slew of recurring characters – from the white American hippie journalist with his finger on the pulse of Jamaica’s powder keg scene; to the ghost of a murdered, Jamaican politician of the old guard; to a former lover of “the Singer” (read: Bob Marley), who wants nothing more than to escape the mayhem of her native island; to the head of one of Kingston’s two rival gangs, allied with both Marley and the opposition party leader. Just to name a few.

Amazingly, unidentified gunmen did in fact invade the home of Bob Marley on the night of December 3rd, 1976. No one was killed, but Bob suffered a gunshot wound to his upper arm and his wife Rita Marley sustained a graze wound to the scalp. Marley’s manager Don Taylor suffered more considerable gunshot wounds but survived. Considering the multiple rounds fired, it’s a miracle that no one perished. But who exactly were the gunmen and why would anyone want to kill one of the most beloved artists of both then and now?

Well, you’ll have to read the book for the details. But suffice it to say, Jamaica after its independence from Great Britain in 1962 was a tumultuous place. Journalist Vivien Goldman (2006) elucidates:

Less than two decades after Jamaican independence, the system left behind by the British had frayed, and the infrastructure was crumbling. I remember arriving in Jamaica from Los Angeles once, having been shopping earlier that day, and how obscene it was to compare LA supermarkets’ towering stacks of produce with the island supermarkets, with shelves so empty they seemed to sell air. There was music, style and creativity in abundance, but shortages of everything else from rice to rolling papers. Driving anywhere was an adventure, as the ancient taxis seemed to be held together with rubber bands and hope, and the roads all over the island had potholes like craters. Power cuts were as regular as police roadblocks.

The Jamaican Labour Party (JLP) and the People’s National Party (PNP) divided the populace along strictly binary lines. The former, led by Edward Seaga, promised no-nonsense economic development with stronger ties to the USA. And the latter, with their eloquent leader Michael Manley, promised a new order of socialist reform with the support of Cuba and other communist-leaning states in the region. Understandably, both parties sought an alliance with Jamaica’s most charismatic and electrifying native son: Robert Nesta Marley.

James takes full advantage of the cloudiness of the details of this case to flesh out almost 700 pages of gripping narrative, skipping back and forth from Jamaica to New York City between the years 1976 and 1991. Employing Standard American English, Black American English, Standard Jamaican English, Jamiacan Patois, and even a smattering of Caribbean Spanish, the linguistics involved are also captivating, exhibiting James’ deep cultural dynamism.

This book is not for the faint of heart, however: Violence (both domestic and gang-related), drug abuse, strong sexual content, and graphic language pervade the text. James certainly doesn’t flee from the darker sides of the pursuit of human survival in the modern age and takes it upon himself to show how and why people do what they do to stay alive. He leaves it up to us, the readers, to decide if each character is justified in their actions.

As Publishers Weekly observes in their own review on the book’s dust jacket, “Upon finishing, the reader will have completed an indispensable and essential history of Jamaica’s troubled years. This novel should be required reading.” While there might not yet be a college course for which it’s made the reading list, I highly recommend A Brief History of Seven Killings for any student of reggae music, Jamaica, the African diaspora, the Caribbean, or the Cold War era.