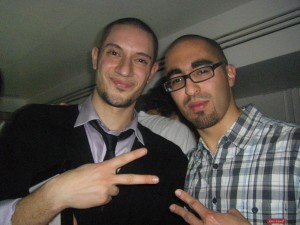 Omar Offendum is a Syrian-American artist who has worked with various international hip-hop artists and has also been featured on many news outlets such as Aljazeera and PBS, to name a few. Offendum has also given speeches at academic institutions and has also worked to raise funds for non-profit organizations and raise awareness of the humanitarian crisis in Syria. His concern for the future of the Middle East and humanity are also conveyed through his lyrics that carry a poetical message of hope, unity, and peace. As an artist, he also connects the American youth culture of hip-hop and incorporates Middle Eastern influences that invoke the similarities shared by both cultures through poetry and hip-hop.

Aljazeera broadcasted a series called Poets of Protest in 2012 about the lives, creative processes, and political events that have informed the content of the poetry of Arab and North African poets. The purpose of this show is to highlight the role of poetry in politics and the desire for a democratic reformation of foreign governments by its citizens. In this series, Aljazeera includes the stories of the poets Al Khadra, Ahmed Fouad Negm, Hala Mohammad, Yehia Jaber, Manal Al Sheikh, and Mazen Maarouf. Each poet represents a different country–Egypt, Syria, Lebanon, Iraq, Palestine, and Algeria –and offers a unique perspective of their role in Middle Eastern and North African society. This series was also the inspiration to the release of a free musical and poetical mix called “Offendum X Poets of Protest (Oo vs PP).” The collaborative project was produced by Omar Offendum and Filipino-American DJ Boo, who combined hip-hop instrumentals and samples of four poets from the series.

The importance of this mix is to combine the elements that people enjoy while listening to hip-hop, rhyme and music, and to enable the listener to connect with the poets’ stories and experiences. These two mediums of artistic expression are powerful because of their potential to inspire action and social change. Towards the end of the mix “Offendum X Poets of Protest”, Omar Offendum also offers an explanation of the historical significance of hip-hop and its relationship to Arab culture:

“hip-hop music . . . has really been about speaking to the issues that people are afraid to talk about, whether that’s here in the United States or talking about the political issues that plague the Middle East. Rap is a very direct way of doing that. Rap is a youth culture that has made its way around the globe, so it’s very powerful and it’s poetry at the end of the day . . . and that’ s something that the Arab culture can definitely associate itself with.”

While both forms of artistic creation and communication can be produced to entertain, they also have the capability to raise social awareness. Offendum and DJ Boo also elaborate on this idea by sharing this free soundscape, “Offendum X Poets of Protest (Oo vs PP),”in order to showcase the power that hip-hop and poetry have to unite, organize, inspire, and educate.

You are welcomed to listen and download Offendum and DJ Boo’s project “Offendum X Poets of Protest” for free by clicking on the link below:

To view the stories of 2 poets mentioned in this blog post, click on the link following the poet’s name:

To read the article and more on the poets from the series Artscape –Poets of Protest, go here: