Viruses have been identified as the source of a number of disease outbreaks associated with the consumption of fresh produce. Knowledge of the physical and chemical interactions of the virus with the morphology and chemistry of the fresh vegetable leaf and tomato is required for effective prevention of viral contamination and effective produce sanitation. This knowledge is, however, lacking. We hypothesize that the attachment/detachment mechanisms of viruses to/from fresh vegetable leaves and tomatoes depend on topography and chemical characteristics of the cuticular surfaces. We further hypothesize that because the topography and chemical characteristics (cuticular wax deposition) of the vegetable leaves and tomato fruits vary among vegetable species and over the period of leaf and tomato development and expansion, the attachment/detachment of the virus will also depend on plant species and leaf and fruit age. The knowledge gained from testing these hypotheses will allow the selection of sanitation methods based on the combined effect of ultrasonication and sanitizer to enhance the inactivation and removal of attached viruses from the produce. Two diarrhea causing culturable viruses, murine norovirus and rotavirus, will be selected as model organisms. Leafy salad greens and tomatoes will be selected as model produce. The experimental plan is designed for the following specific objectives: 1) Determine the attachment/detachment mechanisms of murine norovirus and rotavirus on selected leafy vegetable plants and tomatoes grown in a greenhouse; 2) Develop an effective virus decontamination protocol for these produce; and 3) Determine the damage to the viral capsid and genome associated with combinations of ultrasonication and/or new sanitizer compositional treatments.

We have determined the number of rotaviruses adsorbed on produce surfaces using group A porcine rotaviruses and 24 cultivars of leafy vegetables and tomato fruits. We also characterized the physicochemical properties of each produce’s outermost surface layer, known as the epicuticle. The number of rotaviruses found on produce surfaces varied among cultivars. Three-dimensional crystalline wax structures on the epicuticular surfaces were found to significantly contribute to the inhibition of viral adsorption to the produce surfaces (p = 0.01). We found significant negative correlations between the number of rotaviruses adsorbed on the epicuticular surfaces and the concentrations of alkanes, fatty acids, and total waxes on the epicuticular surfaces. Partial least square model fitting results suggest that alkanes, ketones, fatty acids, alcohols, contact angle and surface roughness together can explain 60% of the variation in viral adsorption. The results suggest that various fresh produce surface properties need to be collectively considered for efficient sanitation treatments. Up to 10.8% of the originally applied rotaviruses were found on the produce surfaces after three washing treatments, suggesting a potential public health concern regarding rotavirus contamination. 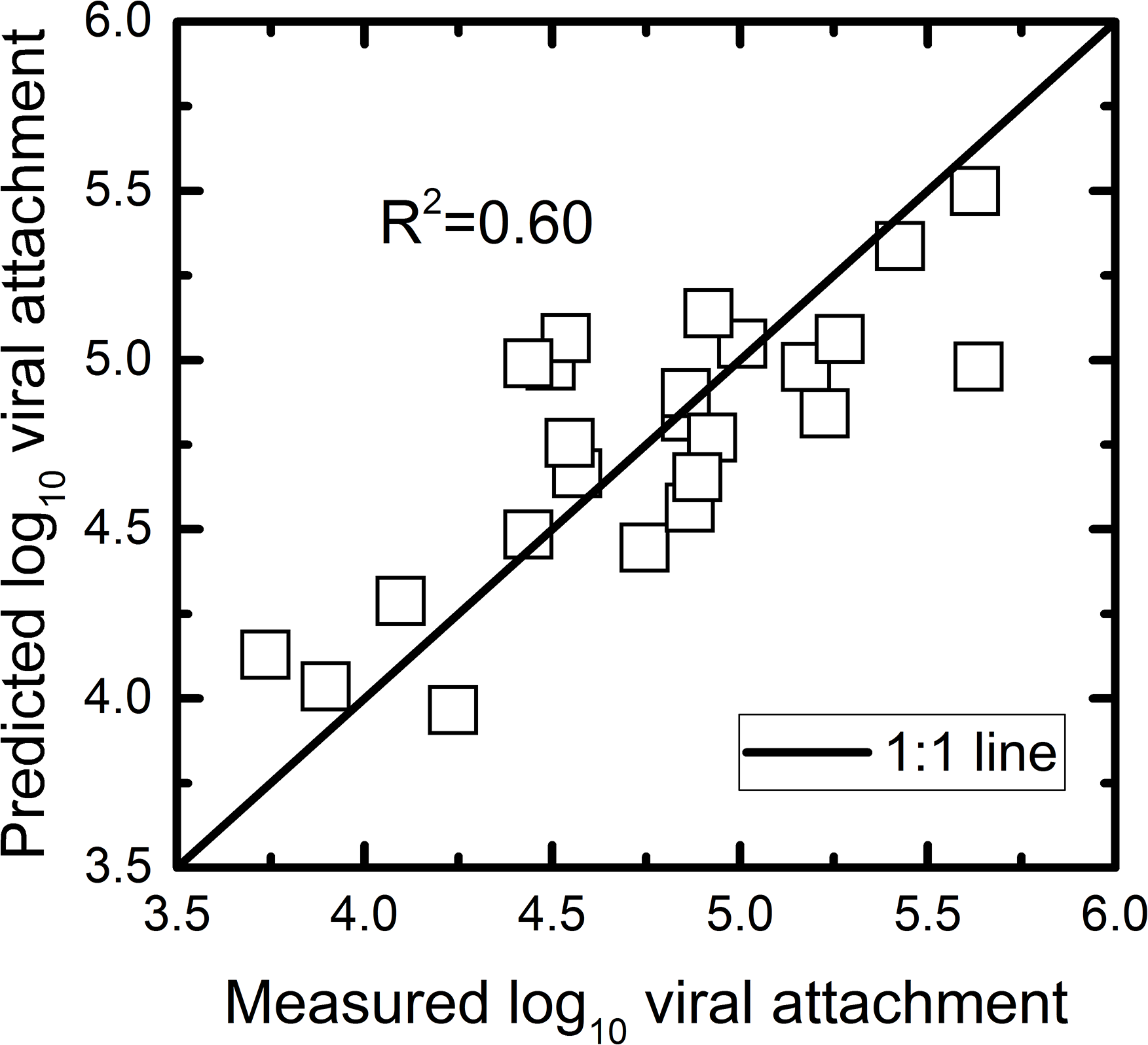