RSS feed for this section 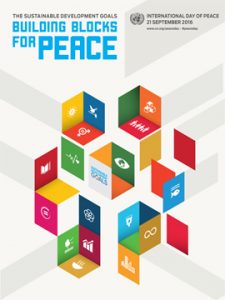 “Let us all work together to help all human beings achieve dignity and equality; to build a greener planet, and make sure no one is left behind.”

On September 21st, the United Nations celebrated an International Day of Peace. Secretary General Ban Ki-moon opened up the celebration by ringing the Peace Bell and observing a minute of silence at the UN Headquarters’ Peace Garden. This year’s theme, “The Sustainable Development Goals: Building Blocks for Peace”, aims to “strengthen the ideals of peace, both within and among all nations and peoples” (UN.org). Quoted as integral to achieving peace in our time, seventeen sustainable development goals were unanimously adopted by all 193 UN Member States in 2015. The UN’s 2030 agenda calls on all Member States start achieving these goals over the next fourteen years, addressing challenges such as poverty, environmental degradation, racism, corruption, and much more. This day was particularly meaningful in the wake of major global events, such as: the referendum in the U.K., the conflict in Syria, global warming concerns, constant tensions with North Korea, the presidential election in the U.S., protests in Burundi, genocide in the Democratic Republic of Congo, pollution and forest fires in Indonesia, and political turmoil in various South American countries, amongst others.

This International Day of Peace coincided with the September 19th high-level UN Summit for Refugees and Migrants, held in New York City, New York. With roughly 65 million forcibly displaced persons – which includes 21 million refuges and 3 million asylum seekers – and little indication of these numbers decreasing, more immediate action from a supranational level is needed (United Nations General Assembly, September 2016: 2). This was first time the General Assembly called for a summit of this magnitude for the large movement of peoples, offering a momentous opportunity to bring “countries together behind a more humane and coordinated approach” and “a better international response” on the refugee crisis (UN.org).

“This week’s summits only served to expose the leadership crisis. With few exceptions, many world leaders failed to rise to the occasion, making commitments that still leave millions of refugees staring into the abyss.”

Response to the outcome of the Summit has been less than favorable for these global leaders. Amnesty International considers this but a small step forward in the global refugee crisis. Commitments made by global in similar ‘summit’ style gatherings are known to promise much and deliver little (i.e., the Paris Climate Deal). The responsibility of larger, more wealthy countries with humanitarian crisis have often been ignored, with Amnesty International maintaining that money cannot be the sole remedy to this worldwide problem. With the crisis far from over and an International Day of Peace stained with global predicaments, the General Assembly has a long road ahead before achieving the UN’s 2030 goals.

Chami, G. 2016. “Governance and Security in an Age of Global Flux.” International Journal of Interdisciplinary Global Studies 11, no.2 : 1-14.